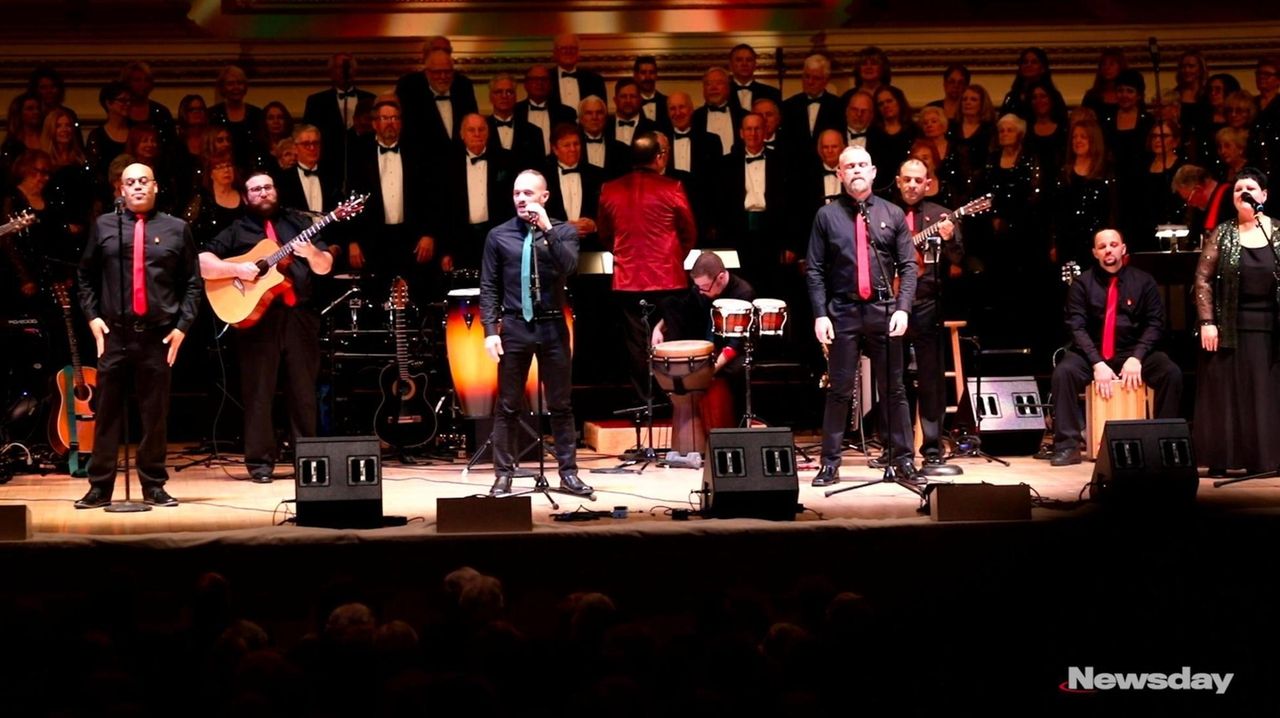 A group of recovering addicts from Hope House in Port Jefferson performed at Carnegie Hall on Monday as part of a benefit show for the rehabilitation center. Credit: Linda Rosier

In the depths of his addiction, Jay Mauro used to walk in a haze past Carnegie Hall on the way to see his dealer for his latest fix of crystal meth.

The Bellmore native did drugs on and off for 20 years and became a dealer himself. He ended up serving nearly 3 years in federal prison, in part for shipping drugs across state lines.

So on a recent night he was nothing short of astonished to find himself back at Carnegie Hall — this time onstage performing in front of 3,000 people in one of the world’s most famous showplaces.

The appearance was “surreal,” Mauro said. But soon “the nerves melted away and I wanted people to be inspired.”

Mauro, 46, is the lead singer of HIMS and Her, a musical group of about a dozen men from Long Island who are trying to resurrect their lives after they were almost destroyed by drugs. They formed the group at Hope House Ministries, a residential drug rehabilitation center in Port Jefferson. It is run by a Roman Catholic priest who during four decades has turned around the lives of nearly 10,000 heroin addicts and other substance abusers.

The performance at Carnegie Hall on Monday night was part of a fundraiser organized by Hope House and headlined by the popular tenor Andy Cooney. But the HIMS group got an equally warm reception, as the crowd cheered men who have lived in cars, lost jobs, dropped out of school, alienated loved ones, felt suicidal, nearly overdosed and served time in jail.

Now they are transforming their lives in part through music.

“Four months into the program I am doing great things,” said Len Lopez, 40, who grew up in West Babylon and is the newest member of the group. “I am already at Carnegie Hall, so only God knows what will happen musically.”

The Rev. Francis Pizzarelli, the founder of Hope House, said the musical group is one of the most special aspects of his ministry of rescuing addicts — with the appearance at Carnegie Hall a highlight.

“I think it is just another example of the miracle of God’s plan,” Pizzarelli said backstage Monday night, minutes before the show kicked off. “What’s been so wonderful is that their music has a message, and it’s a message that people do get better, that you can have your life transformed and changed.”

The group started about three years ago after Pizzarelli added to Hope House's collection of buildings by acquiring the nearby Little Portion Friary in Mount Sinai. The nearly century-old, two-story retreat house was in danger of being bulldozed, because the Episcopal-affiliated Franciscan Brothers who owned and ran it were running out of money and men.

Pizzarelli took it over in 2015, returning to where his work had started in 1980 in a cottage he rented on the property. The men helped repair the aging friary, and some moved in Dec. 23. That first Christmas Eve, Mauro — who performed in plays such as “Mame,” “42nd Street” and “Grease” at Wantagh High School as a teenager and long dreamed of a career onstage — asked if he could sing at the Mass celebrated by Pizzarelli.

He performed “O Holy Night,” accompanied by another Hope House resident on guitar. It stunned the other residents.

Soon, some with their own long-latent musical talents approached Mauro, and they formed a group. They started playing at the daily Masses celebrated by Pizzarelli, a member of the Montfort Missionaries order of Catholic priests and brothers.

Eventually the men called the group HIMS — which stands for Hope Inspired Men Sing and is a play on words with hymns — and Her, since there is one female member, Janet Brennan, a longtime Hope House employee and its current CFO, who sings.

The group performs what it calls inspirational and spiritual songs, often doing covers of popular numbers such as John Lennon and Yoko Ono’s “Happy Xmas (War is Over)” and “Someone I Used to Know” by Zac Brown Band. They sometimes change the lyrics to reflect their own journeys. Songs like “Someone,” which talks about hitting “rock bottom,” already do.

They play drums, guitar, keyboard, and the “cajón” or “box,” and have several singers. On Monday the group dressed in black shirts and pants, with different-colored bright ties. They played three songs at the start of the second act.

Cooney has long supported Hope House, whose $7 million annual budget comes entirely from donations, and he used to headline an annual fundraiser for the nonprofit at St. Joseph’s College in Patchogue. As he became more popular and Hope House expanded, Cooney decided to incorporate the organization into one of his shows at Carnegie Hall.

The HIMS first performed there in 2017. Monday was their third appearance, though some members have changed. They range in age from their 20s to 40s.

“People are very taken of course by their journey, their story,” Cooney said during a break in the preconcert sound check Monday afternoon. “It gives great inspiration to people.”

During their concerts, in between songs, members of the HIMS tell some of their own personal stories of addiction and recovery.

They perform in churches, schools and at anti-addiction events.

They will be taking their show on the road again soon. In January they head to Israel on a 10-day pilgrimage with Pizzarelli during which they will perform in Bethlehem and Jerusalem.

The group has played a critical role for many of the members in their transformation, which is also fostered by counseling, prayer, work, study and sometimes classes at local colleges. There is no limit on how long they stay at Hope House, and the program is free.

“The music group has majorly impacted my recovery,” said John Valinoti, 34, a Ronkonkoma native who as a teenager lived out of a car for months. A year ago he did not play any instrument but took up the “cajón” and practiced every day for four hours to make it to Carnegie Hall.

For some of their relatives, the group and its impact on their sons is also extraordinary.

“It’s a miracle,” Mauro’s father, Paul Mauro, said in the lobby of Carnegie Hall before the show. “Jay’s trail led to some serious stuff … and here he is now, playing keyboard again at the age of 46 in one the greatest showplaces in the world. That’s pretty amazing.”

Jay Mauro said the concert made him come full circle in a way.

“I clearly remember walking past Carnegie Hall one night when the concert, whatever was going on there that night, was getting out, everyone was coming out dressed beautifully, and I can’t even make eye contact with anybody,” he said, because he felt so ashamed as a drug addict.

“All the dreams that I had [when I was] younger of being a performer and a singer just seemed so far out of reach at that point,” he said.

Today, while still living at Hope House, he is back in school full time, majoring in musical theater at Five Towns College in Dix Hills.

“To go from a meth addict to touring the Holy Land to this” at Carnegie Hall, he said, “is proof of the power of hope.”