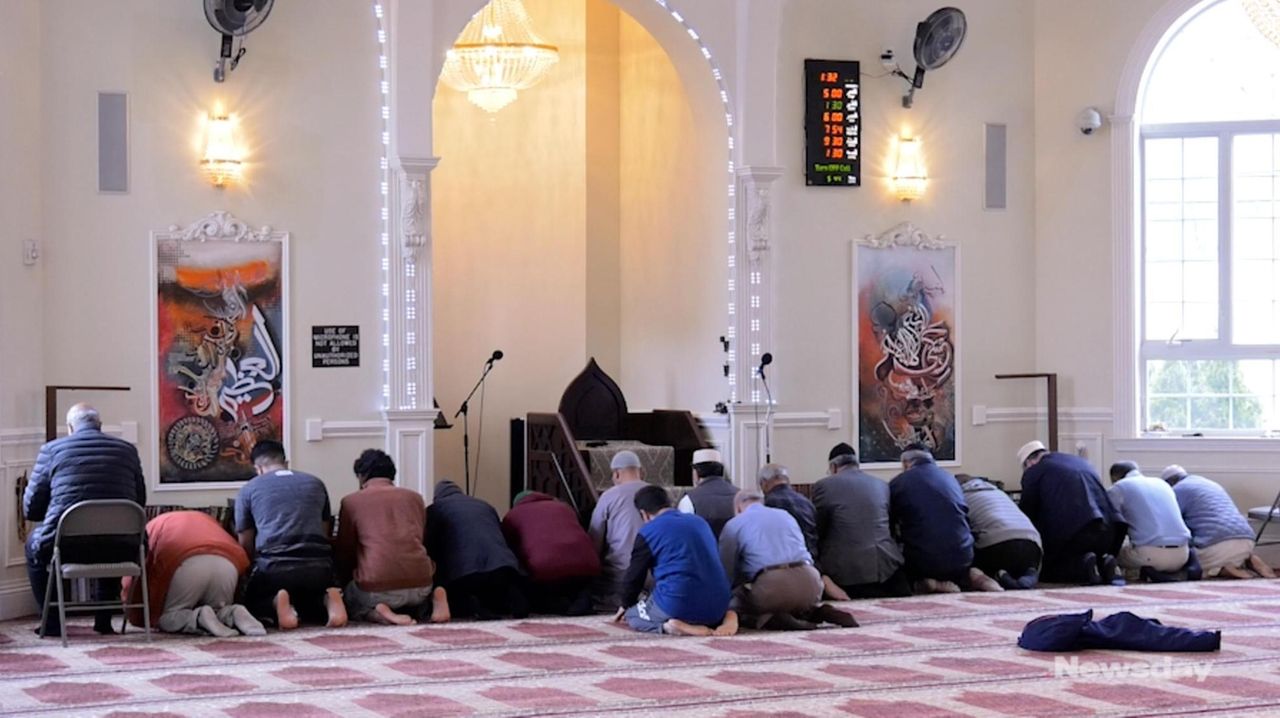 Mosques across Long Island are hiring armed security guards for Islam’s holy month of Ramadan after a string of violent attacks on houses of worship worldwide.   Credit: Newsday / John Paraskevas

Mosques across Long Island are taking the unprecedented step of hiring armed guards for Islam's holy month of Ramadan after a string of terrorist attacks on houses of worship worldwide.

At least 10 of the roughly 30 mosques — from Bethpage to Bay Shore and beyond — have put in extra security measures for Ramadan, which starts Sunday, said leaders of the Island's Muslim community, which stands at 80,000 and growing.

Nassau and Suffolk police also are stepping up patrols, as well as the State Police.

The 30 days of Ramadan commemorate when the prophet Muhammad received Islam's sacred text, the Quran, from the archangel Gabriel in the seventh century. Muslims mark each day with prayers, fasting from dawn to sunset and a special meal in the evening.

"It’s very sad that in this day and age in America you have to have an armed guard while you are praying,” said Nayyar Imam, a leader of the Selden-based Muslim Alliance of Long Island. “We have to do it. We don’t have a choice. God forbid something happened, nobody will forgive us forever.”

In the past two months, hundreds of followers of the three major Abrahamic religions  — Christianity, Islam and Judaism — have died in shootings and bombings in New Zealand, Sri Lanka and the United States.

The spike in violence started on March 15 when 51 Muslims died in shootings at two mosques in Christchurch, New Zealand. Five weeks later, on Easter Sunday, suicide bombers linked to the Islamic State hit three churches and three luxury hotels in Colombo, Sri Lanka, killing more than 250 possibly in retaliation for the Christchurch massacres.

And a week ago Saturday, on the last day of the Passover celebration, a lone gunman killed a woman and injured a rabbi and two others at a synagogue near San Diego. The suspect, who claimed to be a member of a small evangelical denomination, also took responsibility for setting a fire at a mosque in the area.

Right after the New Zealand attacks, the Long Island Islamic Center in Westbury hired an armed guard — for the first time since its founding in 1982 — and two unarmed guards.

The security detail is on duty several hours every Friday, Saturday and Sunday during prayer times and weekend school for children, leaders of the mosque said.

“Every time I walk in the mosque, I see this gentleman and honestly my heart sinks,”   Isma Chaudhry, the center's president, said of the armed guard.

Hate-fueled violence, Chaudhry said, is “getting into space where people gather to glorify God, to worship, to meditate, to find peace.”

More and more of the 3,000 mosques across the country are hiring armed guards, according to the Council on American-Islamic Relations, the nation's largest Muslim civil rights group.

On Monday, the council called on mosques in the United States to take extra precautions during Ramadan, which ends June 4 with a three-day festival, Eid al-Fitr.

The Hillside Islamic Center in New Hyde Park is hiring three guards — one armed and two unarmed, said Abdul Aziz Bhuiyan, who chairs the mosque's board of trustees.

The mosque debated the move for months, he said.

“You have all these crazy people,” Bhuiyan said. “If you have an armed guard at least there is a chance the culprit or the perpetrator can be apprehended before he does any damage to the people coming to the center.”

The length of Ramadan presents a particular challenge because mosques must be open nearly around the clock, from prayers at dawn to the reading of the Quran after dusk.

And all the extra security measures come at a price — financially and emotionally, mosque leaders said.

Wages for the guards will run into the tens of thousands of dollars for the holy month alone. The Westbury center, for example, is asking congregants to increase their donations to help cover the $15,000 in additional security expenses.

For the leaders, though, the greater cost — by far — is the psychological toll that the heightened security will take on the faithful.

A mosque is intended to be a welcoming haven of peace and God’s love, a mission contradicted by an armed guard at the door, the leaders said.

Ramped-up security can create a "sense of insecurity" for worshippers that the Islamic Center of Melville doesn't want, said Mohsen Zamzam, the center's president.

Ramadan at the mosque this year will be much like it was last year — without an armed guard.

“People get a little bit paranoid when they see armed guards, especially the kids,” Zamzam said. “We try to give them an environment that is fear free. … You put armed guards, there is a threat in there.”

The names are catchy: "Caretakers of the Congregation" and "Safety in the Sanctuary.”

But the purpose of the training programs offered by the Nassau and Suffolk police departments is serious: How to respond if a gunman opens fire in a house of worship.

At a security workshop for Muslim leaders last week, Suffolk officials started with a big dose of reality: Prepare yourselves because mass shootings are a fact of life.

“They are not going away,” Det. Clifford Lent of the department's Homeland Security and Criminal Intelligence Bureau told a group of about 30 at the Fourth Precinct in Hauppauge.

Lent walked through an anti-terrorism program that included actual footage of mass shootings and a re-enactment of a potential attack. He provided tips about what to do during a mass shooting and how to prevent one.

For many in the room, Lent's presentation was bone-chilling but worthwhile.

“We are going to get all the training we need,” said Shaheed Malik of the Masjid Allahu Akbar mosque in Wyandanch. "It is critical."

Nassau officers have made 25 "Caretakers" presentations since the program's launch in 2017.