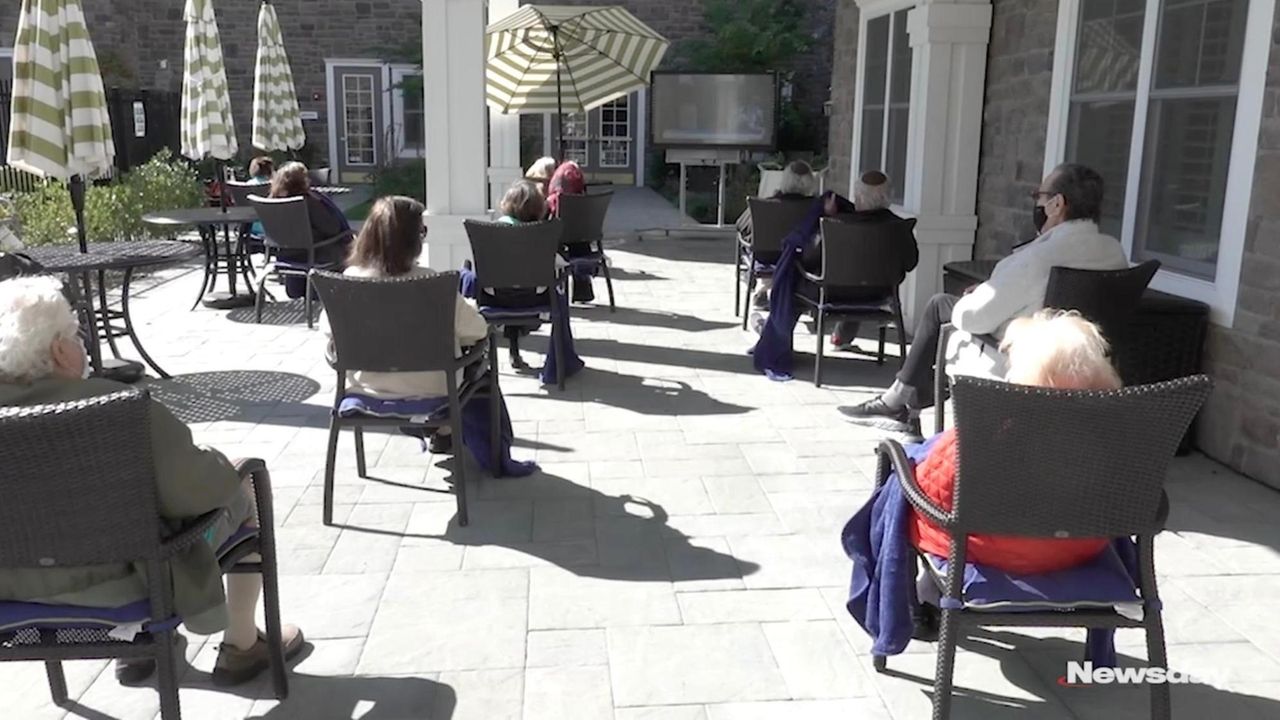 Rosh Hashanah, the Jewish new year, is usually celebrated with big family dinners and sitting in crowded synagogues. But because of the coronavirus, residents at the Bristal in Jericho sat on the patio Saturday to watch a livestream of Midway Jewish Center's Rosh Hashanah service that the Syosset synagogue transmitted for those confined at home. Credit: Debbie Egan-Chin

For many Jews, Rosh Hashanah is a time for big family dinners and sitting in crowded synagogues to celebrate the Jewish new year.

"It’s tough this year because there’s no family around," said Arthur Peck, 89, a resident of the Bristal at Jericho, an assisted-living community. "Normally this time of year there’s big dinners two or three times a week with family."

Peck was grateful that, on Saturday morning, he was able to sit with 11 other Bristal residents on the patio to watch a livestream of Midway Jewish Center’s Rosh Hashanah service that the Syosset synagogue transmitted for those confined at home because of COVID-19. Others watched inside. It offered "a sense of belonging," Peck said.

The synagogue streamed the service to all 15 Long Island Bristal locations. It will also livestream a Sunday Rosh Hashanah service, as well as Yom Kippur services on Sept. 27 and 28, said Rabbi Joel Levenson, associate rabbi at Midway.

"We find strength in coming together," even if it is virtually, he said.

"At a time when there’s so much that can cause us worry, we can be comforted by the words and the melodies of our tradition, knowing that we have been through tough times before, and we’ll get through this tough time as well," Levenson said.

Even in person, the service was unusual. Instead of 800 people packed into the synagogue’s sanctuary, there were 200 masked worshippers spaced apart to allow for social distancing. There were an additional three outdoor services under tents, Levenson said.

Bristal residents sat on socially distanced wicker chairs as they watched the service on a large-screen television, some covered in blankets on a crisp autumn-like morning.

Marlene Peck, 85, Arthur Peck’s wife, said that amid a pandemic that has kept her confined to the Bristal for the past six months except for doctor appointments, "It’s like our life is continuing the way it used to be."

"The religion that I have, I don’t want to lose it," she said. "I can’t celebrate with my family, which is very, very difficult. At least if we have the service, I feel a part of the religion, and of the customs."

For Arlene Becker, 90, this has been a hard year not only because of COVID-19, but also because of the death of her husband — of non-coronavirus-related causes — in June.

Midway was where the couple would spend Rosh Hashanah every year, and seeing the livestream helped her get through the first holiday without him.

"It was familiar scenery and familiar sounds," she said.

For Renee Greene, the service was a "measure of comfort" both from being away from a synagogue for Rosh Hashanah, and because she was distraught over the Friday death of Supreme Court Justice Ruth Bader Ginsburg and worried about the country’s future without her.

Gerry Lauber, 77, said living at an assisted living community during a pandemic is isolating. Saturday’s service, he said, "brings a sense of humanity, that you have a connection with people who are living a more normal life."