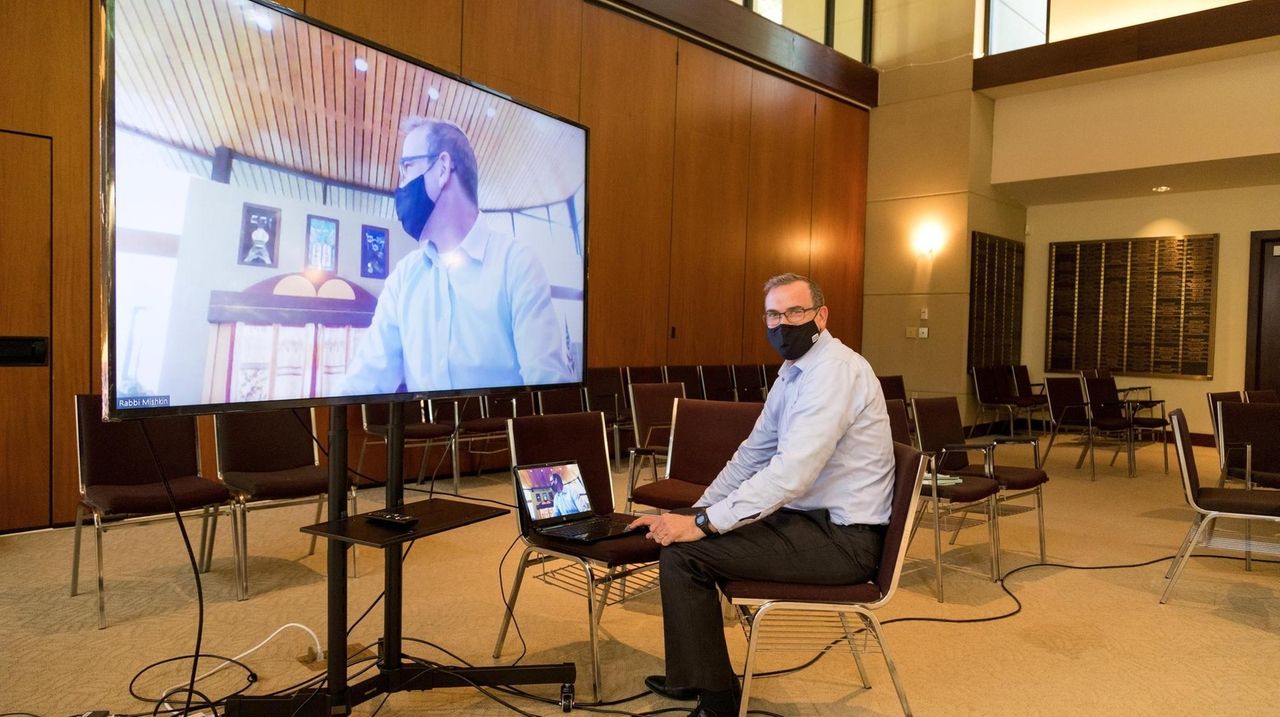 The coronavirus pandemic is forcing rabbis and congregations across Long Island and the world to adjust yet another tradition: Yom Kippur, the most solemn day of the Hebrew calendar. Credit: Barry Sloan

But this year, in yet another tradition truncated during the coronavirus pandemic, close to a third of his worshippers for the holiday — Judaism’s Day of Atonement — are expected to stay home, recite the prayers without a congregation, and rely on the rabbi to read off each loved one’s name from the pulpit.

For those who attend in person, where occupancy is capped to curb the virus’ spread, the rabbi’s sermon will focus on the sense of isolation during months of lockdowns and social distancing and Zoom video conferences — what’s changed and what’s timeless.

"The idea of Yizkor is, the spirits are never Zoomed out. They’re always zoomed in with us," said Gurkov, who runs the Chabad of Oceanside he founded 20 years ago and is planning to preside over abbreviated Yom Kippur services, in person, not on Zoom, starting at sundown Sunday, and continuing again in the morning until the next sundown. "They’re always there off screen, vouching for us and giving us strength to get through everything we need to get through."

For Yom Kippur, which is nearly 26 hours long and one of the most crowded days for synagogue attendance, Jewish clergy have tweaked the rituals and logistics of the Hebrew calendar’s most solemn day, of which the Yizkor service is just one part.

To the most observant Jews, as at Gurkov’s Chabad, electronics are strictly forbidden, so there are only in-person services. But less strict congregations are offering streaming, including the "Al Chet" confession of sins, the Yizkor memorial service and the final blowing of the shofar.

At Temple Beth Israel in Port Washington, Rabbi Michael Mishkin and his congregation’s cantor are to livestream services from inside the empty sanctuary, including on Monday 6 hours long instead of 8 hours in person other years.

Worshippers can participate via a giant TV screen installed, post pandemic, in the sanctuary, with honors, known as aliyahs, and readings from the Torah.

But even as e-participation is invited for a holiday with roots dating more than 3,000 years to after the Israelites had left Egypt and sinned by worshipping the Golden Calf but were forgiven by God, congregations on Long Island and around the world must fortify their services to avert a 21st century sin: Zoom-bombing — disruptive, unwanted intrusion, usually by internet pranksters, trolls and hackers — according to Rabbi Joel Levenson, president of the Long Island Board of Rabbis.

Among the solutions: requiring passwords, and not posting them online for anyone on the internet to abuse, so somber rituals aren’t disrupted.

For the first time since after Jack Mishan's mom, Lena, died in 1996, he won't be attending a Yizkor service in person, nor will his wife, Debbie, who began attending after her dad, Stuart Stone, died in 2007.

On Monday, the couple, each 58 and of Port Washington, are to recite the prayers virtually, via Temple Beth Israel’s service livestreaming over Jack's home-office PC.

Mourning in the same room as others offers a comfort and a power that can’t be matched by digitized ritual, said Mishan, who will also pray for his dad, Avner, who died in 2015, and his wife for her mom, Eileen, who died in 2016.

"It’s not going to be the same. It can’t be," he said. "It won’t have the same powerful meaning."

The truncated holiday rituals extend to traditions beyond the synagogue.

Just as fewer people are gathering in person to worship, meals before the fast and to break the fast are expected to be smaller, with less food, according to eateries that usually count on the pre- and post-holiday business.

According to a 2013 report from the Pew Research Center, about 53% of Jews in the United States reported that they fasted for all (40%) or at least part (13%) of the day on Yom Kippur.

Gilah Salzano, vice president for the deli chain Ben’s, which has for 48 years catered meals before the fast, customers have hedged on ordering this year because of the possibility that rain might ruin outdoor celebrations or that a guest might get sick from the virus.

Sales, she said, are down 40% in all stores and 20% at the three on Long Island for the Rosh Hashanah and Yom Kippur holidays, and customers seem to be waiting until the last moment to order.

"People don’t come out if they have a sniffle because of this pandemic," she said.

At Bagel Boss Hicksville, which since 1975 has catered break-the-fast meals to be eaten after sunset on the day of Yom Kippur, orders were at 30% or 40% of normal, manager Paul Scarione said as of Friday. Instead of a gathering ordering a platter for 12 or 18 people — a platter for 12 is $379 and includes nova, filleted white fish, baked kippur, salmon, cream cheese, lettuce, tomato, tuna, egg salad, herring, challah bread and cake — it's just bagels, tuna and egg salad, for five or six people, sometimes for a little as $50, he said.

"Uncle Bob ain’t coming, so they’re just getting what they would eat," he said.

The uncertainty has complicated the store’s ordering of inventory, particularly fish, since it’s been unclear how many customers will order at the last minute — or at all.

"People are waiting because they don't know what to do," he said. "They don't know if their family are going to come over or not."