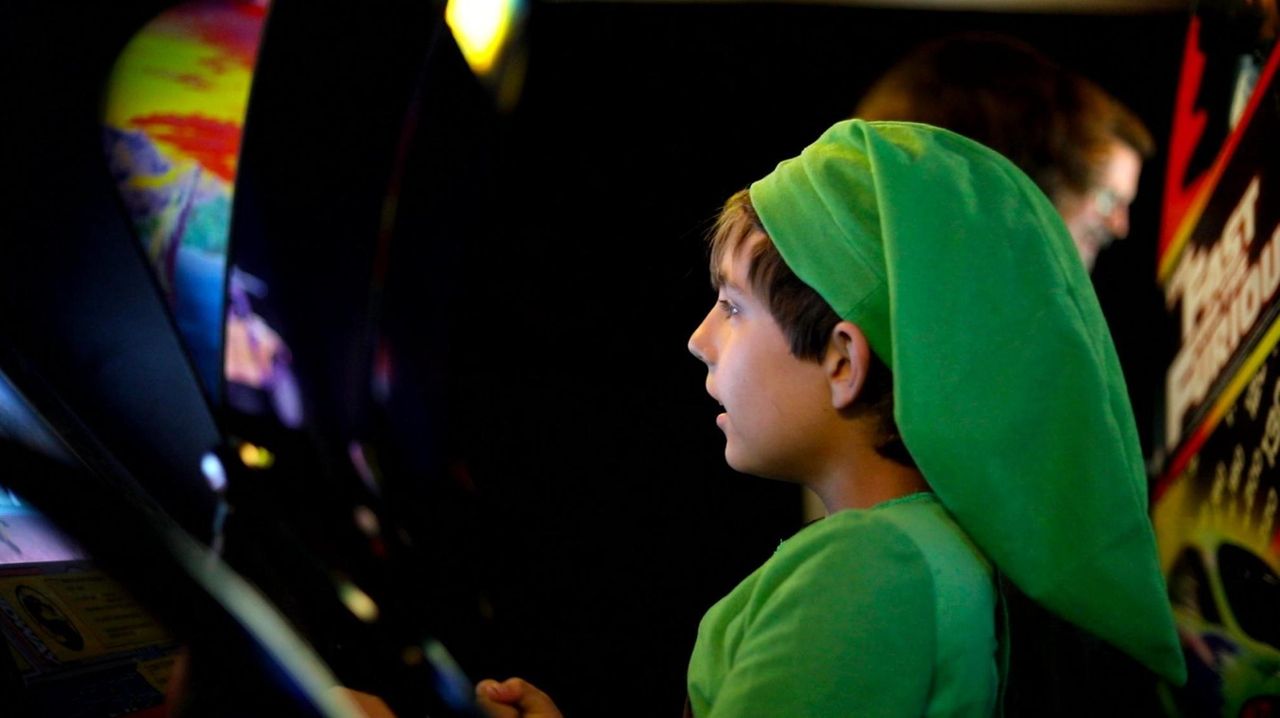 Each month, Tristan Whitworth, the owner of retro video-game store Game On in Miller Place and Smithtown, hosts a free two-hour game night as a way to provide families with a haven to play together without fear of standing out or feeling different. Credit: Morgan Campbell

Amid the beeps and boops of classic video games, more than a dozen children play together or alongside each other at tables in the dining area at North Shore United Methodist Church in Wading River. They laugh and yell as they battle each other in Super Smash Bros. or chatter excitedly as they build fantastical structures in Minecraft. Nearby, other children play board games a bit more quietly, and still others munch on pizza and soda. Their parents mostly look on or talk among themselves.

On many such evenings, the children and their parents wear special game night T-shirts, and for October’s gathering, attendees were encouraged to come dressed in video game-themed Halloween costumes. Some came as characters from such games as “The Legend of Zelda” and “Fortnite,” while others dressed as animals, cheerleaders and characters from “Winnie the Pooh.”

The Autism Social Club & Game Night is the work of Tristan Whitworth, owner of retro video-game store Game On in Miller Place and Smithtown. Whitworth hosts the free two-hour sessions on the last Friday of each month to give children with autism and other special needs and their families a safe haven to play together. Siblings are also welcome.

“They’re obsessed with these retro games,” Whitworth said about the children, “but they don’t get to play them because some of them are really expensive, and they never grew up with them. A lot of kids on the [autism] spectrum can become obsessed with one thing, whatever that is, and for these kids it’s retro games.”

At each game night, Whitworth orders pizza and sets up portable televisions with retro video-game systems including Super Nintendo, PlayStation 2 and Nintendo Wii. Kids play with each other and their parents or siblings. Occasionally, Whitworth hires a Mr. Softee truck to serve ice cream. A quiet area with board games allows children to escape the noise as needed. On the last Friday in October, when Whitworth encouraged Halloween costumes, he gave out candy in goody bags.

An idea that grew

Whitworth started the game nights after-hours in his store in September 2016 as a way to give several customers and their kids a place to play games and socialize with other children. He said the idea for the event stemmed from discussions he had with parents who brought their children to shop at his store and who confided that there weren’t any such social events for children with autism.

“A kid would come in, sit down and not talk,” he said of the children’s initial visits to his store. Whitworth said after hosting several gatherings, he began to see the children who had previously been nonverbal begin to interact with one another.

“I saw those kids start to make friends with the other kids, and really get along and make real friendships,” he said. The children also began greeting him after entering the store and talking to him about video games. “A lot of people really broke out of their shell,” he said.

The game nights quickly outgrew his storefront, Whitworth said, so he began exploring how to create a more formal gathering. Turning to the internet, he discovered a website that detailed a monthly board-game night for families in the Midwest and decided to use it as a model for his video-game night.

Then he began looking for an affordable space, calling churches and recreation centers. He soon connected with the Rev. Hal Low, pastor of North Shore United Methodist Church, who was eager to offer the church’s kitchen and dining area for the event. Game night has been held there monthly since November 2016.

Low said it was important to him to provide the space to Whitworth because two of his three adopted children have autism, and he, too, has struggled to find free or low-cost activities that cater to the community.

“It’s definitely filling a need,” said Low, 60, of Shoreham. “I’m really impressed by what this young man is doing. He is really doing it out of his love for people.”

Since moving the club from his store to North Shore United Methodist, Whitworth said the game night has become something both children with autism and other development disorders and their parents have embraced with more enthusiasm than he could have hoped, with about 15 to 20 people showing up each month. Parents have told Whitworth that game night is something their children talk about at home and look forward to, he said.

“Someone two months ago had some kind of concert in the city, something they were waiting for, and they couldn’t decide between that or game night — and I was like ‘whoa,’” Whitworth said.

“Having something in common, something like a video game where a child who may have restrictive interests, it can be really beneficial,” said Arianna Esposito, director of Lifespan Services at Autism Speaks in Manhattan, the largest autism advocacy organization in the United States. “Playing a video game for some might be easier than engaging in a conversation, so engaging in something they like and that they are enjoying makes having a conversation sometimes less challenging.”

Kimberly Koch of Mastic has been taking her son, Zachariah, 8, to the game nights for about a year. Zachariah, she said, has a general autism diagnosis in addition to ADHD, OCD and social anxiety. “It gives him something that he looks forward to,” said Koch, 36. “He deals with a lot of social anxiety, so social settings aren’t that great for him. A lot of times he’ll just say ‘no, I don’t want to go,’ because he’s nervous about how he’s gonna handle the situation.

“But coming here, he doesn’t have that fear,” she said.

For parents and caregivers, who are required to stay with the children at the event, the game nights have also blossomed into something of a club where they can relax and form friendships with those who understand the challenges associated with raising children with autism and other special needs, including anxiety disorders and socialization issues.

“It’s a way for us to have adult time, when the kids are doing something for them,” said Diana Bongiorno, of Shirley, who has been taking her 15-year-old son, Zachary, to game nights for the past two years. Zachary, she said, has autism and difficulty with fine motor skills.

Bongiorno, 43, said that because many of the parents are also interested in video games, it gives them something to relate to with their own children.

“It’s something I grew up on, so there’s an interest for me as well,” said Zachary’s father, Thomas Bongiorno, 45.

“We get to connect with each other; we get to discuss different resources that somebody else might not know about,” agreed Koch.

Time for adults to bond

Giving parents of children on the autism spectrum time to relax and interact with one another is important, said Esposito, of Autism Speaks. “We focus so much on making sure that children on the spectrum are getting the socialization pieces and opportunities to be included in community activities, but it’s parents too who often feel isolated from social engagement and being a part of their community,” she said. “So I think that is a really unique aspect here.”

Many parents welcome game night because it provides a forum where their children can develop social skills that aren’t easily taught but that resonate elsewhere in their lives.

“You can’t teach social skills,” said Victoria Kaplan, 31, of Lake Grove, who regularly takes her son Ben, 10, to game night. Kaplan said Ben, who has ADHD and struggles with behavior and socialization with other children, enjoys game night because he can speak with other kids about video-game programming. “It’s like they speak their own language through video games. Now that he knows how to interact with kids here, he’s starting to do that at school.”

Kaplan said when her son did play with other children, he mostly engaged in “parallel play,” playing near others without interacting with them. But at game night, Ben has learned to feel more comfortable playing with children who share his interests. He has begun to interact more with Whitworth, too, whom he looks forward to seeing each month.

“I talk to them about the games I’m playing,” Ben said. “I have made a few friends. I’m pretty sure I’ll make more down the line.”

Beth Henry, of Rocky Point, who has been taking her two children, Ella, 11, and John, 6, to the game nights for the past five months, she said she has seen them learning valuable social skills. Henry said Ella has autism and ADHD, while John has ADHD.

“They have a blast,” said Henry, 45. “They are able to socialize side-by-side. The conversations come naturally.”

Matthew Gabriel, 37, of Rocky Point, has volunteered alongside Whitworth at game nights for the past two years after meeting Whitworth at his Miller Place storefront; in the beginning Gabriel also took photos and video to help promote the event on the store’s Facebook page.

Gabriel, who is also an avid video game player, said he likes volunteering each month because he enjoys seeing how excited the children get when they play together. At the October gathering, Whitworth dressed as Bowser and Gabriel as Yoshi, both characters from the Mario Bros. franchise.

“Slowly but surely they [the kids] get more comfortable and they become more familiar with people," Gabriel said. "And then the next thing you know, they can’t get inside fast enough, running away from their parents and just starting to play.”

Beginning this month, Whitworth plans to expand to two game nights a month, adding one closer to his Smithtown location to accommodate those who live in western Suffolk County. Whitworth said he has partnered with Metrocade NY, a West Babylon-based retro video-game arcade truck, to provide attendees with more free games. Metrocade, founded about two years ago by Vincent LoVerde Jr., is a 24-foot car trailer retrofitted with arcade games pulled by a bus that contains newer video-game consoles.

LoVerde Jr. said his first experience working with children in the autism community came after he helped run several autism-friendly programs with the Farmingdale Public Library. “It’s somewhere where they can feel safe and comfortable and enjoy themselves and have a good time,” he said.

Whitworth founded Game On in January 2015 as a tribute to his brother Wesley, who died in 2000. Whitworth said his lifelong love of video games came from growing up playing classic consoles like the Nintendo Entertainment System with his three brothers, the others being Brandon and Rory, as they all reveled in ’80s and ’90s cartoons, pop culture and such toys as He Man and G.I. Joe.

He rediscovered his passion for retro games after getting his undergraduate degree. Whitworth said he was on a path to a graduate degree in sports therapy, but a need for cash intervened. He began scouring yard sales for vintage games and collectibles then selling them on eBay — a course that eventually led to him opening the store.

Whitworth said it’s the little victories of game nights that make the effort worthwhile. Parents have told him that children have gone on to form their own gaming clubs at school since attending his monthly event. And at the most recent game night, Whitworth said he was greeted for the first time by a child who has come to many gatherings but had never spoken to him.

WHAT Autism Social Club & Game Night is open to children of all ages accompanied by a parent or guardian.