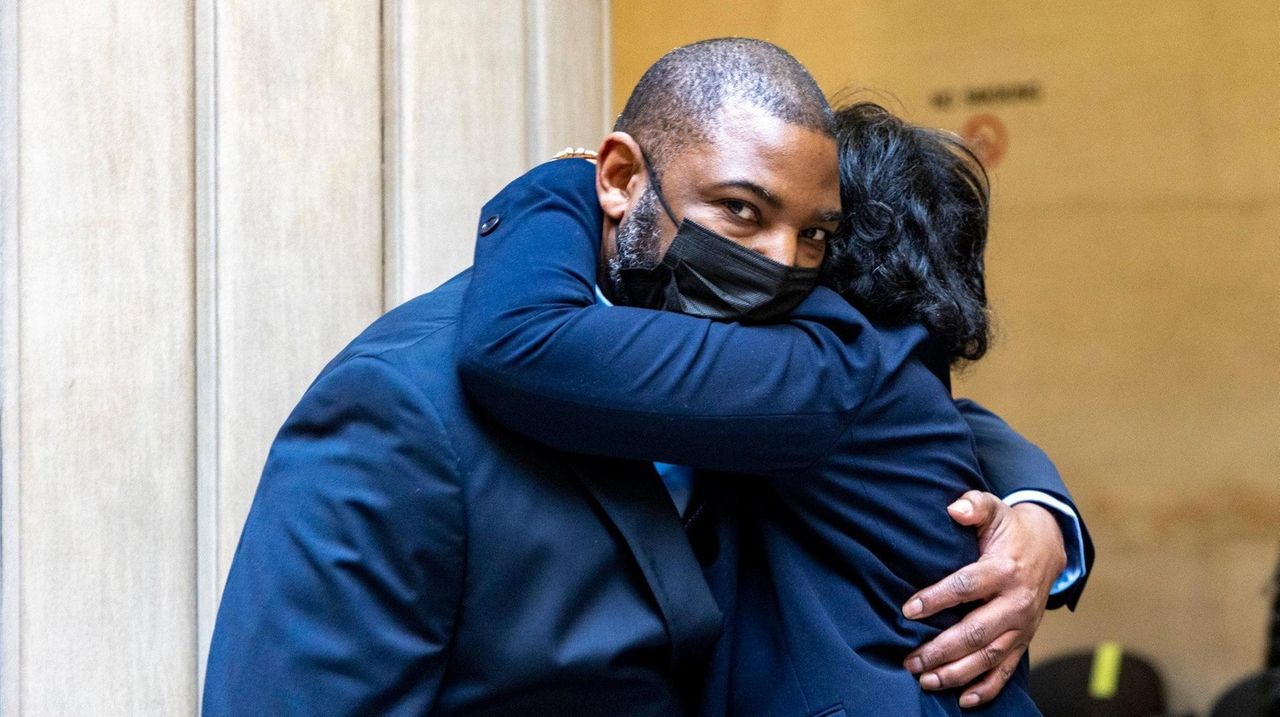 A Nassau judge acquitted Hempstead Village Deputy Police Chief Richard Holland of felony bribery Wednesday, delivering a long-sought victory to a veteran law enforcement official who maintained that the cash payment he gave a trustee who voted for his promotion was a campaign contribution.

Prosecutors had alleged Holland bought his promotion by paying off former village official Perry Pettus, who is now serving time in prison for convictions that include bribe-receiving.

Supporters of Holland broke out in applause in Nassau County Court after Acting State Supreme Court Justice Howard Sturim announced the not-guilty verdict. Holland, 50, of Hempstead, hugged his wife outside the courtroom before speaking about his acquittal.

"My faith in God never wavered. And I always knew what the truth was. ... I'm just anxious to get back to work," Holland told Newsday. "It's been a three-year battle so I'm elated to finally have the truth come out."

Holland's defense attorney, Jerald Carter, said shortly after the verdict that his client had waited years to clear his name.

"From the beginning, I've said that it was not a bribe. And ultimately it wasn't proven to be a bribe. I'm happy for my client, his family and the Village of Hempstead. And I'm hoping and praying that he can continue on as a valued member of the community and of the department," the former Nassau judge said.

Prosecutors said during the trial that Pettus and Holland separately drove to a South Hempstead restaurant parking lot on May 14, 2018, before Holland passed $1,000 wrapped in newspaper out a vehicle window to Pettus.

"Who makes a campaign contribution like this?" prosecutor Stuart Levy said in his closing argument Monday, when he played back surveillance video from the parking lot meet-up.

Prosecutors claimed the money was in exchange for Pettus’ vote on June 5, 2018, to promote Holland — then a lieutenant — as village officials were evaluating candidates to fill three top police force positions after retirements.

During the trial, prosecutors played a series of recorded phone calls gleaned from a court-authorized wiretap, including multiple conversations between Holland and Pettus, to try to show that the deputy chief broke the law.

Sturim said he was convinced Holland met Pettus "surreptitiously" and gave him $1,000, money he said Holland "hoped would help his chances in obtaining a promotion." But the judge said to prove the third-degree bribery charge against Holland, prosecutors had to demonstrate Holland conferred a benefit on Pettus because of an agreement that Pettus' vote or action would be thereby influenced.

"Under the facts of the case, I don't believe that the evidence proves an agreement or understanding beyond a reasonable doubt," Sturim concluded.

Investigators had been listening when Holland and Pettus arranged during a wiretapped call to meet in the parking lot for an exchange, a location Holland said should be "somewhere discreet," according to evidence in the case.

Two Nassau district attorney’s office investigators surveilled the meeting, and while they didn’t see money change hands, lead case detective Gavin Shea later confronted Holland about the exchange, according to the prosecution. Holland then told Shea he’d given Pettus a $1,000 campaign contribution, according to court proceedings.

A day before the cash exchange, investigators also recorded what prosecutors said was another pivotal conversation between Holland and Pettus. They said Holland told Pettus he was going to call him the next day and give him something after Holland lobbied Pettus for promotion and Pettus talked about a different police official giving him $1,000 every time he ran for office.

The bench trial before Sturim followed a mistrial in a jury proceeding last month after the judge found the prosecution didn’t disclose wiretap evidence the defense said bolstered Holland’s contention that the money was a campaign contribution.

Carter said during that proceeding that investigators had lost the real narrative of the case during what prosecutors described as an ongoing public corruption probe centered on Pettus.

The Garden City defense attorney said investigators listening in on an intercepted phone line would stop recording if Pettus started talking about local Democratic officials or his concern about getting the Democratic line in an upcoming election. But Carter said such discussions were relevant to the case.

Pettus, 65, is serving 2 1/3 to 7 years in prison after a 2020 sentencing that followed his guilty plea in a corruption case involving six separate indictments against him. With his plea, Pettus had implicated other co-defendants in wrongdoing, including Holland and village Police Chief Paul Johnson — who has pleaded not guilty in an alleged ticket-fixing scheme.

State records show Pettus’ first parole hearing is scheduled for January and that he qualifies for release on parole in May.