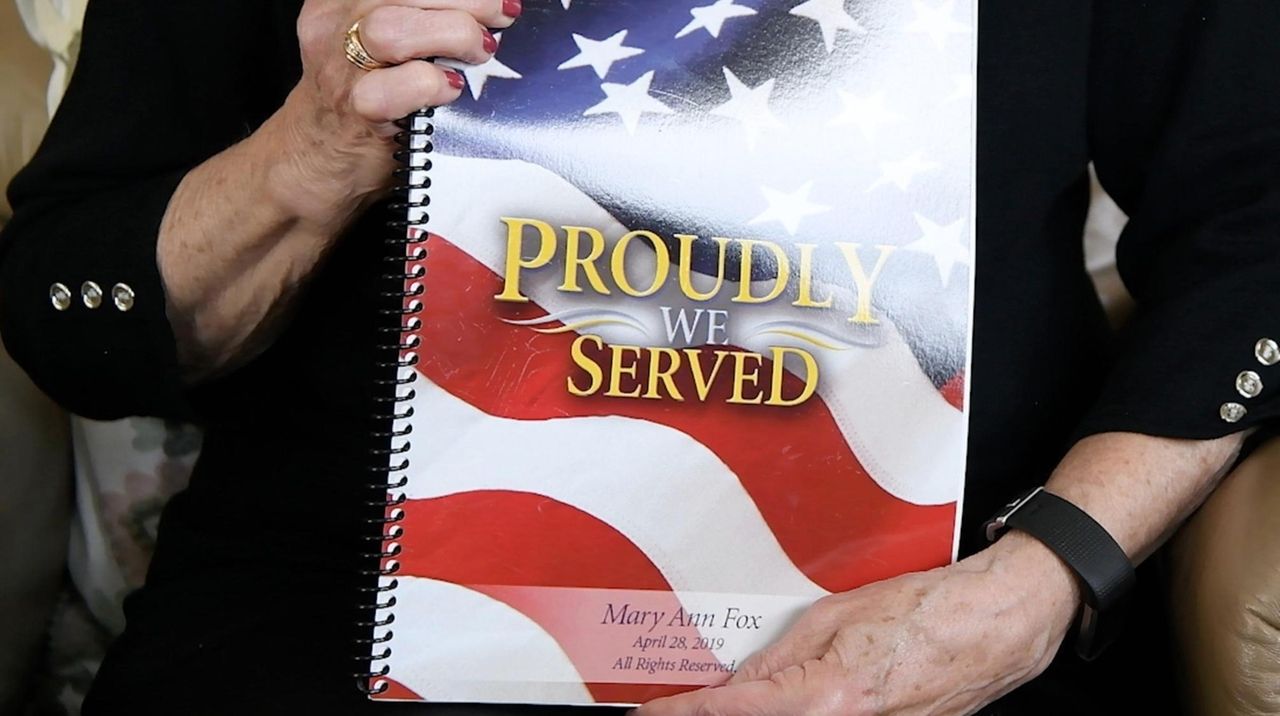 Mary Ann Fox of Ridge recently completed a 112-page book with the stories and photographs of 63 veterans in her community who served in the military between World War II and the Vietnam War. Credit: Newsday / J. Conrad Williams Jr.

Last year, during a Memorial Day commemoration at a retirement community in Suffolk County, the commander of an American Legion post looked over the audience and delivered a wistful admonition.

Get to know the stories of friends and neighbors who served in World War II and the Korea and even Vietnam wars, he urged, because not all of them — mostly in their 80s and beyond — would be around when Memorial Day next rolled around.

Mary Ann Fox, who was in the audience, recalled casting her eyes about the room, scanning the faces of neighbors she had known for years and wondering about the stories they carried inside them.

“He said we should appreciate them now because they are all moving on,” Fox said. “At some point they all won’t be here, and no one will know who they were, or the lives they lived.”

And with that, she decided to try to collect as many of those stories as possible.

Her first interview was 11 days later, when she appeared at the door of Carl Schmidt, now 95, a quiet man who told her of his service aboard a Navy ship during the U.S. invasion of the Philippines in World War II.

Last month, with weeks to spare before her self-imposed one-year deadline, Fox completed a 112-page book containing his story and those of 62 others of her neighbors at Leisure Glen — a retirement community in Ridge — who served in the military between World War II and the Vietnam War. She had 150 copies of the book made; most have been given to the men she interviewed, a few have gone to local libraries.

She distributed copies of her self-published book — a flag-adorned volume titled “Proudly We Served” — at an April 28 ceremony honoring the 63 veterans she interviewed. Two weeks ago, she shared her work during a presentation on veterans at the Albert G. Prodell Middle School in Ridge.

In ways, Fox’s book is a reflection of the relatively large number of former military personnel — more than half them in their mid-60s or older — who live on Long Island. Suffolk County is home to more veterans — an estimated 60,000 — than any other New York county, according to census estimates; Nassau adds 42,600 more veterans. Ridge alone has more than 1,000 veterans among its 10,700 residents. Leisure Glen is believed to have more than 100 veterans living in its 646 households.

Fox said her project was a simple one.

She would use her contacts in the community to get in touch with as many veterans as possible. She would collect their stories and publish them for posterity. She would do it within a year, in the hope that those who shared their memories with her would still be around when her work was done.

And to everyone who indicated they were willing, she would show up at their door armed with a pen and a yellow legal pad. She would scribble shared memories in longhand, then dash home to her kitchen table, where she transcribed her notes into a laptop computer.

“I really didn’t know how this would go,” she said. “I figured I’d see how many veterans I could reach, and who would want to talk to me and share their experiences.”

“It was slow go at first, but suddenly word of mouth spread, and I was interviewing veterans almost weekly. What I thought would be relatively short interviews turned out into three-, four- and even five-hour interviews.”

Stumped by military jargon, and minimally familiar with World War II, Fox recruited John Grady, a 93-year-old World War II veteran who lives a few streets over from hers, to do proofreading and fact-checking.

“She took a germ of an idea and, with patience and determination, it turned into this,” Grady said of Fox, an energetic woman who for 22 years operated a Lake Grove travel agency that she founded in 1986. “And she did it while our voices are still here.”

Walter Tracy, the commander of the American Legion post at Leisure Glen whose warning of the passing of older veterans helped inspire Fox's book, agreed. "It's nice that they are all being given this attention," he said.

Heroic depictions of soldiers in battle have been the stuff of movies, graphic novels, epic tales and historical literature beginning with Herodotus, whose description of the Greco-Persian Wars 2,500 years ago earned him recognition as the world’s first historian.

But the men and women who come home from the battlefield often say little of their military service, usually in an effort to put behind them war’s traumatic memories — the image of a wounded soldier stranded beyond reach in a kill zone, the desperate pounding of drowning sailors trapped in the hull of a capsized ship, the sobbing of a Marine facing amputation in a field hospital.

Such haunting memories can leave veterans reticent to tell friends, neighbors or even family members about their military service.

That certainly was true of Joseph Jareck, who lives near Fox at Leisure Glen. Jareck said he owes his promotion to Army sergeant during his 1965-67 Vietnam War service in part to the number of higher-ranking soldiers killed then.

He said after coming home from war, he had no stomach for talking about its traumatizing details. Instead, he buried his wartime memories beneath the task of building a career in the international textile business and raising a family. He said he mostly limited his conversations about his battlefield experiences to light stories about absurdities of military service.

Jareck, 73, told Newsday the most troubling memory he took home from Vietnam was that of a fellow soldier who had mistakenly pulled the pin from a hand grenade still clipped to his vest. Unable to free himself from the grenade, he doubled over to absorb the blast, hoping to spare others from the mistake that took his life.

“I don’t like to live that past,” he said grimly. “They are not good memories. Why would you want to put that burden on your children or your family?”

Those who did share memories often remain pained by them.

Thomas Devine, 92, said three of his relatives were also in uniform while he was a Navy radio operator aboard the USS Dade troop transport ship during the U.S. invasion of Okinawa. Of them, he was only sure of the whereabouts of his sister Alice Devine, who was serving in the WAVES (Women Accepted for Volunteer Emergency Service), a Navy division created during World War II to free male personnel for sea duty.

But he worried about the safety of his father, who was serving on a Navy destroyer off the coasts of North Africa, Sicily and Normandy and who a generation earlier had served in World War I. During Devine’s time at sea, he knew nothing of the fate of his brother, who had been drafted into Army in 1942.

He once confided to his wife, Irene, that it bothered him that he never knew what had become of the Marines — some of them still teenagers — that he put ashore at Okinawa. More than 12,000 American GIs never made it home from that six-week invasion of Japan’s southernmost main island.

“It bothers him, because they were such beautiful young boys who he ate with, slept with, gambled with, and never saw again,” she said. “He often wondered what happened to them, and how many of them survived.”

Fox said her interview with Andy Estrema, 90, a former Marine Corps sergeant who was nearly killed during the Korean War’s Battle of Chosin Reservoir, left her in tears.

Estrema, then 21 and stationed in Hawaii, was newly engaged and nearing the end of his enlistment during the spring of 1950.

But when Chinese soldiers poured over the border between North Korea and South Korea that June, Estrema put his marriage on hold and headed across the Pacific, still confident he would be home by Christmas.

His plans were shattered the week after Thanksgiving Day.

His unit — Fox Company, 2nd Battalion, 5th Marine Regiment — had set up a machine-gun post on a snow-covered hill in temperatures that had fallen below minus-30 degrees. He had taken off his boots in hopes of warming his feet in his sleeping bag. All was quiet at the Chosin Reservoir.

“Then suddenly, all hell broke loose,” Estrema told Fox during an interview at his home that was transcribed for the book. He saw a fellow soldier shot in the head. Moments later, amid cold so brutally intense Estrema would later have toes amputated because of frostbite, he was shot.

Fox said at this point in her interview, she excused herself, retreated to a bathroom and wept.

Fox took on the project despite having no close relatives who served in the military. Her father never joined the service. Nor did her late husband, George “Buddy” Fox, who taught physical education at Centereach High School, where their two children attended. Neither did their two children, who took up careers in business.

Fox said the only military relative she knows of was her uncle Edward Karpinski, who served in the Marines during World War II and who lived in Glen Cove until he died in the 1980s.

She said she knows so little of his military service; she never knew his rank or where he served.

“Back then, nobody talked about it,” she said.

“That’s one reason I knew other people wanted to know their family’s history in military service,” she said. “Because I didn’t know enough about mine.”

Jareck said his interviews with Fox did not include details of the horrors he encountered in Vietnam. But he was one of several interviewees who said they were honored that Fox took the time to learn a little bit about their military service.

“It’s 50 years since I came home, and this is the first time someone has tried to do this,” Jareck said. “You need someone as persistent as Mary Ann Fox was to get this off the ground,” he said of her collection of biographies. “It went farther than I thought it would. And it’s nice to be thanked after all these years.”