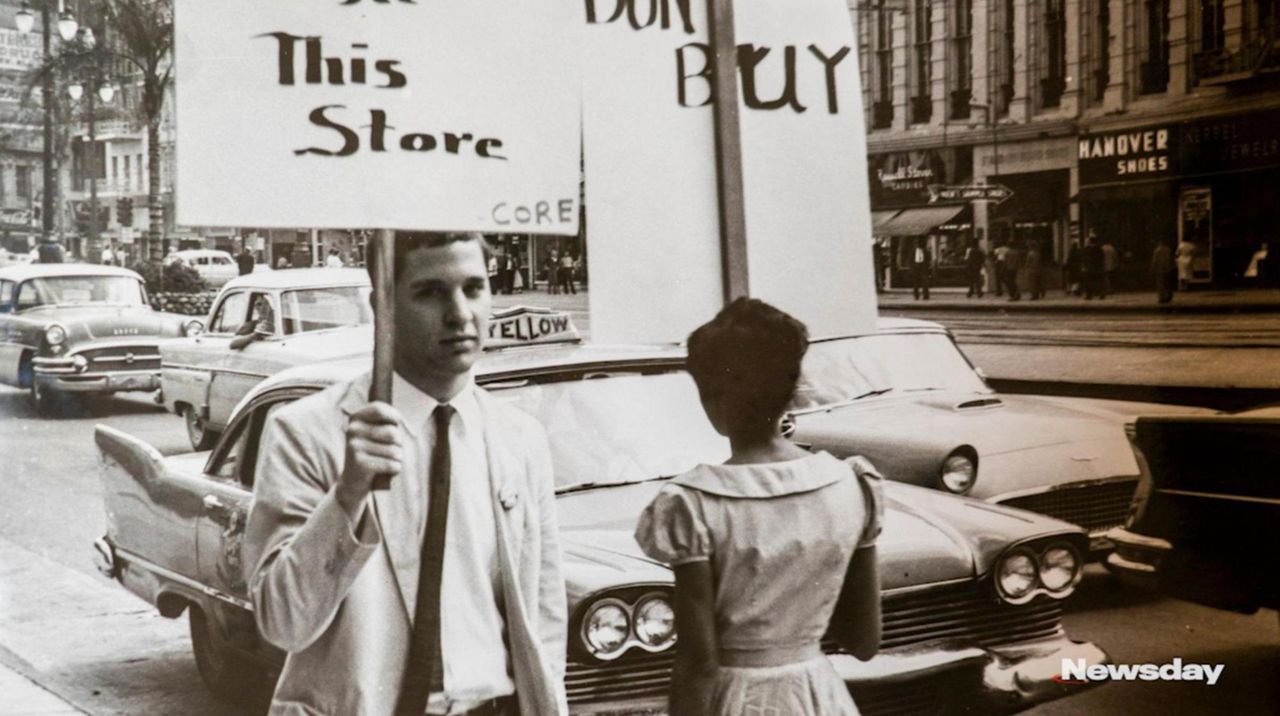 Robert Heller, who grew up in Rockville Centre, talks about his experience on the "Freedom Rides" during the Civil Rights Movement in the 1960s.  Credit: Corey Sipkin

Robert Heller knew what awaited him when the train doors opened in Jackson, Mississippi.

It was spring 1961 in the heart of the Jim Crow South. Heller, who grew up in the nearly all white Nassau enclave of Rockville Centre, was with other "Freedom Riders" — nonviolent Black and white civil rights activists who arrived in Jackson by bus or train to test the nonenforcement of a United States Supreme Court ruling desegregating interstate public transportation.

The four-hour Illinois Central train ride from New Orleans to Jackson on May 30, 1961 — organized by the Congress of Racial Equality [CORE] — was largely uneventful for Heller, who is white, and his seven fellow passengers, four of whom were Black. But as the train doors swung open, a thought occurred to the idealistic young activist.

"We all knew that we would be arrested and put in jail," Heller, 78, said in an interview last week. "It was just a matter of [the police] not beating us up."

Members of the State Police and FBI slapped cuffs on the then-19-year-old Tulane University sophomore and other activists. Photographers snapped indelible images of the chaotic scene.

Once on the platform, Heller walked to the "coloreds only" water fountain and took a drink — a simple but then-audacious act meant to challenge the indignity of the racial status quo.

Heller and his cohorts were arrested, charged with breach of peace and taken to a local courthouse for a five-minute trial. Neither the guilty verdict nor the sentence — a $200 fine or 67 days in city jail — came as a surprise, Heller said.

He would serve 19 days, much of it on a hunger strike — a fact made easier by the terrible food, Heller said. The guards responded by removing the mattresses, forcing the inmates to sleep on metal bed frames.

But the Freedom Riders — including others with roots on Long Island — had made their point, establishing a small but crucial role in America's story of racial inequality that remains culturally significant nearly 60 years later.

Heller, of Manhattan, was raised in a family rich with political activism and union organizing, but often far removed from the village's relatively few Black residents.

"Growing up in Rockville Centre was just as segregated as being down south," he said. "Our high school may have had 3 or 4 Black people."

After joining the New Orleans chapter of CORE, Heller's activism deepened and put him in proximity with the heart of the civil rights movement. He once had tea in Atlanta with the Rev. Martin Luther King Jr.

Heller was arrested in New York City for handing out leaflets without a permit and jailed again months later while picketing in front of Macy's in New Orleans. The department store had refused to hire Black job applicants, Heller said. Rockville Centre may have been racially segregated in 1961, but the out-in-the-open racism of the South was different.

"Black people had to sit in the back of the street cars and the buses in New Orleans and sit upstairs in the balcony of the movie theaters," he said. "They couldn’t buy items in certain stores. They certainly couldn’t go the beaches and their ability to get jobs was very limited."

'The bus was burned'

The Freedom Rides were modeled after CORE's 1947 "Journey of Reconciliation," in which Black and white bus riders tested a Supreme Court decision — Irene Morgan v. Commonwealth of Virginia — one year earlier that ruled segregated bus seating was unconstitutional.

Irene Morgan Kirkaldy, a Black woman from Baltimore who lived out her later years in Roosevelt, was arrested in Virginia in 1944 when she refused to give up her seat on a crowded Greyhound bus to a white couple. Kirkaldy's defiance came 11 years before Rosa Parks' similar act in Montgomery, Alabama, helped spark the civil rights movement.

Kirkaldy's case, argued by Thurgood Marshall, then an NAACP lawyer and later a Supreme Court justice, was eventually struck down by the court, banning segregation in interstate transportation.

"I can't see how anybody in the same circumstances could do otherwise," Kirkaldy said in a 2000 interview with the Washington Post, explaining her refusal to give up her seat. "I didn't do anything wrong. I'd paid for my seat. I was sitting where I was supposed to."

Kirkaldy eventually moved to Roosevelt and operated a child care center in Queens. She died in 2007.

The 1961 Freedom Rides also tested a similar 1960 decision by the Supreme Court in Boynton v. Va. that found segregation of interstate transportation facilities, including bus terminals, was unconstitutional.

The original group of 13 Freedom Riders included the late John Lewis, who would become a civil rights icon and Georgia congressman.

"We were determined not to let any act of violence keep us from our goal," Lewis said in a 2009 interview. "We knew our lives could be threatened, but we had made up our minds not to turn back."

In one of the first acts of violence against them, Lewis and two other Freedom Riders were beaten by white protesters in Rock Hill, South Carolina as they attempted to enter a whites-only waiting room.

The violence continued in May 1961 as another group of Freedom Riders were brutally attacked in Birmingham, Alabama by an angry white mob, many brandishing metal pipes.

Among those who helped rescue the passengers was Robert Zellner, who would later spend decades teaching activism at the now-defunct Southampton College campus of Long Island University and was an influential figure in the Eastern Long Island Branch of the NAACP and the Southampton Town Anti-Bias Task Force.

"By the time we got there the Freedom Riders had been brutally attacked," Zellner recalled in a 2014 interview. "The bus was burned. The people were beaten. Cameras were laying in the street. Blood was covering the street."

The son and grandson of Ku Klux Klan leaders, Zellner, a student at Huntingdon College in Montgomery, Alabama in 1961, became the first white southerner to serve as field secretary for the Student Nonviolent Coordinating Committee.

His activism was not without consequences. He was beaten, and arrested 18 times, in seven states, with charges ranging from criminal anarchy in Baton Rouge, Louisiana to "inciting the Black population to acts of war and violence against the white population" in Danville, Virginia.

Efforts to reach Zellner at his home in Daphne, Alabama were not successful.

From minister to activist

In 1959, John Raines followed in his father's footsteps and became an ordained minister, serving for nearly three years at the Setauket United Methodist Church on Suffolk's East End.

But Raines, then in his late 20s, was drawn to social activism while performing graduate work in theology — the message of his Christian faith challenged by the nation's unjust treatment of African-Americans.

James Farmer, the head of CORE, asked Raines and four others to participate in a June 1961 Freedom Ride from St. Louis to Little Rock, Arkansas. The five riders, three of them Black, were confronted by an angry white mob in Little Rock and arrested.

Raines, who died in 2017, was taken before a white judge, who explained his predicament.

"[The judge] told John, 'I will find you guilty because if I don't, I won't be reelected,'" recalled his widow, Bonnie Raines, who lives in Philadelphia.

The group spent a night in jail, were instructed to pay a small fine and hustled out of town.

Bonnie Raines said her husband, who was raised in a progressive and affluent community in Minneapolis, had never felt so powerless.

"Instead of looking down from the white establishment, which was how he grew up, he was on the bottom and the power was to punish him," said Bonnie Raines, who met her future husband a few weeks after his arrest. "That was very eye-opening for John. … He characterized it as a second education."

A decade later, John and Bonnie Raines would secure a different place in the history of American social justice.

Parents of three young children at the time, the Raineses and six co-conspirators organized a brazen burglary of an FBI office in suburban, Philadelphia, swiping a cache of documents that showed the agency, then led by J. Edgar Hoover, had launched a sweeping intimidation and surveillance campaign against civil rights and anti-war activists.

The group, known as the Citizens Commission to Investigate the FBI, would distribute the stolen documents to several national newspapers, including The Washington Post, leading to oversight changes at federal law enforcement agencies.

The Raineses would reveal their role in the break-in decades later — long after the statute of limitations had expired — to Betty Medsger, the Washington Post journalist who first reported news of the stolen documents.

A lesson to the next generation

On the 50th anniversary of the Freedom Rides in 2011, racial integration on Long Island had improved but the remnants of racial discrimination remained.

Many wealthy neighborhoods on tree-lined manicured streets were still occupied by a majority of white families — a sharp contrast to schools in primarily minority neighborhoods that continued to struggle with poverty.

This dichotomy was particularly apparent in primarily white Garden City and predominantly minority Hempstead — two central Nassau communities that share a border but little else.

In June 2011, students at Alverta B. Gray Schultz Middle School in Hempstead studied the civil rights movement, from King and Rosa Parks to Brown v. The Board of Education and the story of Emmet Till, a 14-year-old who was kidnapped, beaten, shot and dumped into a river for whistling at a white girl while visiting Mississippi.

To commemorate the 50th anniversary of the Freedom Riders, 40 students engaged in their own journey to abolish segregation — marching one mile to the border of the two villages and then a second mile to a Garden City park.

Alan Singer, a Hofstra University professor of teaching, learning and technology, who led the march, said the Hempstead students were initially reluctant to participate.

"The kids said 'we can't go to Garden City. If we go to Garden City we will be stopped. The police will want to know what we're doing there,'" Singer said. "That was their experience if they wandered over the lines."

The students, adorned in T-shirts reading "Children's Crusade" and "End Long Island Apartheid" marched in 90-degree temperatures from Hempstead to the cobblestone sidewalks and giant oak trees of Garden City.

When they reached a stop sign at the Franklin Avenue border between the two communities, the students chanted: " 'The sign says stop but we're not stopping,' " Singer said. "And then they jumped across. It was a very dramatic experience for the kids."

The students finished their day eating a picnic lunch and taking pictures below a sign at Grove Street Park in Garden City that read "town residents and guests only."

The students, Singer said, received a small taste of the Freedom Riders' experience.

"We wanted the kids to have a sense of empowerment — that if they worked together in a responsible way they could challenge segregation barriers," he said. "That they could be activists in the same way as the people they had read about."