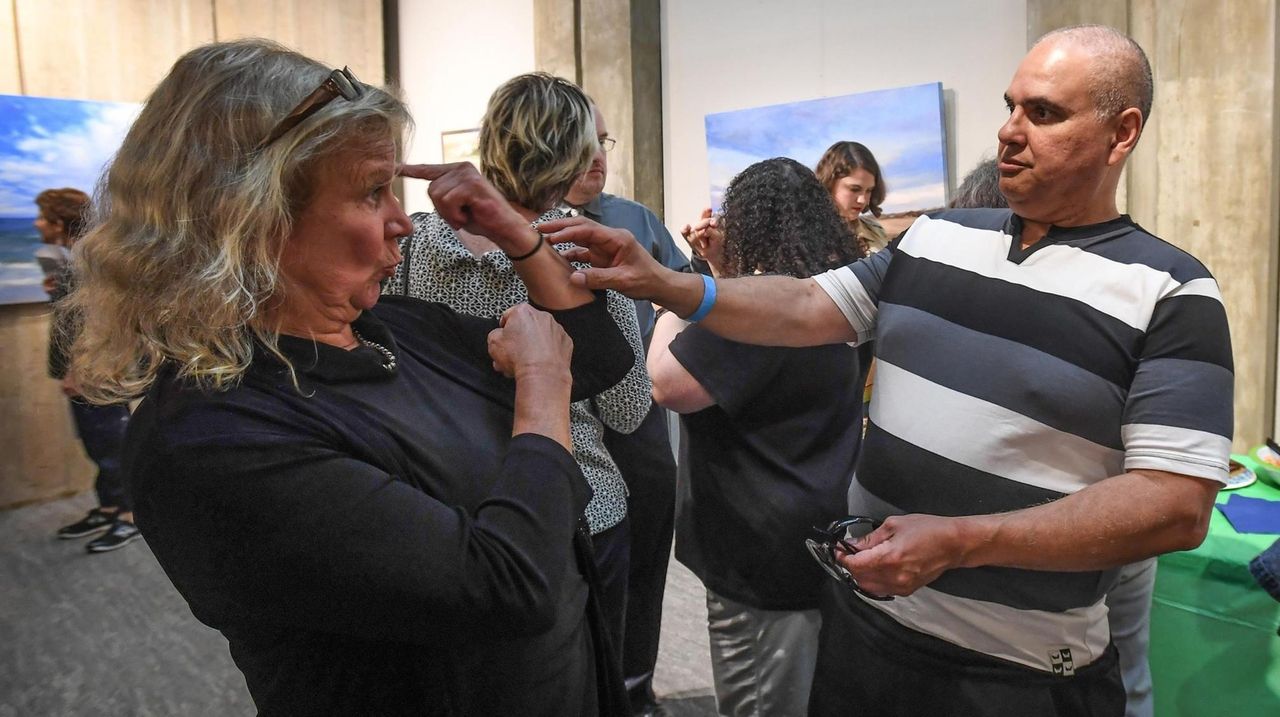 Robert Tarango, a deaf and blind actor from Long Island, who went to the Helen Keller National Center in Port Washington and still works there, is a pioneer: He has a leading role in the movie “Feeling Through,” and it’s believed he is the first deaf and blind person to play the lead in a film. Credit: Johnny Milano

At 55, Robert Tarango is what Hollywood calls an overnight success.

For years, he has worked as a cafeteria assistant at the Helen Keller National Center for Deaf-Blind Youths and Adults on Long Island. Today, he plays the lead in a new short film that is showing at a handful of venues across the country.

Tarango, of Selden, has been deaf since birth and has lost nearly all his sight over the past 30 years. With his performance, he becomes the first deaf-blind actor in a featured movie role.

Acting is something Tarango has wanted to do since he was a kid, when he danced in a school play and spent hours watching John Wayne movies.

"My dream is finally coming true," Tarango said through a sign language interpreter. "I still can't believe it's happening to me."

Now, he is not only an actor with a credit but an ambassador of sorts for the 2.4 million Americans who are both deaf and blind.

Tarango's heart, his sincerity, his humanity — they jump off the screen in his portrayal of Artie in "Feeling Through."

"I hope it really opens up people's perspective," he said of the film. "Don't be afraid of us. We're not bad people. We're not stupid."

Tarango was born without the ability to hear, but his vision was fine.

He has Usher syndrome, a rare, genetic disorder that causes deafness at birth and gradual loss of vision. The National Institutes of Health attributes about half of all deaf-blind cases to the condition.

Growing up in Phoenix, Tarango did pretty much the things that the other kids did.

He acted in the school play. He watched old movies on TV — he idolized John Wayne and Kirk Douglas. He played basketball, football and soccer. He learned how to drive.

Sight made him independent. And there were things that he just loved looking at, like the night sky.

"I was able to see the beautiful stars," he said. "I can't now, but I have my memories of them."

Tarango isn't sure when he started to lose his vision. His mom, Aurora Terronez, figures it was about 30 years ago, in his mid-20s: He would bump into the furniture if a room didn't have much light.

His field of vision narrowed to the point where he could see only through a small circle.

He had to give up driving. He couldn't play sports anymore.

Still, Tarango moved ahead. He went to a technical college. He thought about becoming an electrician.

By his 30s, Tarango was working the production line in a meatpacking plant. He found he couldn't see at all at night. He had to quit.

His mom felt his pain.

"It broke my heart," said Terronez, 70, who lives in Glendale, Arizona. "I got very depressed. I wanted to give him my eyes."

Independence Day 1995 is the day Tarango realized just how vulnerable he was.

Out on a walk, he was robbed and beaten by a group of young men. His mom believes they targeted her son because of his disabilities.

"They broke my jaw," he recalled. "I was screaming for help. I had bruises all over my body."

Tarango stopped going outside alone. And he knew that if he wanted to live on his own, he would have to learn how to get around, how to communicate differently.

There was a place where he could do that, the Helen Keller center in Port Washington. Established more than 50 years ago, the center, a division of Helen Keller Services, is named for a deaf-blind woman who went on to become a writer and an activist.

In 1996, Tarango boarded a flight for New York. On the plane, he thought about how much his life had changed. He was angry about losing so much of his sight, about gaining weight. He was eating too much — he realized food was a way to vent his frustration.

At the center, Tarango learned how to navigate stairs, get around a grocery store and the train station, how to get on a bus.

His foldable cane is some 56 inches long with a white ball at the end. It fits into a sleeve attached to his belt, much like a sword into a scabbard.

"My cane is my best friend," he said.

Tarango got a job in the center's cafeteria. For more than 20 years, he has been sweeping up, washing dishes and taking out the trash.

Tarango lives on his own in Selden, sharing an apartment with a roommate who is deaf. He gets to work on his own, too, taking the LIRR, a bus and finally a cab to get to the center.

"I'm happy," he said, tapping his heart with his open hand. "I wanted to work hard for what I have."

Doug Roland is a New Yorker who moved to Los Angeles to make movies. So far, he has directed a handful of short films, all about people who are forgotten or overlooked.

About a year ago, the 35-year-old filmmaker called the center, looking to cast a blind-deaf man for a film inspired by his own encounter with a deaf-blind man. He flew across the country to do interviews.

"I knew it was going to be Robert as soon as he walked in the room," Roland said. "He had a warmth and an openness."

Roland had seen the same qualities in the deaf-blind man he had met years before in Manhattan's East Village. The man carried a sign, asking for help to cross the street. Roland obliged; they communicated by Roland spelling words on the man's palm and the man writing down his responses.

The encounter changed Roland. He knew he had to tell the story. He called it "Feeling Through."

Filming over five November nights in Manhattan, Tarango was nervous at the start. Roland could see that his lead actor was too focused on pleasing him.

Roland pulled him aside.

"This is not about me," he told Tarango. "This is yours, not mine."

And playing a completely blind man stirred up Tarango's worst fear. Someday, he might lose what little sight he has left. He worries he might not be able to keep his job. Or that his friends might turn away.

"It was very emotional," he said. "This could possibly be my future."

In "Feeling Through," which runs about 18 minutes, Tarango's character, Artie, is heading home in the early hours of the morning. Like the deaf-blind man whom Roland met, he holds a sign asking for help to cross the street.

A homeless young man, Tereek, takes him to a bus stop. Tereek spells words on Artie's palm and Artie writes down his responses.

As they wait, Tereek becomes protective of Artie. He insists that the bus driver tell Artie when he reaches his stop. The driver grudgingly agrees. As the bus pulls away, Tereek watches from the street. His face shows his concern and caring.

The young man who plays Tereek is Steven Prescod, who lives in Brooklyn. He meshed with his co-star.

So far, "Feeling Through" has played at libraries, museums and theaters in Los Angeles; the Nashville area; Cary, North Carolina, which is midway between Chapel Hill and Raleigh; and Port Washington.

The screening at the Port Washington Library was packed. Tarango's mom had even come from Arizona to surprise her son on his overnight success.

Before the night was over, nearly two dozen filmgoers had asked Tarango for his autograph.

NY pols call for quick dredging of 'dangerously shallow' Jones Inlet
A community comes together to 'put food in the fridge that people will actually eat'
How much state aid could your school district get?
State Senate confirms Janno Lieber as MTA chairman
Barge off Long Beach surveys best route for wind-powered cable
Forecast: Bitter cold impacting much of nation to arrive on LI
Didn’t find what you were looking for?