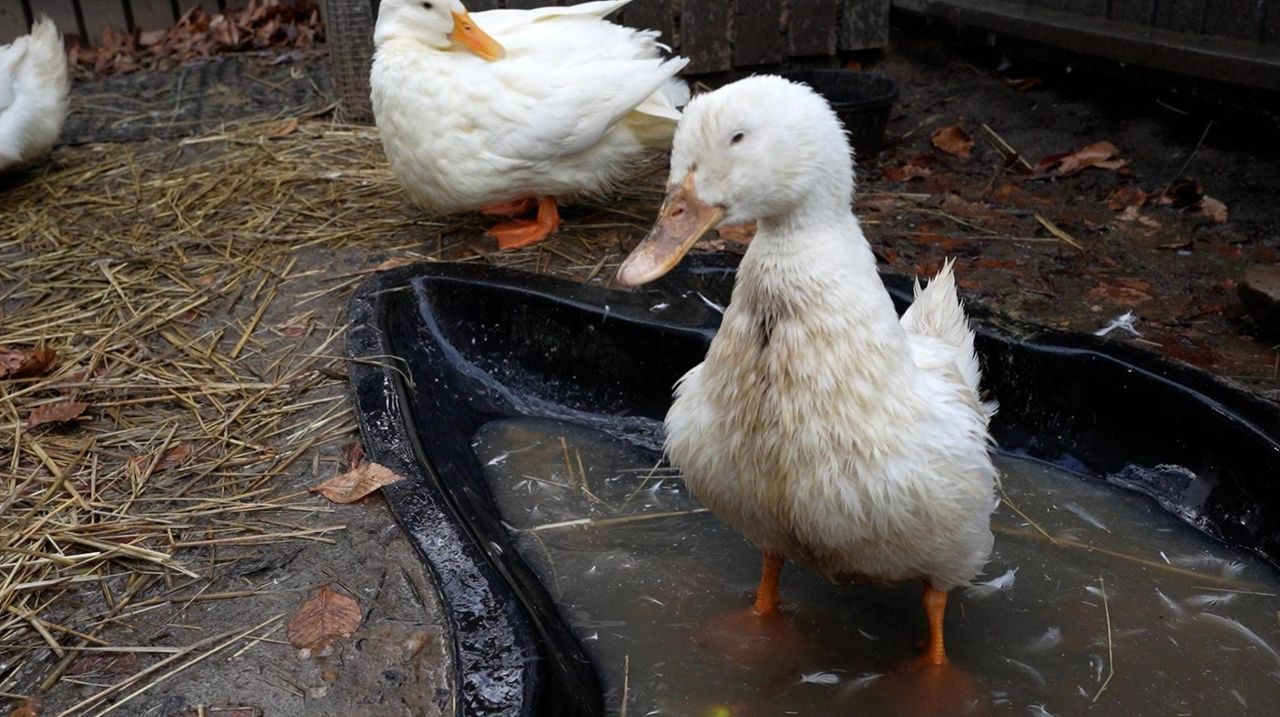 Chicken enthusiasts sometimes find their new - and in some cases unexpected - dawn wakeup call is just not compatible with suburban life, and they abandon their roosters. Activists discuss the impact. Credit: Newsday / Randee Daddona, Howard Simmons

Long Islanders cooped up in their homes during the pandemic led to an increase in backyard chicken ownership and, consequentially, an uptick in roosters that need to find new homes, animal rescue groups said.

There are no numbers on Long Island chicken owners, but local poultry retailers reported record sales in recent years, with thousands of people now belonging to online Long Island chicken groups. But the idyllic vision of keeping a backyard homestead sometimes does not mirror the reality of densely populated Long Island life — especially when neighbors, or owners, begin squawking.

Novice chicken keepers sometimes don’t realize they have males in their flock — which are noisier and often more aggressive than their female counterparts — until the birds start crowing at several months old.

Joanne Kenwood adopted what she thought were three hen chicks from an upstate farm in October 2020 and was looking forward to raising them on her Miller Place property. But six months later, she heard the first dreaded cock-a-doodle-doo. She rehomed the bird only to hear a second crow a week later. Kenwood adopted two replacement birds from a local farm, and with another stroke of bad luck realized she had brought home rooster number three.

"It [the crowing] was ridiculously loud and super early in the morning; at 4 a.m. it started," said Kenwood, who retired from her job at a home construction firm last year. "Yeah, that’s not going to work for me."

Many municipalities have some restrictions on backyard poultry raising, but Brookhaven and Huntington are the only Long Island towns to explicitly ban roosters. Kenwood said she understands why Brookhaven does not allow roosters and said she would have opted to rehome the birds even if it did.

Still, chicken enthusiasts in every town often find their new dawn wake-up call is just not compatible with suburban life. The roosters then need to find a new place to roost, which means rehoming, or worse, abandonment.

Frankie Floridia, president of the Port Jefferson Station-based rescue group Strong Island Animal Rescue League, said it took a month to find proper homes for four roosters that were dumped at Heritage Park in Mount Sinai in August 2020. He questioned why any retail operation in a place like Brookhaven would be allowed to sell roosters. Stores sometimes sell birds as "straight run," meaning the sex has not been identified.

"It’s totally unfair that these places are allowed to sell these chicks not knowing whether they’re male or female to a place where they’re going to have a death sentence," Floridia said.

Finding places on Long Island willing to accept roosters can be difficult, and local Facebook groups are filled with posts from people looking to rehome unwanted males. One group with more than 1,000 members is solely dedicated to that purpose.

A Long Island man dumped five roosters Dec. 13 at the nonprofit Animal Nation in Westchester County’s South Salem — and it was the fourth time he had done so in the past few years, according to the group’s president, Patrick Moore. The organization fields calls every day from people in New York City, New Jersey, on Long Island and beyond looking to home a rooster, Moore said. The demand is so high that he said people will lob birds over the organization’s fence when they have been told there is no room.

"The roosters that are being tossed over the fence, we just don’t have enough pens for," Moore said. "We had to invest in making a bachelor pad for our boys."

Interest in chicken keeping is stronger than ever.

Tractor Supply Co., a national chain that sells chicks, chicken-raising equipment and hobby farm supplies and has stores in Medford and Calverton, reported double-digit sales growth in every quarter since the pandemic began in March 2020. Representatives of Long Island Poultry, a poultry seller in Calverton, estimate the business grew tenfold in that time.

Animal advocates cited several factors why poultry owners may find themselves with a surprise rooster. The bird may be born out of a home or school hatching project, of which 50% will likely be male. They might be sent as an extra bird through a mail order hatchery to keep the rest of the brood warm — "bubble wrap for the other birds," said Moore of Animal Nation. Or, as in Kenwood’s case, their sex is incorrectly identified at birth and they are then purchased by chicken keepers who think they are getting hens.

Those who successfully adopt hen chicks might not realize what happens to their male counterparts.

Each year in the United States, 300 million male chicks are killed shortly after they are hatched, usually by gassing, grinding or suffocation, according to The Humane League, a Rockville, Maryland-based nonprofit that lobbies corporations on behalf of animals. United Egg Producers, an industry group, in 2016 committed to ending the practice and said this year it will do so when a method to identify sex before the eggs hatch is scalable.

John Di Leonardo, president of the nonprofit advocacy and rescue operation Long Island Orchestrating for Nature (LION), said the number of fowl rescues the organization responded to rose from about 1,000 in 2019 to 1,200 in 2020. The number stayed steady only because the Riverhead-based volunteer group has reached its capacity. His rescue work with LION became so demanding that Di Leonardo said he quit his longtime job with People for the Ethical Treatment of Animals in July.

Di Leonardo said relaxing rooster regulations in dense towns is not the answer. Instead, he recommends people who have the space and means to start "bachelor flocks" for roosters or "drake squads" of male ducks. The male birds seemingly do well when there are no females around to compete for their attention.

"If you remove the girls from the equation boys often get along very well," Di Leonardo said. "They’re usually just trying to show off for the ladies, just like us humans."

Of course, raising all males means going without the spoils of backyard chicken keeping. Di Leonardo, a vegan, said people should take in chickens for the pleasure of fowl keeping rather than to generate eggs.

"I think [the adage] ‘adopt, don’t shop’ applies to every species of animal," he said. "It really hasn’t caught up in the fowl keepers world."

The East End towns, where there is more open space and still many working farms, generally have more relaxed policies on chicken ownership.

Hempstead does not allow for any fowl keeping without exemption from the Board of Appeals.

Babylon Town is drafting a code amendment that would relax its setback restrictions on coops while also prohibiting roosters, according to town spokesman Kevin Bonner.

Islip does not ban roosters, but considered prohibiting them in 2014 and has an ordinance against the animals making noise before 7 a.m.