This year’s shofar blasts from the ram’s horn, sounded to herald the holiest days of the Hebrew calendar, are to be blown through Midway Jewish Center’s emergency exit.

Midway’s Rabbi Joel Levenson jests that the setup, meant to protect worshippers from coronavirus by dispersing the breath and saliva expelled from the shofar blower’s mouth, is like one of the nine gates of the Old City of Jerusalem: the Dung Gate.

"We kind of made a joke that the shofar sounder will be standing at the gate that leads to the dumpster," Levenson said, "but it’s the safe place for that person to be."

Reorienting the shofar is among the steps this synagogue and others are taking to bridge the Days of Awe, as the span between Rosh Hashanah and Yom Kippur is known, with the time of coronavirus. 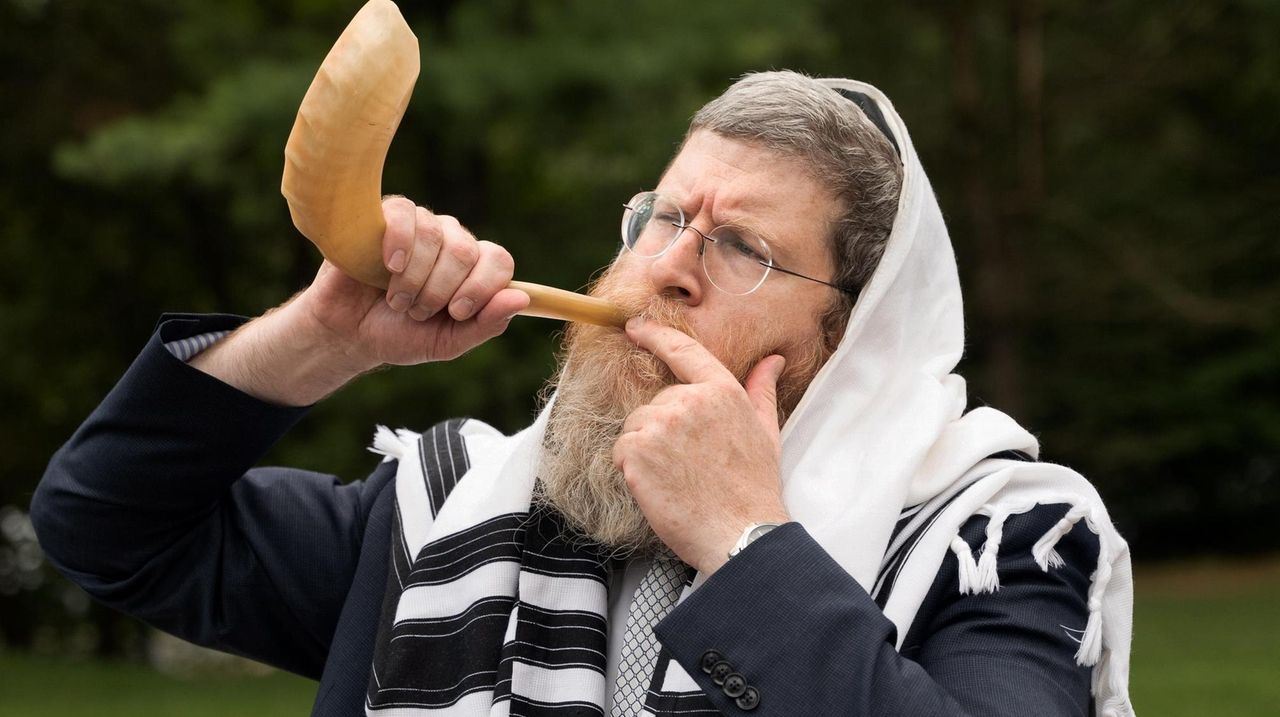 Shofar blowing should be done outdoors, but if indoors, a surgical mask should be placed over the shofar's wide end, according to state health department guidance issued Wednesday. The guidance also suggests limiting indoor capacity to 33%. Masking and social distancing of at least 12 feet between those who don't live together is recommended — both indoors and outdoors — if there is to be singing and chanting.

Across Long Island and the world, the millennia-old services for Rosh Hashanah, the Jewish New Year and anniversary of Adam and Eve’s creation, and Yom Kippur, the Day of Atonement, are being modified to stop the virus’ spread.

Services in the Reform movement — the least ritually strict of the three major Jewish denominations — are planned to be held almost exclusively online, with some congregations making recordings in advance, others streaming live and others doing a blend, said Levenson, who is also president of the Long Island Board of Rabbis.

Electronics on the holidays are strictly forbidden for Orthodox Jews, so those congregations are holding services only in person, albeit with social distance, modified rituals to limit contact between people, and a relocation outdoors for some.

The Conservative movement is taking the middle ground, with a mix of livestream or in-person observance or both, said Levenson, whose own congregation is hosting two simultaneous services with two rabbis — one outdoors and one indoors, both socially distant — with a livestream of the indoor. There will be three successive outdoor services to accommodate all those who want to attend, he said.

Holidays like Rosh Hashanah and Yom Kippur generate the highest synagogue attendance of the year, with at least 35% of Jewish adults attending, compared with about 25% attending at least once or twice a month, according to a 2013 Pew Research Center survey.

There are about 100,000 total in Nassau and Suffolk who are adherents of Judaism, including about 27,500 who are Conservative, 44,800 who are Orthodox, and 26,000 who are Reform, according to a 2010 analysis from the Association of Religion Data Archives, which counts adult members of congregations and their children, as well as others who regularly attend services.

For the first time in her life, Stephanie Honig said, she won’t be attending holiday services in person — a tradition she began with her mom and dad and brothers growing up in Stony Brook and worshipping at North Shore Jewish Center in Port Jefferson Station.

"I have never missed an in-person High Holiday service my entire life," said Honig, 41, a counselor at Mineola High School and one of Levenson’s congregants, who lives in Syosset and began changing her family’s Jewish traditions for the coronavirus pandemic in the spring by holding an online seder for Passover.

Now, buffeted by the pandemic, Honig, her husband, and their four children, ages 6 to 14, are planning to watch Midway’s livestream and hear the shofar live at one of the five or six local parks where Midway is planning to deploy a "Shofar Squad" so those who can’t or won’t attend services in person can still fulfill the mitzvah, or commandment, of hearing the shofar blast live, during the pandemic.

"We’re just making the best of it and finding the traditions that we can keep, that we’ve always done year after year — making lemonade out of lemons, or applesauce out of apples," Honig said in a reference to the Rosh Hashanah tradition of dipping apples in honey.

At Midway, which is in Syosset and Conservative, attendance is usually about 1,600 over the High Holidays, Levenson said. This year, he said, it’s expected to be half that in person. Worshippers who aren’t attending in person can borrow a High Holiday prayer book, known as a mahzor, from the synagogue office or download a digital copy.

Rabbi Mendy Heber, who runs the Chabad of Brookville, part of the global Hasidic outreach group that draws Jews of all levels of observance, is moving services outdoors, under a canopy, with social distance to space worshippers who don’t live together along with tweaking rituals that have characterized Jewish worship for thousands of years.

No kissing of the Torah with the tassel of a prayer shawl — as is tradition such as before and after reading a portion, as well as by congregants during a processional.

"They can look at it and, from afar, blow it a kiss," Heber said.

The blessings, he said, will be printed on giant cue cards to be recited at a distance from the Torah reader, who will step away from the reading table before a person going up to be honored recites the blessings.

As at Midway, the shofar is being blown away from the congregation, he said: "it’ll be loud enough for the sound to be heard, but if anything comes out of it, it will not be angled at anybody."

In Mineola, the Chabad Rabbi Anchelle Perl is presiding over back-to-back services — indoors only, because his synagogue, on Willis Avenue, has no space for outdoor worship — for the two days of Rosh Hashanah.

The first service of Rosh Hashanah morning, he said, will include all the prayers but be recited at a quickened pace, for four hours, and another service abridged, for two hours, with only prayer highlights. It’s usually five hours. In a break with past years, where no reservations were required, limited capacity means RSVPing this year.

"That bothers me to no end, but that’s the reality. That’s a very big change for me, not to welcome 400 or 500," he said, with attendance expected this year to be half that or less.

And as at Midway, for those who aren’t attending but still want to hear the shofar, there will be a sounding, at the southwest corner of Mineola Memorial Park Sunday at 4:30 p.m. by Perl’s son, Dovid, who is also a rabbi.

At the North Fork Reform Synagogue of Cutchogue, the officiating rabbi and cantor will be alone at Christ Church Riverdale in the Bronx, and the service will livestreamed to the East End congregation, said Kay Freeman of Riverhead, vice president and treasurer of North Fork Reform, which ordinarily rents space from Cutchogue Presbyterian to hold in-person services but hasn’t had any since March.

"We decided to have all of the holidays, Rosh Hashanah and Yom Kippur, via Zoom, and our cantor will be singing, and our rabbi will be doing what she does, and we’ll all be in our homes being safe," Freeman said.

In any other year, the synagogue members rotate who opens their homes for the holidays to welcome the rabbi and cantor, who both live in New York City, but, "there’s no way we could have them come to our homes because of all the different restrictions" this year, Freeman said.

The Yizkor remembrance service on Yom Kippur, held to honor a parent, child, sibling or spouse, is being done online too, with names of the deceased registered ahead of time and recited on the livestream, Freeman said.

Heber, the Brookville Chabad rabbi, said he hopes the service this year — 5781 in the lunar calendar Judaism uses — "will bring stability or familiarity and routine — as much, of course, as is possible with the health restrictions in mind."

Clarification: At least 35% of Jewish adults attend synagogue during holidays like Rosh Hashanah and Yom Kippur, according to a 2013 Pew Research Center Study. An earlier version of this story referred imprecisely to this statistic.