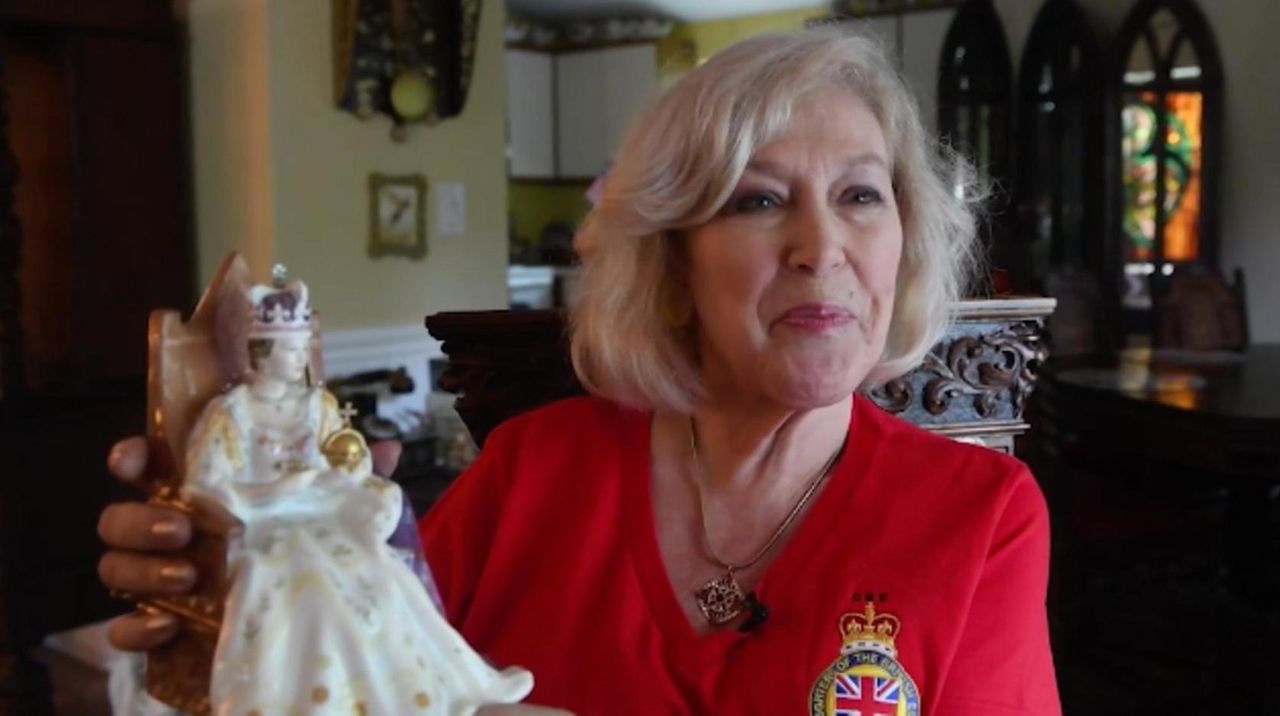 Victoria Crosby of Locust Valley hasn’t lived in Britain for years, but she is 100 percent into Saturday’s royal wedding of Prince Harry to American actress Meghan Markle. For Crosby, who is president of the Long Island chapter of the Daughters of the British Empire and spoke Thursday from her home, the fascination with the royals goes deep. Credit: Newsday / J. Conrad Williams Jr.

Victoria Crosby hasn’t lived in Britain for decades, but she couldn’t be more excited about Saturday’s royal wedding of Prince Harry to American actress Meghan Markle.

Since the couple announced their engagement in November, the Locust Valley woman has been combing the internet, scanning TV reports and talking to friends about the bride’s dress, the flowers, the guest list, the wedding cake, the music.

Crosby is one of those Long Islanders wild about Harry and Meghan, and she’s hardly keeping a stiff upper lip about it.

“My British connection is strong,” said Crosby, who was born and raised in England. The wedding is “very positive, very happy. It’s a break from all the bad news.”

Britain's royal wedding: What we know

Royal family watchers will be waking before dawn to watch the festivities. They are planning tea parties to celebrate the spectacle of pageantry, tradition and love of country. They will be donning their “fascinators,” headpieces often decorated with feathers, flowers and beads.

They are a club.

Crosby is president of the Long Island chapter of the Daughters of the British Empire. But its members are more than just fans of the royals. The wedding speaks to the heritage of Britain as well as their own stories.

Crosby, who holds dual citizenship, has a grand collection of British memorabilia that includes mugs, statues and an autograph of Queen Victoria.

She will proudly fly the British flag outside her home Saturday. And when the organ music rises inside St. George’s Chapel, she will be transported back to the hymns she loved as a girl.

What would the royal wedding look like on LI?

Crosby embraces Markle, who is biracial and divorced — unusual traits, considering the history of the royal family. The actress just wrapped up her final season of the TV legal drama “Suits.”

Crosby likes the so-called commoner. She sees the marriage as a reboot of the Cinderella fairy tale, starring an American.

“It brings another dimension to the royal family,” Crosby said. “I think she’ll do fine.”

Barbara Miller of Port Washington, another British native, is “terribly excited” about the nuptials.

She is recording the ceremony on two TV channels, to make sure she catches the best coverage. At noon Saturday, she’s having friends to watch the hoopla, sip tea and nibble on such British delicacies such as a Scotch egg, a hard-boiled egg enclosed in sausage, rolled in breadcrumbs and fried.

“When you grow up in England, the royal family is the royal family,” said Miller, 76. “The pageantry of a royal wedding is wonderful. The British, they know how to do it.”

Miller has traveled to Britain for two royal weddings — Prince Charles to Diana Spencer and their son, Prince William, to Catherine Middleton. She was in the crowd of thousands outside.

She remembers how the world watched Princess Diana’s funeral in 1997, including the scene of her two young sons walking behind the carriage carrying her casket.

“There’s a special feeling for them,” Miller said of William and Harry.

On Thursday, Janet Cooke was baking lemon-drizzle cakes in anticipation of waking at 3 a.m. Saturday to watch the buildup to the wedding, which airs at 7 a.m.

Cooke is also a member of the Long Island chapter of the Daughters of the British Empire, called the Westminster Abbey chapter. At the club’s next meeting May 24, the women plan to celebrate the wedding in their British finery, including their fascinators.

“I have four to choose from,” Cooke said.

Forecast: Snow is falling on Long Island
Barge off Long Beach surveys best route for wind-powered cable
Survey says: Omicron delays employers' back-to-office plans
On the front lines of omicron: It 'hit us like a tidal wave.'
Seniors Calendar: Events from Jan. 23 to Jan. 30
A community comes together to 'put food in the fridge that people will actually eat'
Didn’t find what you were looking for?