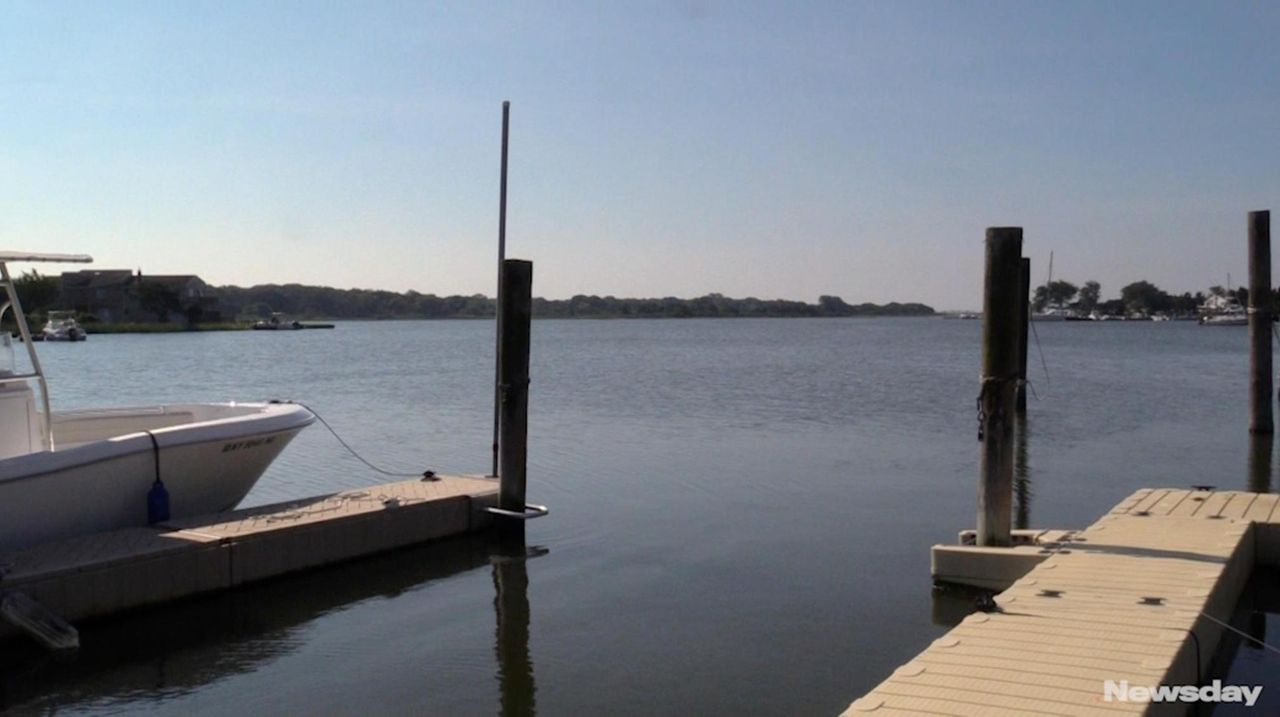 On Thursday, Stony Brook University professor Christopher Gobler explained what is happening in the waters off Long Island due to the rust tide in Southampton. Gobler says this deadly tide is being caused by two things: excessive nitrogen and high temperatures. Credit: James Carbone

Fueled by nitrogen-rich warm waters, rust tide algae are suffocating fish and shellfish as they command evermore territory in the Great South Bay, the Long Island Sound and the Peconic Bay.

"Geographically, this is probably the most widespread I've ever seen it," said Christopher Gobler, a professor at Stony Brook University's School of Marine and Atmospheric Sciences, who has shared his data with Suffolk County and the state Department of Environmental Conservation.

Though rust tide algae have bloomed every year on the East End since 2006, he said, this summer is the second time in the past three years that it has spread into the waters off the North Shore.

Rust tide can kill shellfish by coating them and clog the gills of any fish that cannot swim away from it, experts said. The algae are not harmful to humans, according to Suffolk health officials.

Earlier this month it killed "tens of thousands of caged oysters and fish" in Old Fort Pond in Southampton, Gobler said. A separate rust tide spread across the Great South Bay between Sayville and Bellport, and in the past week it appeared in Port Jefferson Harbor, Conscience Bay, Three Mile Harbor in East Hampton and in "the open waters of Long Island Sound," he said.

Technically, rust tide is a mixotroph, which means it can make its own food through photosynthesis, or feed on other algae or nitrogen from septic systems and farms, said Patricia Glibert, a professor with the University of Maryland's Center for Environmental Science.

This dual ability is why she said they have been likened to the Venus flytrap plant, which relies on photosynthesis and the insects it consumes. It also helps explain why rust tide algae are so successful.

Nitrogen pollution has long been known as the primary cause of rust tide and its cousins red tide, brown tide and blue-green algae. Scientists have said the algae are a worldwide problem that, for example, affect fish farms in Asia.

In the United States, Florida is enduring red tide and blue-green blooms — both of which can harm people in addition to all manner of marine life — on the state's east and west coasts.

“It is catastrophic," Glibert said.  "We worry about the human health concerns. We also have to be aware of the economic costs.”

Florida's red tide led Gov. Rick Scott to declare a state of emergency in mid-August. Neither residents nor tourists wish to visit dock- or seaside restaurants or beaches, where dead fish, manatees and whale sharks have washed up — and some lifeguards wear gas masks.

"This is a challenge a lot of us are facing as water warms," said Michael Wetz, chair, Texas A&M University Corpus Christi Harte Research Institute for Gulf of Mexico Studies’ ecosystem studies. "It just makes a lot of our waters more susceptible."

Said Gobler: “Compared to the 20th century, summer water temperatures today are significantly warmer and it's been a warmer than usual summer. When we have extended heat as we have seen this summer, intense rust tides often follow.”

Scientists say curbing the carbon dioxide causing climate change requires action from all levels of government and enterprises. So does removing nitrogen pollution, they say, though new wastewater treatment systems can be costly.

"One thing we've been promoting here is reducing the nutrients," Wentz said. "That's basically it; dealing with the nutrients to try and minimize the impact."

“People are starting to realize, you either spend more to fix the wastewater systems or septic systems, or in the long run, costs may add up more.”

Most homes and businesses in the counties around New York City, including Nassau, have sewer systems. Nearly 75 percent of Suffolk homes, though, do not. Officials estimate Suffolk has some 252,000 cesspools — holding tanks that eventually leech untreated waste directly into the ground. Another 108,000 properties have traditional septic systems, which offer better overall treatment but do little to reduce nitrogen.

Suffolk hopes to entice homeowners to upgrade to advanced systems and is working on a limited number of sewer connections.

Nassau’s Bay Park Sewage Treatment Plant, undergoing a multiyear upgrade, has been releasing 52 million gallons of treated sewage daily into Reynolds Channel, which feeds into the Great South Bay to the east.

New York State, the DEC said, “is committed to addressing and improving water quality throughout Long Island." The agency cited the $2.5 billion Clean Water Infrastructure Act of 2017, and the ‎$300 million Environmental Protection Fund, among other measures, including land acquisition and “critically important investments in Long Island septic system replacements.“

Some locations such as Florida’s Tampa Bay, have made considerable progress in curbing nitrogen, scientists said, which has brought back eel grass, improved water quality and made it much more resilient.

Developers, localities, farmers, industries and the like devised more than 400 solutions, from strict zoning laws to requiring wastewater treatment plants to either use advanced systems or re-use 100-percent of their water for irrigation, according to the Tampa Bay Estuary Program.

So far, there are no ways of eradicating algae blooms except in small bodies of water.

One method is spraying clay, which binds with the algae, causing them to sink to the bottom, Glibert said.

“It is a very effective measure that’s used throughout Asia to control these algae blooms, and particularly when blooms start to come into a range where it might harm an aquaculture area,” she said.

However, this method can kill the sea grass and the tiny crustaceans and other creatures that live on the bottom, which larger fish eat.

After cooler weather kills a bloom, small ponds can be aerated with fountains to raise the amount of dissolved oxygen. That keeps the bacteria that feed on the dead algae from turning the water into a “dead zone.” Said Glibert: “That can be effective for a local pond, but it’s certainly not practical to put those sorts of aeration treatments up and down the west coast of Florida.”

CORRECTION: Michael Wetz's name was incorrectly spelled in previous versions of this story.

Long Island’s algae blooms come in several varieties that pose varying degrees of threats to the environment and the health of sea creatures and people.