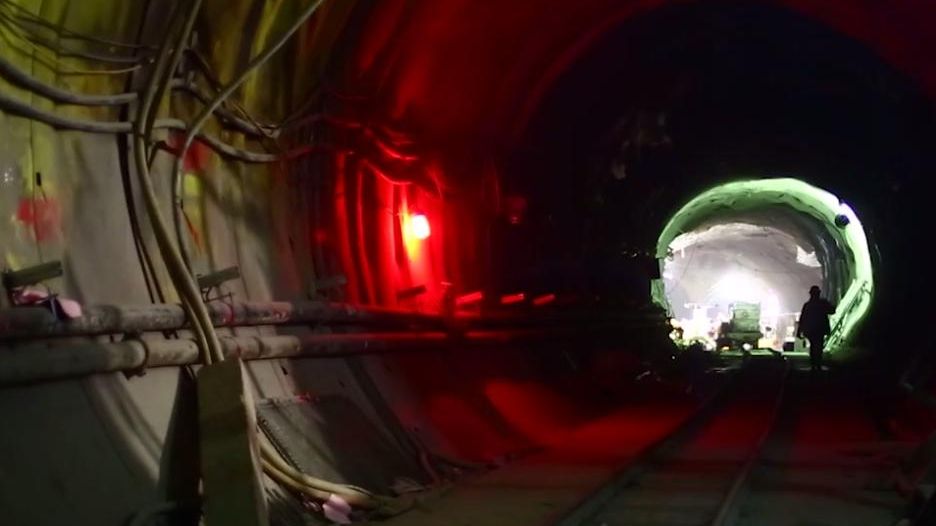 Amtrak repairs to its Sandy-damaged East River tunnels will force the LIRR to operate without one of the four tubes to and from Penn Station for two years, Amtrak officials said on Wednesday, Oct. 1, 2014. Amtrak says the work, which won't begin for more than a year, is needed to address continuing corrosion from saltwater left behind by Sandy flooding. (File footage)

Amtrak repairs to its superstorm Sandy-damaged East River tunnels will force the LIRR to use one fewer tube to and from Penn Station for two years, officials said Wednesday.

The project is expected to cost at least $328 million and shut down two tubes, each for one year at a time. The work, which won't begin for more than a year, will cause "an appreciable reduction in capacity" at Penn Station during rush hours, Amtrak vice president Stephen Gardner said.

The century-old East River tunnels consist of four tubes primarily used by the Long Island Rail Road. If a problem arose in a second tube while one was under repair, the LIRR's options would be limited; however, trains could run in the remaining tubes, also used by Amtrak and New Jersey Transit.

Amtrak's announcement Wednesday follows the recommendations of HTNB, a Kansas City, Missouri, consulting firm that inspected the tunnels, owned and maintained by Amtrak. The consultant's report found that, even two years after Sandy inundated two of the four passageways, corrosive salts left by floodwaters are "compromising and will continue to compromise the integrity and the strength of the track and rails."

Post-Sandy tunnel repairs to limit LIRR capacity Amtrak repairs to its Sandy-damaged East River tunnels will force the LIRR to operate without one of the four tubes to and from Penn Station for two years, Amtrak officials said on Wednesday, Oct. 1, 2014. Amtrak says the work, which won't begin for more than a year, is needed to address continuing corrosion from saltwater left behind by Sandy flooding. (File footage)

Amtrak officials emphasized that the report found the tunnels to be safe and structurally sound. But if left unaddressed, the continuing corrosion from the saltwater could impact service reliability.

"The impact of that finds its way into people's daily lives," Amtrak chairman Tony Coscia said. "In order to adopt the recommendations of this report . . . we're going to see an increasing number of times that we're going to have to take trains out of service in order to be able to go into the tunnels and effect the necessary repair."

LIRR spokesman Aaron Donovan said the agency shares Amtrak's concerns about keeping "a piece of infrastructure we rely on heavily" safe and reliable.

"We also are concerned about anything that could reduce our ability to provide rush-hour service to Penn Station," Donovan said. "We're reviewing the engineers' recommendations that Amtrak has accepted, and will be in close communication with them about next steps."

Other tunnel repair and maintenance efforts require only temporary track outages, but Amtrak officials said that shutting down the tunnels altogether is necessary because of the size and scope of the work recommended by HTNB -- including completely replacing cracked and crumbling concrete bench walls adjacent to tracks.

"It's an impossibility to do that and return tracks to service," said Gardener, adding that Amtrak will work with partners, including the LIRR, "to find ways to minimize the impact" on customers.

Amtrak officials did not have a date for when the work would begin, but Gardner estimated it would take more than a year to design the project and coordinate with the LIRR and NJ Transit, which also uses the tunnels, on service plans.

LIRR Commuter Council chairman Mark Epstein said that while he recognizes the need for Amtrak to address the long-term damage caused by Sandy, the agency needs to answer several questions important to LIRR customers, including specifically when the work will be done, what the impact will be on service, and whether Amtrak will use LIRR crews to expedite the project. Under an agreement between the two agencies, Amtrak employees conduct all the repair and maintenance work inside the tunnels, even though the LIRR often pays for it.

"Riders want nothing to get in the way of doing this job as effectively, rapidly, safely and efficiently as possible, but Amtrak must ensure that the LIRR can maintain an acceptable level of service during the period of repairs," Epstein said in a statement. "We call upon Amtrak to be open and honest with riders and to take advantage of all available resources to rebuild these tunnels with the smallest possible impact on LIRR users."

Amtrak said it expects the repair of the two tunnels to largely be funded through insurance, but said it will tap all other resources, including federal, state and Metropolitan Transportation Authority funds, if necessary.

Amtrak had already begun in 2011 to replace the tracks inside the four tunnels after complaints from MTA officials about deteriorating conditions inside the passageways affecting LIRR service. That work required one tunnel being out of service on weekends through 2015. But Gardner confirmed Wednesday that the damage caused by Sandy set back much of the progress.

Gardner said Amtrak did not know what, if any, effect the new work would have on the MTA's ongoing East Side Access project to link the LIRR to Grand Central Terminal.

MTA officials have said that competing Amtrak work at the busy Harold Interlocking in Queens is the primary contributor to delays on the project, which is now pegged for completion in 2022.

A similar effort to make repairs inside the Hudson River Tunnel, which serves Amtrak and NJTransit, will cost an additional $361 million. But Amtrak said that work can't fully get under way until a new tunnel is constructed as part of its Gateway project. That could take more than 10 years, Amtrak officials said.

An Amtrak consultant found that corrosive salts from superstorm Sandy flooding continues to cause damage inside the East River tunnels, primarily used by the LIRR.

The cost of the work in the East River tunnels will be at least $328 million, which Amtrak hopes to pay through insurance.

Amtrak says the repairs will require taking two of the four tubes of the tunnels out of service, one at a time and each for one year. That will limit the LIRR's capacity at Penn during rush hours.

A similar project inside the Hudson River tunnels won't fully get under way for 10 years or more, as Amtrak works on building a new tunnel there.

Take our LIRR quiz The Long Island Rail Road is the busiest commuter railroad in North America. How well do you really know the LIRR's rich history? Take our quiz and let's find out.