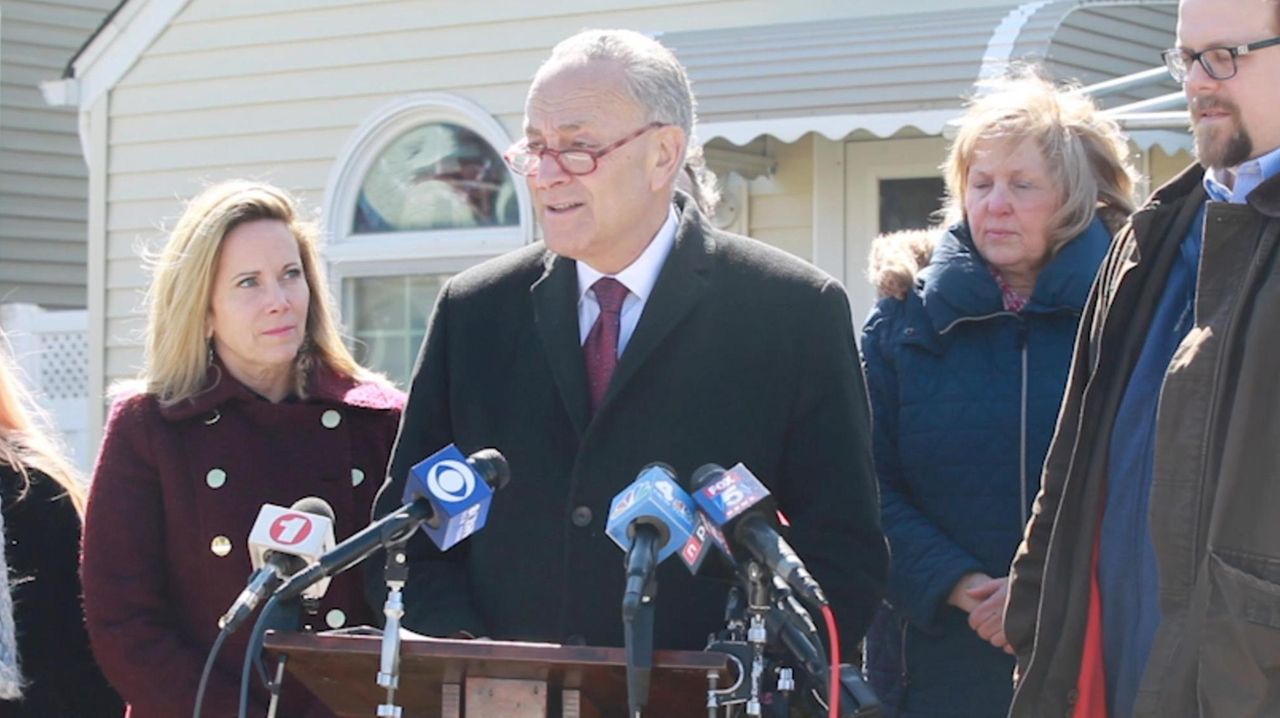 FEMA announced last month that it would use private sector data to more accurately determine a homeowner's risk of experiencing a flood. The system, known as "Risk Rating 2.0," would calculate premiums based on a number of "logical rating variables," including the distance from a home to the coast or water source, different types of potential flooding and the cost to rebuild a home. Under the existing system, all homes located in a FEMA-designated "flood plain" pay the same insurance premium.

FEMA officials say the new system, which would go into effect nationwide on Oct. 1, 2020, would be straightforward, transparent and fairer to homeowners living on the edge of flood zones.

But on Monday, Schumer called the proposed changes "callous" and said they put a "bull's-eye" on middle-class Long Island homeowners, many still recovering from superstorm Sandy more than six years ago. The New York Democratic lawmaker called on FEMA to immediately halt its plan until additional information is provided to Congress and the public.

"If flood insurance becomes so expensive that people can't afford it, then their dreams will be washed away," Schumer said at a news conference in Long Beach, which suffered massive flooding during Sandy.

Schumer said few details are publicly available about the Risk Rating 2.0 initiative and FEMA has posted only 221 words about the changes on its website.

FEMA, he said, must provide details on how rates will be calculated; who will be gathering and measuring the data; the systematic implications of insurance rates doubling and tripling for some homeowners and measures to provide oversight of insurance companies and the lawyers who defend their claims.

"We want reforms but we want them good for homeowners and not insurance companies; not for lawyers or bureaucrats," Schumer said. "We want a flood insurance program that provides homeowners with flood protection at a stable and fair cost."

In a statement, FEMA said it has “been working to ensure members of Congress understand this process and we look forward to our continued partnership in this effort so everyone has a full understanding of the Risk Rating 2.0 transformation."

"This assures that the people in this region, which already have the highest cost of living in the country, will suffer a disparity," said Agostisi, who called on FEMA to consider a policy holder's income into the insurance cost.

The National Flood Insurance Program covers about five million policyholders nationwide, down about 10 percent from its peak in 2009, at a cost to policyholders of nearly $1.3 billion per month, records show.

The independent Government Accountability Office has said the program's claims often outpace premiums, leaving it $20.5 billion in debt as of September 2018, despite Congress canceling $16 billion in debt in October 2017.

"Without reforms, the financial condition of NFIP could continue to worsen," the GAO reported last month.

In December 2013, there were nearly 92,000 NFIP policies in place on Long Island and, in the Northeast, roughly 144,000 residents filed claims after Sandy.

But homeowners criticized the program, arguing that FEMA often failed to completely pay Sandy-related claims, causing many to drop out of the program.

"South Shore residents are already paying thousands of dollars yearly for flood insurance, only to be shortchanged when filing claims for Sandy," said Michele Insinga, executive director of Adopt-A-House, a nonprofit formed to help residents impacted by the 2012 storm.

Raymond Flammer, who lives on West Fulton Street in Long Beach, equated the flood insurance hike to a "backdoor tax" on overburdened homeowners.