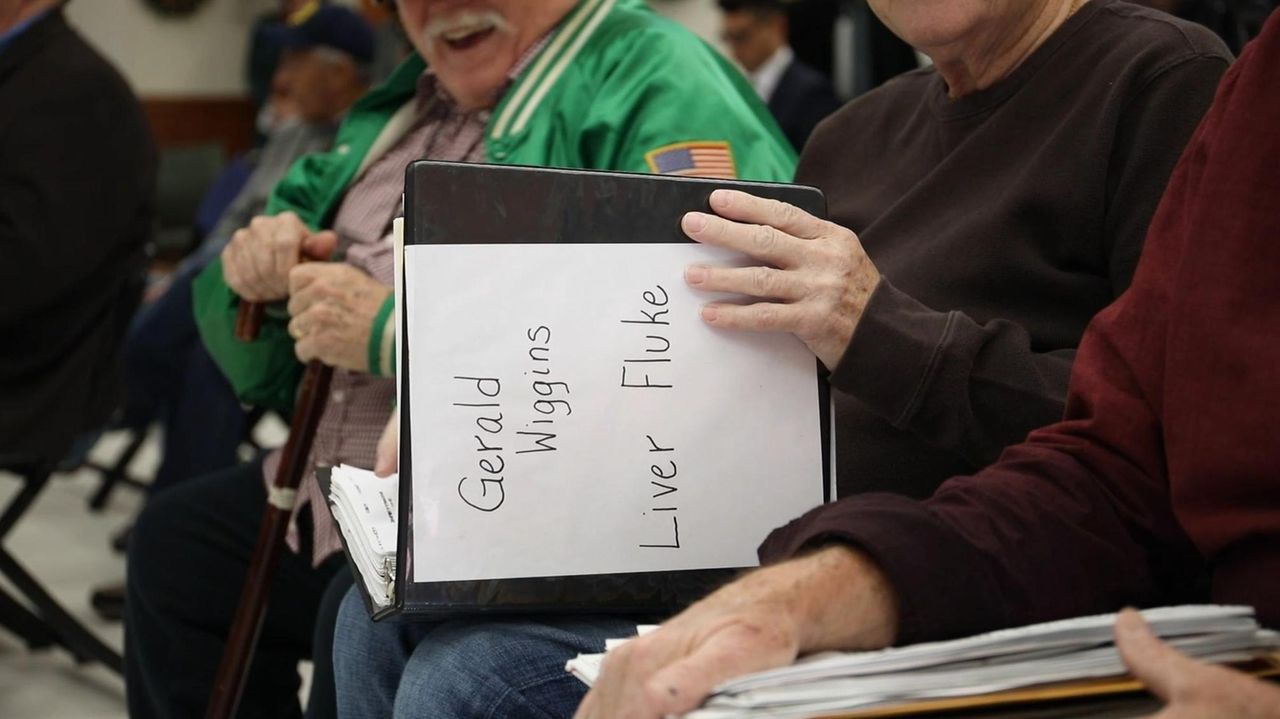 Sen. Chuck Schumer asked on Friday at the Long Island State Veterans Home in Stony Brook that the Department of Veterans Affairs include data in their new study to investigate the affects of toxins on veterans to include the affects of liver fluke. Credit: Morgan Campbell

Standing alongside Long Island veterans with cancer, Sen. Chuck Schumer demanded Friday that their specific cancer be included in an upcoming Department of Veterans Affairs study into toxic and environmental exposures during military service.

The three veterans, who served in Vietnam, said they were exposed to a waterborne parasite common in that area called liver fluke and later developed cancer of the bile duct.

Schumer (D-N.Y.) noted that the VA is preparing to launch a major study on the potential link between toxic and environmental exposures and the development of cancer. The VA has yet to decide on the focus and scope of the study, he said, and Schumer wants to make sure the agency delves into this cancer, called cholangiocarcinoma.

"We're going to fight until we see those who were exposed to liver fluke in Vietnam and other places get their due from the veterans administration," Schumer said during a news conference at the Long Island State Veterans Home in Stony Brook.

The senator pointed to a small study in 2017 by the Northport VA that determined a link between exposure to the liver fluke by those serving during the Vietnam War, and the development of the rare bile-duct cancer. Of the 50 area Vietnam combat veterans tested, one in four had once harbored infestations of the liver fluke parasite.

A VA spokeswoman said Friday that the Northport study would not be used in any future VA studies.

"The lab test used in the Northport VA Medical Center pilot study has inherent flaws with likely sensitivity to parasitic worms other than the liver fluke, no usage of a control group, and it is unclear how many who tested positive were actually exposed," said spokeswoman Christina Mandreucci in an email.

Schumer, for his part, said the Long Island study has much value and the data could help with a larger study.

"An association might exist between bile duct cancer and parasites known to live in the Vietnam region during the Vietnam War, and maybe the Long Island data propels the national data," Schumer said.

Schumer said numerous Vietnam vets across the country have developed the bile-duct cancer due to the parasite, which remains dormant for decades. Once symptoms occur, it is often too late, he said.

Vietnam vet Gerry Wiggins, 71, of Port Jefferson Station, participated in the Northport VA study. Two years ago, he said he had two cysts removed from his bile duct.

"I have a time bomb in me ready to go off," Wiggins said. "We put our hands up 50 years ago to fight for this country … but 50 years later I'm told I have a disease they can do nothing for."

The senator was also joined by the family of Jerry Chiano, a Vietnam veteran from Valley Stream who died of the bile duct cancer in 2017. He had battled to raise awareness about the cancer and the waterborne parasite.

His daughter, Genine Chiano of Lindenhurst, said the family is carrying on their father's advocacy for this issue.

"In my dad's honor, we have all worked very hard living the legacy, living his passion for advocacy for this particular disease," said Chiano, 48.