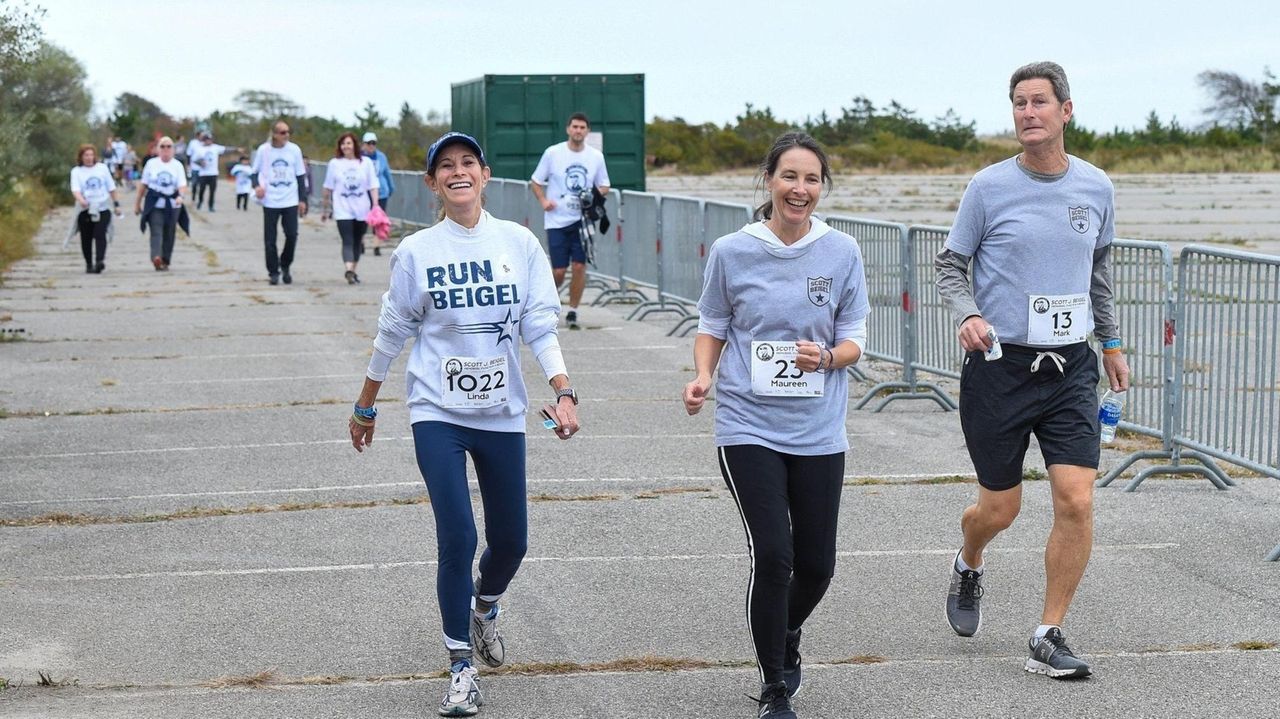 Hundreds of people ran, jogged and walked the 5k course in Heckscher State Park Sunday to raise funds for the Scott J. Beigel Memorial Fund, which sends kids to summer camp. Beigel was the Marjory Stoneman Douglas High School geography teacher, originally from Long Island, who saved dozens of lives but lost his own during the mass shooting in Parkland, Fla.  Credit: James Carbone

The first runner across the finish line at the Run 4 Beigel on Sunday was still catching his breath as he spoke about Scott Beigel, the Marjory Stoneman Douglas High School geography teacher who saved dozens of lives but lost his own during the mass shooting in Parkland, Fla.

Glen Bornhoft of Holbrook said Beigel, a cross-country coach and Dix Hills native, was a hero long before he led students to safety before he and 16 other people lost their lives in the February 2018 attack.

“All teachers, all people who work with kids are heroes,” Bornhoft said. “Scott was a superhero.”

The event, held two days before what would have been Beigel’s 37th birthday, was organized by the Scott J. Beigel Memorial Fund. The fund was established by Beigel’s parents, Michael Schulman and Linda Beigel Schulman of Dix Hills, who have lobbied for tougher gun laws in New York State and beyond. Linda Beigel Schulman praised the Parkland teenagers and said she won’t stop fighting until politicians deliver more than thoughts and prayers after deadly shootings.

“We're not going to let this go on, I say it over and over again,” Beigel Schulman said. “We need to keep our voices heard. We have a right to be safe.”

Beigel’s parents lobbied for the “red flag” bill sponsored by Assemb. Jo Anne Simon (D-Brooklyn), which created a process in which weapons could be temporarily taken from a person who is a danger to himself or others. Gov. Andrew M. Cuomo signed the bill earlier this year. Simon, who also attended the Run 4 Beigel, said the law recognizes gun owners’ due process rights and gives them opportunities to have their weapons returned.

“We have the strongest gun-safety laws in the country,” Beigel Schulman said. “We are definitely a role model.”

Jeff Cohen, a 2007 graduate of Marjory Stoneman Douglas High School who now lives in Manhattan, said there are roughly 300 alumni living in the New York City area. They, too, began to organize and lobby after the horrific shooting, one of the deadliest mass shootings in U.S. history.

Cohen said the Parkland community has made gun control a front-burner issue because of the teachers who taught their students about change. He said his own activism brings up reminders of the lessons he learned from his government teacher, Jeff Foster.

“These kids are fighting, and they are organizing, and that is because they come from a strong school with great teachers,” he said. “Teachers who taught us how government is supposed to work.”