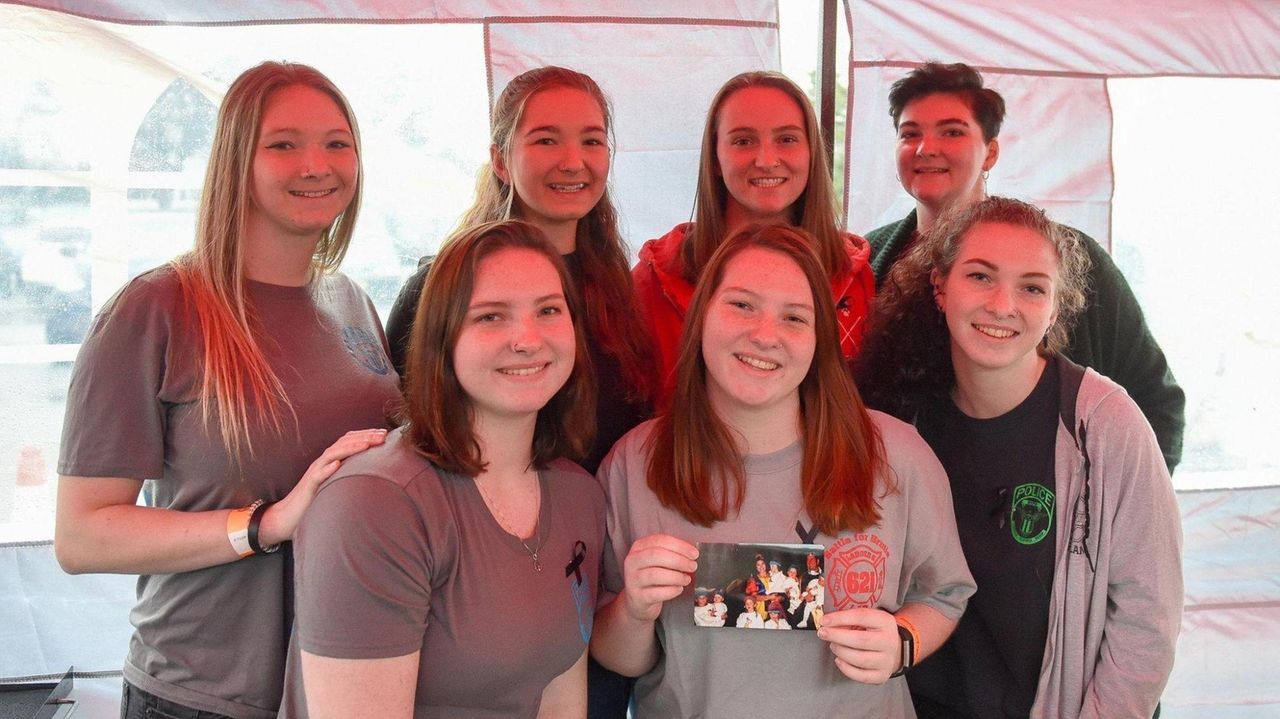 On Sunday, a fundraiser was held at Mr. Beery's in Bethpage for NYPD Sgt. Scott Johnston, who raised seven daughters in Levittown and is battling 9/11-related cancer.   Credit: James Carbone

The weather was icy but the stories were warm as almost 1,000 friends and family of Scott Johnston packed a Sunday fundraiser to benefit the beloved NYPD sergeant and former Levittown fire captain who is battling 9/11-related cancer.

Johnston, 50, and the father of seven girls, was diagnosed with metastatic melanoma almost two years ago.

“Every day is a fight for all of us,” said daughter Kaeley Johnston, 20, as she and her sisters mingled with supporters at Mr. Beery's bar in Bethpage. “One day it will be great and then the next day he can’t really do much. It’s really tough to watch.”

Because of his illness, Johnston was unable to attend but all of his daughters did.

'"The fight in all of us keeps us going every day," Kaeley said.

Scott Johnston is the kind of neighbor who, after a snowstorm, would use his snowblower to clear the block and dig out someone’s car before they even asked, said daughter Amelia Johnston, 19.

He also spent more than 30 years volunteering with the Levittown Fire Department and served as a captain.

“He’s fully committed,” said daughter Hannah Johnston, 22. “If someone he knows or someone in the community needs help, he will be there 100% giving all his effort.”

Supporters said they wanted to pay it back, setting up fundraisers and a Go Fund Me page to assist with the mounting medical bills Johnston and his wife, Kristin, are facing.

Additionally, their daughters are all in college or graduate school.

Olivia, 24, is studying for her doctorate at New York Institute of Technology; Kaeley attends The Citadel in South Carolina; Hannah is in graduate school at Queens College and Amelia is a student at the University at Albany.

“He has a huge family and he always made time for the community,” said Tommy Ryan, also an ex-captain in the Levittown Fire Department. “He taught me a lot and I am trying to follow his lead.”

Born in Brooklyn, Johnston moved to Levittown as a youngster. He and Kristin raised their girls in the same house where he grew up

He joined the NYPD in 1996 and worked in the 81st Precinct in Brooklyn and 111th Precinct in Queens before becoming a sergeant and moving to the 105th Precinct and then the Queens South Task Force. He is assigned to the department’s Strategic Response Group.

Sunday’s event, which featured food and live music, was filled with those who know Johnston through either his community work, years at the Levittown Fire Department or long career with the NYPD.

“He is a family guy, just a good person and a great boss,” said Dennis Minogue, an NYPD sergeant who worked with him in the Queens South Task Force. “You could always rely on him. He’s someone you would go out of your way to do something for because he’s such a good guy.”

Minogue said Johnston took some good-natured ribbing from fellow cops after his family was featured on the reality show “Nanny 911” back in 2004.

“He was always levelheaded,” said Anthony Bianco, an NYPD sergeant who worked with Johnston on the midnight shift at Queens South Task Force. “When things were not right or bad, I would get mad but he would never be like that. He would just go with the flow. A lot of times I wished I was like that. He’s just a great person.”

Rebecca Johnston said she loves hearing how her father has always used his sense of humor to help colleagues, the same as he does with his family.

“No matter … how hard of a day he's having, he’s always trying to crack jokes to make everybody around him feel better," she said.