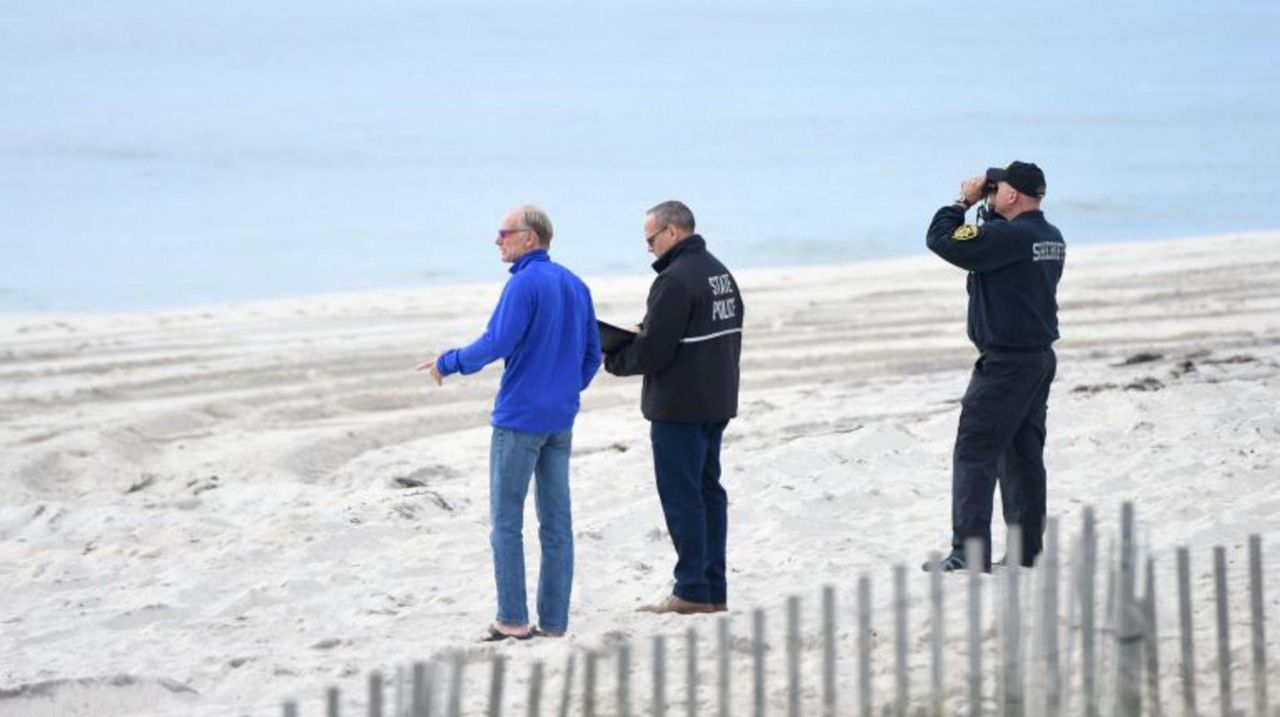 Search crews on Sunday said they have focused on an "area of interest" as they continued looking for any sign of the other two people aboard a small plane that crashed off Quogue on Saturday, Quogue Police Chief Christopher Isola said Sunday. Steve Mennuti of East Moriches also talked about witnessing the event. Credit: Newsday / David M. Schwartz; James Carbone

Rescue divers have recovered two more bodies from the twin-engine plane that crashed Saturday about a mile off the Hamptons coast with three aboard, as authorities determine when they can bring the fuselage to the surface.

State Trooper Daniel Ahlgrim said Sunday night that one of the bodies was female and another was male. They have not been identified. Earlier Sunday, authorities had identified a third body recovered as that of the plane's owner, Munidat "Raj" Persaud, 41, of Waterbury, Connecticut.

A Coast Guard spokesman, Petty Officer Steve Strohmaier, said Sunday that the fuselage was found in 20 feet of water. Authorities had no timeline for when the fuselage would be recovered. The Coast Guard had ended its search Sunday night, but Suffolk County police boats remained at the search area off the Surf Club in Quogue.

Persaud was one of three people aboard the Piper PA-34 when it hit the waters of the Atlantic Ocean at about 11 a.m. Saturday, officials said. One body was recovered Saturday, which State Police on Sunday identified as Persaud.

The fuselage location was detected by ship depth finders, which picked up anomalies on the sea floor, and then divers confirmed that it was the fuselage.

The plane, which seats seven, took off Saturday from a Connecticut airport for Charleston, South Carolina, authorities said.

The FAA said it will investigate the crash and the NTSB "will determine the probable cause for the accident."

Steve Mennuti, 42, of East Moriches, was surf casting with a friend at Rogers Beach on Saturday when he twice heard what he said was the whine of an airplane, as if it was doing aerobatics.

“It was one whine, then a second one and then silence, as if it disappeared out of thin air,” Mennuti said Sunday morning from a Quogue beach. He and his friend turned and saw four pieces splash into the water, “like leaves.”

Mennuti called 911 at 10:59 a.m. Saturday and told police the plane crashed about a mile east of his location and a half-mile out.

Calls to 911 from Mennuti and surfers who also reported seeing the plane sputter and crash brought scores of first responders to Dune Road.

Tim Carbone, manager of The Surf Club of Quogue, said he was working inside when he heard the high-pitched whine of an airplane engine. “I thought for a second it might be a stunt plane,” he said, adding he thought it was strange because it was a cloudy day with “spitting” rain. “The next thing, the engine just stopped,” he said. He immediately went outside and saw three pieces spiraling down into the water.

The plane's flight began Saturday morning from Connecticut’s Waterbury-Oxford Airport, and it landed at Danbury Municipal Airport before taking off again, said Alisa D. Sisic, a spokeswoman for the Connecticut Airport Authority. The plane was bound for Charleston Executive Airport, the FAA said. There was light rain and winds of about 10 mph in the area at the time, according to the National Weather Service.

Persaud owned two companies that train pilots, Danbury Flight Training and Oxford Flight Training, according to Connecticut business records. On the Oxford website, Persaud described himself as a commercial pilot and certified FAA maintenance inspector and technician, adding that he started the company in 2004. He previously worked as an airline flight engineer, employed by Pan American World Airways as a technical representative and avionics tech. Persaud also stated he studied aeronautical engineering at Vaughn College of Aeronautics and Technology in Queens.

According to FAA records, Persaud owned another Piper PA-34 that crashed May 20 on Bald Mountain in Vermont. The pilot in that crash died of his injuries and had received commercial pilot and flight instructor certificates just days before, according to the National Transportation Safety Board’s website. The pilot had been flying back to Waterbury-Oxford Airport from Burlington International Airport, against the advice of an expert adviser, who was surprised to learn he had elected to fly in rainy and cloudy weather instead of waiting a day, according to the NTSB report.

Two years ago, a student flying a Cessna plane that Persaud owned suffered serious injuries after he crashed in Pittsfield, Massachusetts, according to the NTSB, which cited pilot error.

On May 30, two days after Memorial Day, a pilot died when his World War II-era plane went down in a wooded area in Melville.

On June 2, a small plane crashed off the coast of Amagansett during a storm, killing all four people on board. Pilot Jon Dollard of Hampton Bays lost control of the twin-engine Piper Navajo, according to an initial NTSB report in July. Dollard, 47, was carrying passengers Ben and Bonnie Krupinski, both 70, and their grandson William Maerov, 22, all of East Hampton, from Newport State Airport in Rhode Island to East Hampton Airport. That wreckage was discovered about a mile south of Indian Wells Beach submerged in 50 feet of water, according to the report.

Way to Go! St. Anthony's student creates memorial garden
What happened to Gabby Petito? Key developments in the case
Medical examiner says it has responded to park where Brian Laundrie items were found
Reward doubled to $40,000 for info leading to arrest in Elmont acid attack
2:28
Cuomo lawyer seeks independent review of harassment report
Man involved in robbery that led to death of LI cop pleads guilty, DA says
Didn’t find what you were looking for?