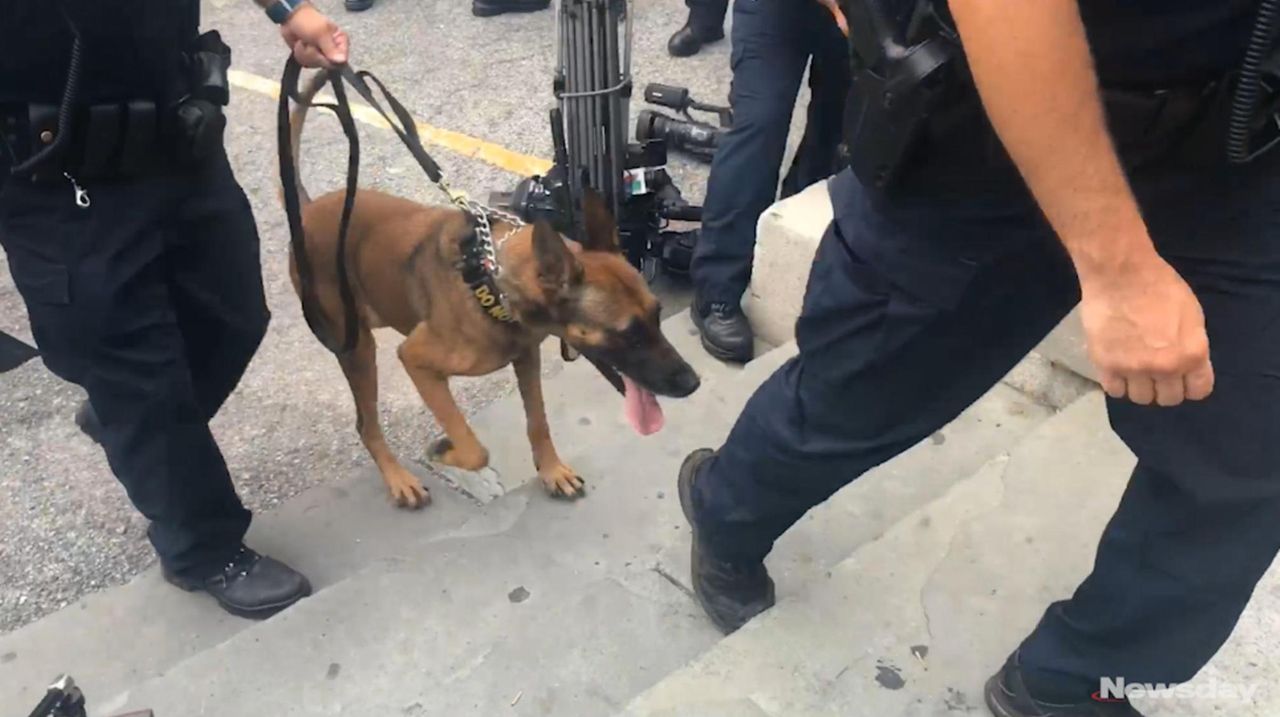 Dozens of canines, seen here on Randalls Island on Wednesday, are assigned to protect the millions of spectators expected to attend the Macy's 4th of July Fireworks show.  Credit: Newsday / Matthew Chayes

Each of the 2 million people expected to watch Wednesday night’s Independence Day fireworks from official viewing spots must be scrutinized by police officers, then pass through a checkpoint of cops’ radiation detectors, bomb-sniffing dogs and a “long-gun team,” the NYPD’s counterterrorism chief James Waters said.

Thousands of extra NYPD officers are working to secure the Macy’s 4th of July Fireworks Show, which begins about 9 p.m. as pyrotechnics are launched from barges in the East River separating Manhattan from Queens and Brooklyn, Police Commissioner James O’Neill said Wednesday afternoon on Randalls Island at an NYPD counterterrorism outpost.

The NYPD has estimated that there will be about 2 million spectators and 6,000 cops.

O’Neill said officers will be on the lookout for pickpockets, terrorists and others looking to disrupt the celebration of America’s declaration of independence from British colonial rulers.

“If you come down to the show and you see something that’s making you uncomfortable,” O’Neill said, “not only should you flag down a cop or make a 911 call, I think you have an obligation to do that.”

New this year, O’Neill said, cops have adapted tactics to avert a crowd attack similar to the Las Vegas shooting on Oct. 1, 2017, when a gunman opened fire from a tall building on a gathering of concertgoers, leaving 58 people dead and more than 500 injured before he committed suicide.

“We have to worry from on up high,” O’Neill said.

He said the police are also cognizant of strategies to avoid a terrorist truck attack like the one in 2016 in the French seaside resort of Nice, when a truck mowed down pedestrians during a Bastille Day celebration and killed 86 people. Since the Nice attack, the police have increased the number of sand-filled trucks to prevent drivers from plowing into crowds.

Asked about his message to would-be terrorists, O’Neill said, “This is not the place to be. This is going to be the most well-protected piece of real estate in the United States.”

He said there would also be extra cops patrolling elsewhere in the city, including the subways.

There are four spectator access points on Manhattan’s East Side: FDR Drive-Houston Street, 23rd, 34th and 42nd streets — in addition to spots in Brooklyn, such as at Brooklyn Bridge Park, Domino Park and the Promenade; and in Queens, at Gantry Plaza State Park and Hunters  Point South Park.