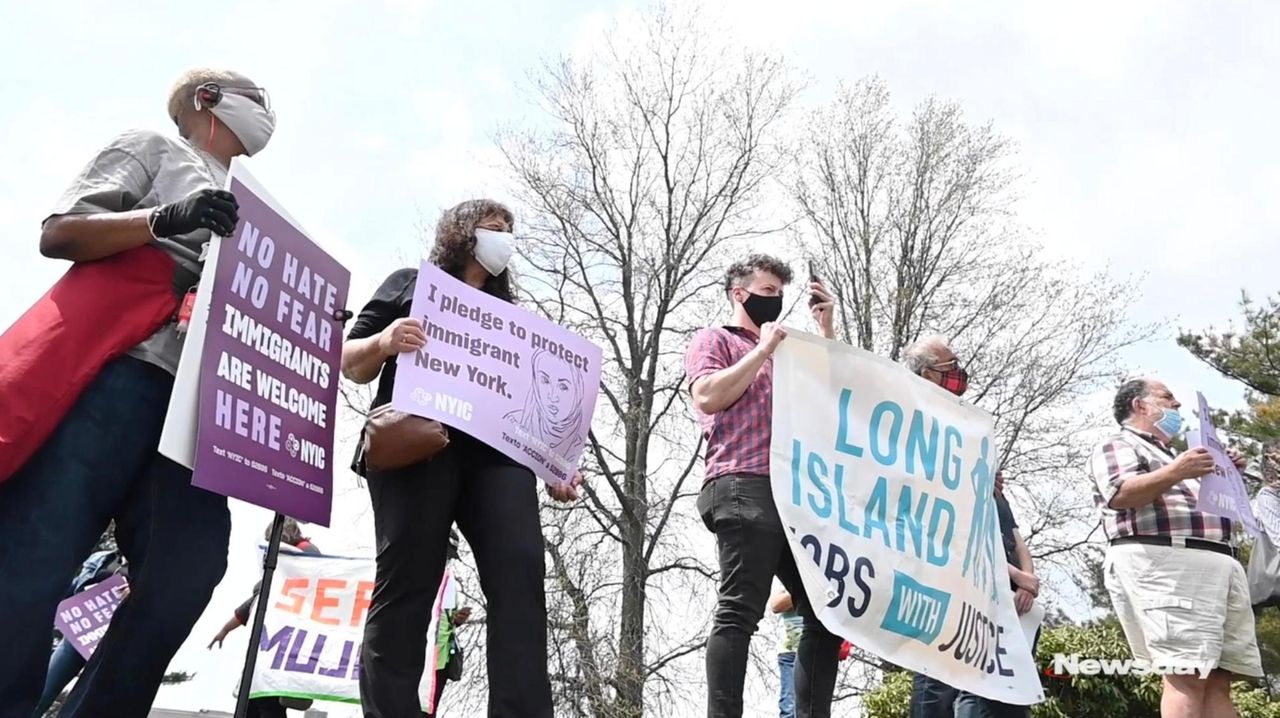 Cecilia Martinez, a coordinator for National TPS Alliance, joined others Monday outside Sen. Chuck Schumer's office in Melville where they called for him to do more to help immigrants gain citizenship status. Credit: James Carbone

The rally, which attracted about 50 people, was part of an ongoing nationwide effort, "March to Victory: Relay Across America," to draw attention to a series of immigration reform proposals. Among them, reforming the federal Deferred Action for Childhood Arrivals program. More commonly known as DACA, the program was started to protect immigrants brought into the country as children, and others here on temporary protected status, from deportation.

Supporters want citizenship for those who came to the United States as children — in some cases, decades ago — as well as for immigrants who are essential workers but here illegally, and people with temporary protected status.

Those who met outside the office of Schumer (D-N.Y.) wanted "to make sure that he doesn’t forget about TPS or DACA or any of the promises that he made before the elections," said Cecilia Martinez, a coordinator for National TPS Alliance, an advocacy group for temporary protected status holders — people fleeing countries in turmoil.

Angelo Roefaro, a spokesman for Schumer, defended the senator's work, including his support for the American Dream and Promise Act and the Citizenship for Essential Workers Act, "which provide a path to citizenship for Dreamers, TPS holders, and frontline workers."

An estimated 89,000 immigrants lived on Long Island in 2018 without legal status, according to the Manhattan-based Center for Migration Studies.

Some who attended the rally Monday held signs with messages that included, "I pledge to protect immigrant New York" and "No Hate, No Fear, Immigrants Are Welcome Here."

Others pushed for President Joe Biden to do more than talk about supporting immigration reform.

Biden must understand that being sympathetic to immigrants is not enough to help, said Patrick Young, downstate advocacy director of the New York Immigration Coalition, which has an office in Hempstead.

Young said those who have lived in the United States for years on temporary protective status or moved here as children, should be granted citizenship. He also said essential workers in the country illegally should gain citizenship status.

"We’re really looking for that to be resolved into permanent residence and citizenship and similarly for those who worked throughout the pandemic as essential workers, we want them to be able to also be recognized for the contribution that they made as well," he said.