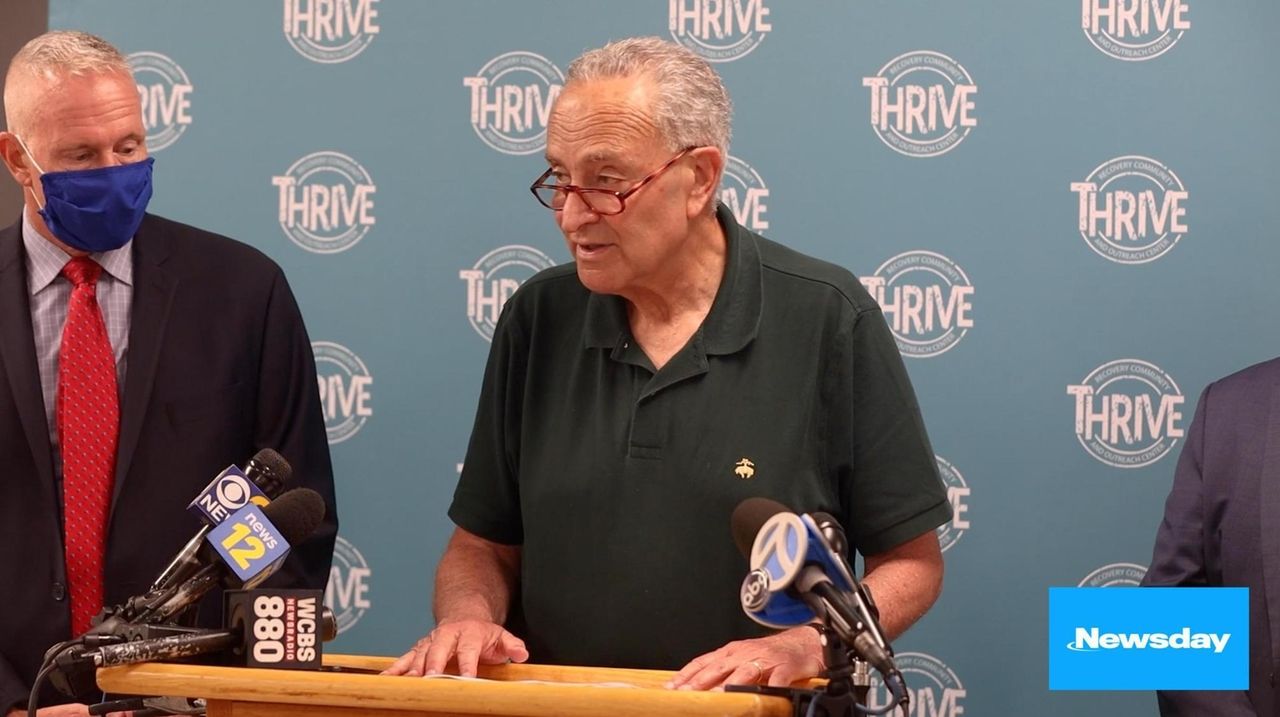 With fatal overdoses spiking on Long Island amid the pandemic, including six recently on the East End, new federal funds will go toward reducing the region's addiction scourge, Sen. Chuck Schumer said Thursday.

The $1.6 million, available now to Long Island through New York’s Opioid Response grant program, will be used for a new recovery center on Suffolk's East End, a new anti-drug coalition in Roosevelt and an existing one in Hempstead, as well as to create a judicial outreach program to reduce recidivism, said Schumer (D-N.Y.).

The federal Substance Abuse and Mental Health Services Administration is supplying the money, which can also be used to train and hire young people in recovery and for centers to bring on additional psychiatric staff.

"More help is needed," Schumer said at a news conference Thursday at the THRIVE Recovery Community and Outreach Center in Westbury. "This pandemic has led to a rise in addiction and thus an increased need for services."

The senator said he is pushing for a $4 billion funding increase to the Substance Abuse and Mental Health Services Administration in the fiscal 2022 budget, which would bring the agency's total to $9.6 billion. Long Island, he said, can tap those funds for additional funding for drug and alcohol treatment centers, medication, prevention programs and recovery support.

An additional $300 million for treatment and prevention is available in the $1.9 trillion economic stimulus bill while $5 billion more is slated for inclusion in the budget reconciliation package, on which Congress will likely vote in the fall, Schumer said.

The announcement comes during a trying time for Long Island's battle against opioid addiction.

Six people died earlier this month from a bad batch of fentanyl-laced cocaine in the North Fork communities of Southold and Shelter Island. Three others overdosed but survived, police said.

Suffolk District Attorney Timothy Sini announced Thursday that two alleged drug dealers have been arrested in connection with the ongoing investigation into the suspected fatal overdoses on the East End.

Across Long Island, projected fatal overall drug overdoses increased 34% in Nassau and nearly 12% in Suffolk in 2020, which experts linked to social isolation, financial anxieties and mental health challenges caused by the coronavirus pandemic.

And with the pandemic showing no sign of letting up, 2021 is on track to be the worst year yet on Long Island for fatal overdoses, said Jeffrey Reynolds, executive director of the Family and Children’s Association, a Mineola-based agency that provides drug treatment.

Ryan Kiser, 37, of Babylon, a peer recovery advocate at THRIVE, has been clean for five years after being addicted to alcohol and opioids. He said the federal dollars are vital to breaking the cycle of addiction.

"The more support we have the better off we are," Kiser said. "And the more our communities can heal. There is hope."