Ralph Gismondi knew he wasn't going to make it.

The retired FDNY captain, who spent weeks on the smoldering wreckage of Ground Zero, only to find a second career as a JetBlue flight attendant, told his wife Ann in late March that he could no longer fight off the deadly coronavirus that had begun to ravage his 68-year-old body.

Gismondi couldn't breathe without an oxygen mask and seemed to be in constant pain. And while Ann tried to encourage her husband of nearly 50 years to keep fighting, the end was near. Gismondi was placed on a ventilator March 20 and died April 5.

"I didn’t think he was going to die but he did. Ralph knew," Ann Gismondi said. "Here he was: a 9/11 survivor and this is what took him out."

As the 19th anniversary of the World Trade Center attacks approaches, Ralph Gismondi joins a growing list of 9/11 first responders who have faced a dual set of painful challenges — each originating from that clear Tuesday morning in lower Manhattan 19 years ago.

First the firefighters, police officers, EMS and construction workers who toiled for weeks at Ground Zero, inhaling toxic fumes and dust, contracted serious respiratory illnesses or cancers. And now, many of those same first responders, burdened with weakened immune systems and comorbid conditions, contracted COVID-19 and were unable to fend off the virus.

Ann Gismondi has no doubt that her husband, who had three bouts with skin cancer and was being treated for a chronic cough, would be alive today if not for 9/11.

"There is no doubt in my mind that it had an impact," she said. "He was on a pile with asbestos and all of that toxic materials that were still floating around down there. It had to have done damage." 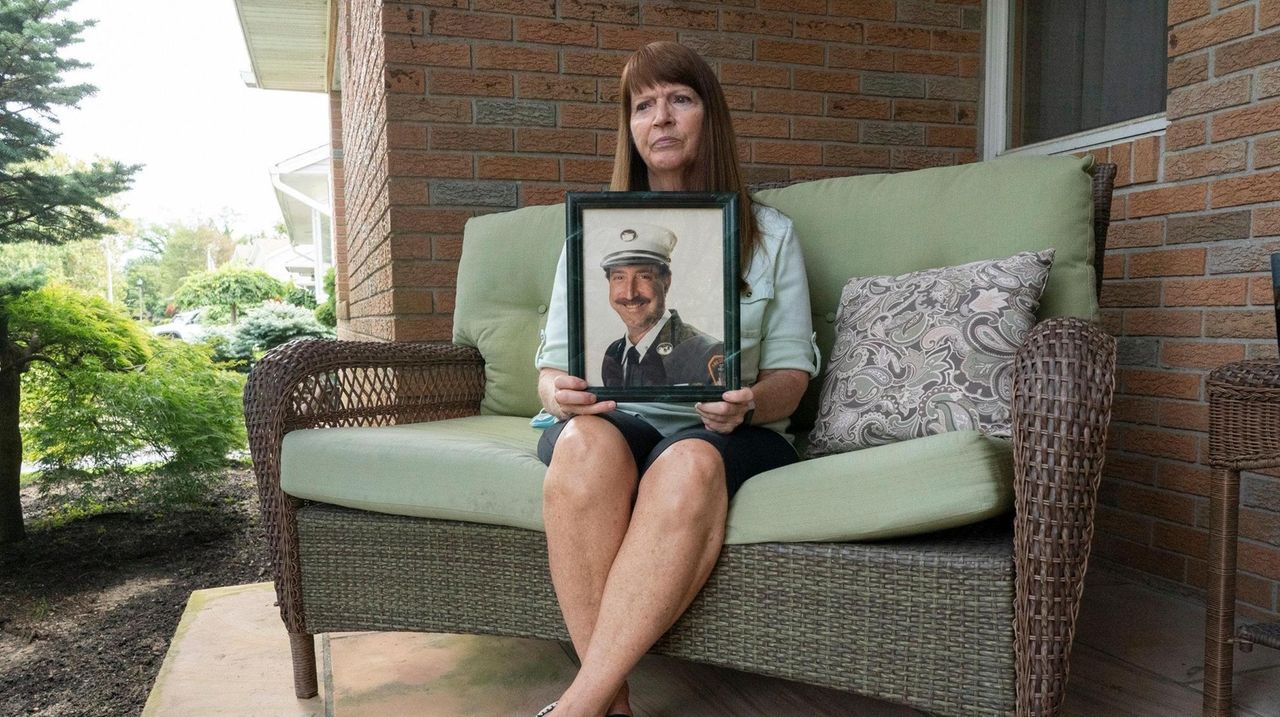 Questions about 9/11 related illnesses and COVID-19 Nearly two decades after 9/11, there are still questions about the relation of some illnesses to toxic debris at Ground Zero and now, a question of how those underlying illnesses could have resulted in first responders succumbing to the COVID-19 virus.  Credit: Newsday / Tom Ferrara; Charlie Eckert

As the nation prepares to remember the 19th anniversary of the attacks, the death toll continues to rise.

More than 125,000 people, including 79,000 first responders, have enrolled in the World Trade Center Health Program, and at least 18,000 have been diagnosed with a 9/11-related cancer, according to federal statistics. More than 2,000 first responders, office workers and residents of lower Manhattan have died from a 9/11-related illness and officials anticipate that figure will eventually exceed the nearly 3,000 deaths that occurred on 9/11 itself.

It remains unclear how the Sept. 11 Victims Compensation Fund, which provides financial assistance to those exposed to the pollutants emanating from the sites in lower Manhattan, the Pentagon near Washington, D.C., and Shanksville, Pennsylvania, will view the case of first responders with underlying WTC medical conditions who later died of COVID-19.

The VCF said it has not reviewed any claims from first responders who succumbed to COVID-19 after being diagnosed with a 9/11-related illness.

A high percentage of the 9/11 health conditions are respiratory diseases such as asthma, COPD and interstitial lung disease. COVID-19 attacks that same organ, saving its most deadly consequences for victims with weakened immune systems, such as those going through chemotherapy, medical officials say.

"Everyone in the 9/11 community is looking over their shoulder wondering when they will get a 9/11 cancer," said John Feal of Nesconset, a demolition supervisor at Ground Zero who spent 11 weeks in the hospital, and had part of his foot amputated after a 4-ton steel beam fell on his left foot. "Now they're looking over their shoulder wondering if they are going to get COVID-19."

On Sept. 12, Feal's 9/11 advocacy group, the Feal Good Foundation, will read the names of 169 first responders who died during the past year from a 9/11-related illness.

"Life for those affected by 9/11 has become that much more difficult to manage and navigate," said Feal, who contracted COVID-19 in the spring. "Many are not going to see 60 or 65. That's a fact."

Michael Barasch, managing partner at Barasch McGarry, a Manhattan firm that represents 15,000 members of the 9/11 community, said more than 100 clients have died from the coronavirus. They include 17 Long Islanders, 12 of whom were first responders.

"If you have this underlying respiratory condition you are much more prone to get coronavirus," said Barasch, who argues that the VCF should treat first responder virus victims as line of duty deaths. "And if you do get it, your lungs are not as healthy as a normal healthy person and you will be less likely able to fight it."

Retired FDNY Fire Marshal Michael Hankins was known as the consummate gentleman, who coached youth sports and took student athletes under his wing, according to his wife, Victoria Burton, a retired NYPD detective from St. Albans.

In March, he came down with a low-grade fever and was hospitalized after collapsing in a doctor's office. Hankins tested positive for COVID-19 on March 14 and was intubated the following day. He spent almost three weeks on a ventilator before succumbing to the virus on April 2.

"It's still so hard to wrap my head around what's happened," said Burton, who met her future husband in a makeshift morgue at Ground Zero. "We always thought he was going to pull through and when he didn't it was such a shock because he was strong and so active."

Data collected by the National Institute for Occupational Safety and Health, which runs the WTC Health Program, found 1,162 first responders, along with 278 other individuals who lived, worked or went to school in lower Manhattan on 9/11, reported contracting COVID-19. NIOSH said 44 program participants have died from COVID but concedes the figure is not conclusive.

The Stony Brook University WTC Wellness Program in Commack, which provides care for 9/11 first responders, surveyed its 10,000 members and found 250 tested positive for the virus and 330 others showed symptoms consistent with COVID. Seven patients have died from the virus, according to Dr. Benjamin Luft, director and principal investigator of program.

The data, Luft said, shows that active duty first responders are more likely to contract the virus than retirees.

"Active responders are the most at risk," Luft said, pointing to the nature of their work and their contact with the public. "The retirees practice social distancing and other methods to stay safe."

World Trade Center first responders, Luft said, are more likely to show symptoms from the virus than the general population and the survival rate decreases for those age 68 and older.

"Those in the WTC Health Program have been through hell with their health," Luft said. "And as time goes on, and they become more relaxed and less vigilant, we may see more significant uptick in the disease. So it’s really important they keep that vigilance and remember they are susceptible and need to be careful."

The pandemic has thrown a monkey wrench into the solemn ceremonies marking the anniversary of the attacks. Many events done in-person in years past will be recorded and presented virtually.

Former Suffolk detective Phil Alvarez, whose brother, Lou Alvarez of Oceanside, is credited with helping secure health care benefits for thousands of fellow Ground Zero responders before his death in 2019 from colorectal cancer, said it will be difficult for members of the 9/11 community to be separated at a time when they need each other so much.

But Alvarez said he understands the precautions.

"Everyone I deal with either has COVID or are absolutely terrified that they will be dealing with it," he said. "They are susceptible, dealing with upper respiratory ailments and cancers. It’s causing havoc."

Deborah Mouradian of Nesconset understands those concerns all too well.

Deborah's husband, Robert Mouradian, a retired police officer in the NYPD's Highways Bureau, spent weeks working on the rescue and recovery efforts at Ground Zero. He retired in 2005 and later took a job with the Town of Brookhaven, serving as a captain in the Public Safety Department.

In late March, Robert Mouradian was diagnosed with Stage 4 colon cancer stemming from his work on the pile. While he never contracted COVID, the pandemic affected his treatment, forcing him to remain isolated from friends and family during the final months of his life. Mouradian died Aug. 18 at St. Catherine of Siena Medical Center in Smithtown.

"He was a hero and a wonderful father who loved his family," Deborah Mouradian said. "I know that he fought like a champion."

But Mouradian says her husband had no regrets.

Pandemic forces two 9/11 ceremonies for reading of victims' namesThere will be separate ceremonies to remember those killed in the attacks — just blocks apart in lower Manhattan — after a disagreement over whether to read victims' names in person or via a recording.

LI school start dates range from AAug. 26 to Sept. 10
Woman whose life was filled with 'fun little stories' dies at 97
Fauci: 'Things are going to get worse' with COVID-19
Riverhead to activate remaining downtown security cameras
Barney the Bull rescuers to public: Call 911, don't try anything yourselves
LI restaurants, theaters push back on state's vaccine suggestion
Didn’t find what you were looking for?