Two children in a Jeep were ejected onto the roadway and rolled over by the vehicle after it collided with another car in a "mass casualty" incident just outside Splish Splash Water Park in Calverton, Riverhead on Tuesday afternoon, police said.

Nine people were injured when a Jeep Wrangler carrying eight occupants tried to turn into the water park in the path of an oncoming Dodge Charger at 3:37 p.m., police said.

"When the Jeep spun around, the kids were ejected from the back," said Officer Michael Purick, who handled the crash report. 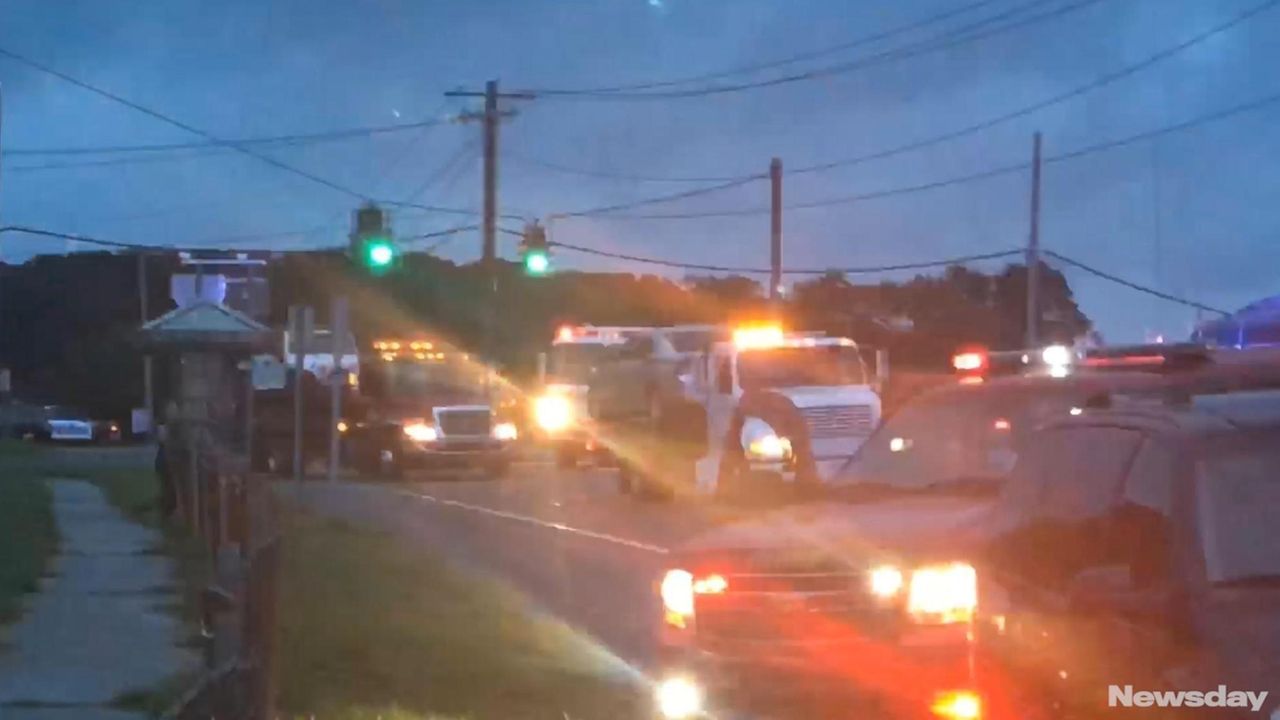 Vehicles towed from Splish Splash crash A Jeep Wrangler and gray sedan are towed from a crash scene outside Splish Splash Water Park in Calverton at around 8 p.m. Tuesday. Credit: Newsday / Jean-Paul Salamanca

A mother in the Jeep was holding her 10-month-old child in her lap, Purick said.

The two children were airlifted to Stony Brook University Hospital, police said. Four others in the Jeep were taken to the same hospital and the remaining two went to Peconic Bay Medical Center in Riverhead, where the Dodge driver was also treated, police said.

None of the injuries were life threatening, police said.

"It could have been worse," Purick said.

The Jeep's driver, Joshua Alvin Burns, was issued tickets for not having his three children in seatbelts or a baby car seat. He also got a ticket for having a bald tire and other charges may be pending, police said.

Police had shut down traffic on Route 25 from Edwards Avenue to Route 58 while investigating the crash.

Chief Rod Richardson of the Riverhead Volunteer Ambulance Corps said two of his advance paramedics were already on the road when the emergency call came, and after they heard what sounded like a "mass casualty" event, they called several other departments. His rescuers were the first paramedics at the scene and their dispatch calls helped get other paramedics to the site within minutes, including about 25 fire and ambulance personnel from Riverhead, Wading River, Ridge, Flanders and Manorville, the ambulance corps chief said.

"We were spread a little thin, but the help came pretty quick," Richardson said.

"There were three children in the Jeep and two were ejected. Nobody died, thank God."

The New York State Police responded with its accident reconstruction unit for the investigation, which is ongoing.

The collision happened outside the water park, where general manager Michael Bengtson was directing traffic leaving the park, which closes at 6 p.m.

Investigators still had the roads blocked Tuesday night as they gathered evidence.

Kathleen Edlund, a Ridge resident, said she had been stuck on the side of the road for more than an hour because of the accident. She was waiting for her son, who works at Splish Splash, to finish work so she could pick him up and head home.

“But it’s OK,” Edlund said. “I don’t mind waiting for my son. That,” she said pointing to the crash site, “is horrific.”