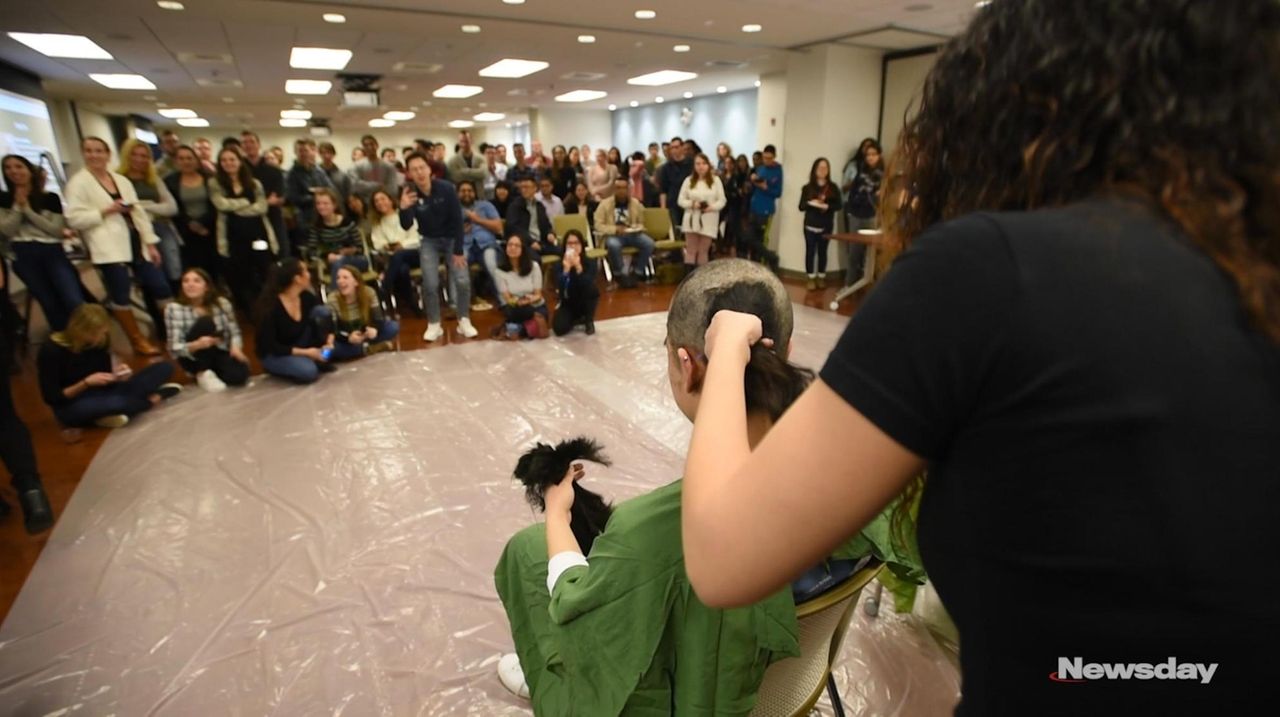 On Wednesday, Feb. 27, 2019, the Donald and Barbara Zucker School of Medicine at Hofstra University/Northwell Student Affairs department held its annual St. Baldrick's Day event, where some participants shaved their heads, in an effort to raise money and awareness for childhood cancer. Credit: Howard Simmons

The bell signaling the end of the school day had rung hours earlier on the first Friday afternoon in March, yet the gym at Commack High School still buzzed with activity. Some 65 parents, children and teachers were there to have their heads shaved by the seven volunteer barbers-in-training, all of them taking part in the school district’s annual St. Baldrick’s event to raise money for childhood cancer.

For 10-year-old Brody Flood of Commack, this was personal: Four years ago, his brother, Colin, died of leukemia at the age of 8.

Brody, who raised $3,930 of the more than $12,000 his team collected, says he’s participating in the shaving event for the first time, “in memory of my brother.”

“The boys were best friends,” says his father, Kevin, 47, who volunteered at the event.says. Because of Colin’s compromised immunity, he was home schooled for three years and the brothers got really close.

“If my parents are trying to remember something [about Colin], they ask me,” Brody says.

Standing nearby, Callum McGuigan, 10, of Commack, was patting his smooth, newly shaved head, and noted that it felt “really weird.”

McGuigan raised $1,500 in memory of his Aunt Annemarie, who died two years ago from cancer of the appendix.

“My mom brought it up. I said I wanted to do it,” Callum explains.

Meghan McVetty, 30, of Commack, shaved her head to show Caleb, her 9-year-old son, who has autism and doesn’t like getting his hair cut, “that everyone needs help.”

“It’s OK to be afraid of the buzzer, but it won’t hurt you,” McVetty says of the lesson she wants to impart to her son.

From idea to reality

What began as an expression of gratitude between three colleagues in 1999 has morphed into a remarkably successful not-for-profit organization that’s made considerable headway into battling childhood cancer. Events across Long Island alone span at least through early April.

Tim Kenny recalls turning to colleagues John Bender and Enda McDonnell in his Northport backyard over the Fourth of July weekend in 1999, musing that they were all rather fortunate and should do something to give back.

“We came up with head shaving with the purpose of being in solidarity with the children who go through chemo, who lose their hair,” Kenny said in a telephone interview.

The trio decided to turn the next St. Patrick’s Day’s typical revelry at Jim Brady’s, a pub in Manhattan’s financial district, into a more purposeful day by setting a goal of raising $17,000 by shaving 17 heads.

They donated the money to the National Childhood Cancer Fund, and five years later, they established St. Baldrick’s Foundation in California.

Because most cancer occurs and is diagnosed in adults, most oncological research is geared toward adult-onset cancers, notes Kathleen Ruddy, chief executive of St. Baldrick’s Foundation.

“There are as many types of cancers that affect children as there are [those that affect] adults, but because kids are not little adults, their bodies and minds are still developing,” Ruddy says. “They need different types of treatment and different approaches to treatment.”

Many kids who do survive childhood cancer grow up to experience delayed but life-threatening effects of the treatments that saved their lives.

In 2005, the first year the foundation operated as its own charity, Ruddy says, it noticed a dearth of pediatric oncologists.

“We created a program to start funding early career scientists,” she says, adding that there are four parts to the program: summer fellows, fellows, scholars and international scholars. To date, the foundation has funded 135 fellows (doctors who are just beginning to do research in pediatric oncology), 20 summer fellows, 111 scholars (full-fledged researchers since completing their fellowships) and eight international scholars.

At many research centers, only the more common kinds of cancers are studied, so that patients with rarer forms have to travel farther for treatment, which can be both inconvenient and expensive.

“We have incentivized the institutions to open up the trials and do all the training and the prep work in advance, so that they’re ready when that patient appears,” Ruddy explains. “Now, those trials are well underway and beginning to produce results.”

Over the years, the charity has also begun new clinical trials and made new lifesaving drugs available.

The foundation's very first fellow grant was awarded in 2005 to Dr. Sharon Singh at Cohen Children's Medical Center in New Hyde Park. Singh was awarded a new grant in 2013 to study the effects of the p53 protein on Diamond Blackfan anemia, an inherited condition that leads to anemia, birth defects and cancer.

Another grant recipient working at Cohen Children's Medical Center is Dr. Jonathan Fish, who has researched patients' awareness of risks associated with treatment and their ability to follow medical recommendations and referrals.

The foundation has also partnered with “Stand Up to Cancer,” an initiative funded by the entertainment industry to combine genomics and immunotherapy for the first time. This resulted in Kymriah, the first gene therapy approved in the United States to treat kids with a very resistant leukemia who lack other options, Ruddy says.

“And now 83 percent of those kids have no evidence of disease,” she says, adding that the St. Baldrick’s Foundation’s funding made that possible.

“I think it’s safe to say that St. Baldrick’s has played a role in virtually every advancement [in childhood cancer] that’s been made in nearly 20 years,” she says. In many cases, the organization funded research at various stages to ensure that it “really translates to longer lives and healthier lives for our children.”

In the 10 years that Commack has held annual shaving events, the school district has raised about $700,000.

“Everyone is affected by cancer,” says Scaduto, 44, of Merrick. “One of my wife’s close friends that she grew up with had a brain tumor and passed away in high school. You see it everywhere. You know it. You’re aware of it. To think of a person with cancer is horrible, but to think of a child with cancer is more devastating.”

Eric Scott, 38, of Commack and his two sons, Jack, 7 and Charlie, 4, had their heads shaved together.

Eric, who works in the Hewlett-Woodmere School District, notes, “Everything I’ve done for the past 18 years is for kids. What better way to give back? No child should have that kind of suffering and pain.”

“We shave our heads so sick people don’t get cancer anymore,” Jack offers.

“I’ll do it until I don’t have anything left to shave off,” quips Eric.

Christopher Eng comes to the Commack event from his Farmingville home because his wife, Teresa, is a math teacher at the high school.

There is one downside, adds Eng. “It’s just cold afterwards.”

Looking back, Kenny, who now lives in Wilton, Connecticut, can’t believe how much has been achieved since he and his friends made a gentleman’s agreement two decades ago.

Still, Kenny says he won’t be satisfied until a perfect cure rate has been reached.

“I would love to have on my epitaph that we retired St. Baldrick’s because we found cures for all types of cancer,” he says. “It’s great that we have done what we’ve done and helped find cures, but our job isn’t done until we move that 80 percent survivorship rate up to a hundred.”

Juan Andre Mauri let his hair grow long for 18 months, all in anticipation of getting most of it chopped off on Feb. 27.

Mauri, 27, is among the Hofstra University medical students donating their hair and raising money to help children with cancer at the school’s annual St. Baldrick’s Day fundraiser.

For the event, Hofstra students would transform a room in the Zucker School of Medicine into the neighborhood barbershop, replete with professional haircutters and those vinyl smocks they throw over people.

Mauri’s hair was a good 10 inches long the day before the event. As the fundraiser was drawing closer, he shared second thoughts about getting his locks chopped off.

“It’s become part of my identity,” said Mauri, a second-year medical student, of the dark mane that extended past his shoulders.

The premium Mauri had put on his hair, destined for the makeshift barber shop’s floor, helped him better understand what children battling often lethal forms of cancer endure though medical treatment.

Worries of young cancer patients extend beyond how their heads look without hair, but they still suffer emotionally when they lose it, he said.

“They can feel they stick out as the ‘other,’ ” Mauri said. He feels a bit more solidarity with these kids, knowing his hair will become a wig they can wear. “It can help return some of their self-identity.”

About a dozen of the medical students had volunteered to get their hair cut. Some had raised money through donations, others would just donate hair. There is an 8-inch minimum length to donate. The larger Hofstra campus will hold a similar event closer to St. Patrick’s Day, but the medical students do it early because of their examination schedule.

The events at Hofstra have been known to take on a raucous air — not unlike the Irish holiday from which the annual hair-cutting gets part of its name — with dozens of students filling the room to watch, goading their friends to get a buzz cut and cheering on those who take the leap.

In donating her locks, Juana Vargas said she sees it as giving her hair a “second life.” The Hofstra medical student has let her dark hair grow since November and it sits just above her waist. The cutting will leave her hair hanging just below her shoulders.

“I’ve had a few friends who’ve battled cancer,” said Vargas, 24. Besides, she added, “I like having short hair. Long hair is too much maintenance.”

Steven Parra, another med student, was going all the way and having his entire head of black curly hair shaved off. He’s raised $500 in donations.

St. Baldrick’s by the Numbers

• There have been head-shaving events held in every state and in 28 countries.

• Last year, the foundation took in more than $35.7 million.

• For 2019, there are 800 events registered that are expected to surpass last year’s fundraising.