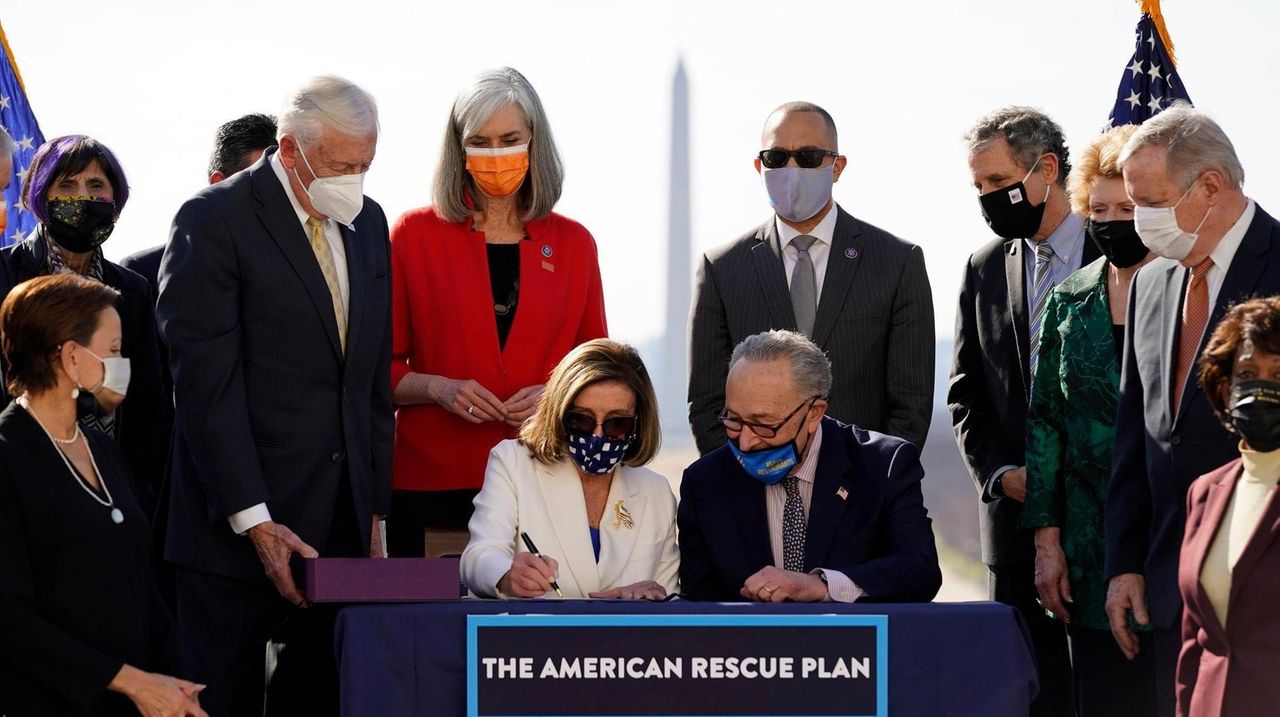 WASHINGTON — The $1.9 trillion stimulus and relief bill passed by House Democrats Wednesday will channel a flood of federal money to Long Island, including an estimated $1 billion to county, town and municipal governments.

Hundreds of millions of dollars more will arrive in $1,400 economic impact checks to individuals and families by the end of March, extended $300 unemployment bonuses, and aid to families with children through tax credits, child care funding and money for reopening schools.

Other funding will flow to struggling renters and homeowners, small businesses, and restaurants and live venues such as theaters and concert halls, while also funding vaccine purchases and vaccinations as well as health care providers.

Democrats praised their sweeping legislation as a boon to the nation, arguing it was better to do too much than too little to address the pandemic and the economic distress it has caused.

Republicans dismissed the package as a boondoggle containing a "liberal wish list" unrelated to the pandemic.

But Long Island members of Congress and officials of counties, towns and municipalities praised the infusion of cash they hope will arrive soon to help them cope with the loss of revenue and added expenses caused by the pandemic.

"Help is on the way for anyone and everyone in need," Suozzi said.

Rep. Kathleen Rice (D-Garden City) said she was thrilled the bill delivers federal relief that "so many families, businesses and communities on Long Island have been waiting for."

While critical of the legislation, Rep. Lee Zeldin (R-Shirley) noted that Democrats used a bill he co-sponsored "as the outline for the formula to distribute funds to our local communities."

Long Island’s $1 billion in direct state and local aid is part of an estimated $23.8 billion in direct funding to New York state, according to estimates published by the office of Sen. Chuck Schumer (D-N.Y.), the Senate majority leader who helped shape the legislation.

Previous coronavirus relief bills had required the money to be used for coronavirus-related expenditures.

But the new measure allows governments to use the funds to cover revenue losses caused by the pandemic; necessary infrastructure investments; payment of essential workers; and for costs arising from the COVID-19 health emergency including assistance to households, businesses, nonprofits and aid to impacted industries, such as travel and hospitality.

New York State government gets the lion’s share of the stimulus and relief funds — about $12.5 billion — and New York City comes in second with $4.3 billion.

The Town of Hempstead — the only town in the nation to have gotten CARES Act funding a year ago — finally finished distributing that $103 million allotment, which came as a surprise and at the expense of Nassau County last year.

Now Hempstead stands to be sent another estimated $84.1 million.

"As we did with the proceeds received in the initial CARES funding, we will be following the guidelines that are being set forth and work with all of our jurisdictions," Hempstead Town Supervisor Donald X. Clavin Jr. said in an interview.

Clavin said the new funds could help since the town lost anywhere from $30 million to $35 million in revenue last year.

Suffolk County is in line for an estimated $286.4 million.

According to Schumer’s office, smaller cities, towns and villages across New York State will get about $825 million in a direct allocation of federal assistance based on population size.

The U.S. Treasury Department will establish guidelines for distributing those funds. The department will funnel the money through state governments, which will act as conduits to get the allotment out in the fastest way possible to address the effects of the pandemic.

Freeport Mayor Robert T. Kennedy, who just finished his term as president of the New York State Conference of Mayors, said he was anxiously awaiting the funding.

"The village of Freeport alone has in excess of $8 million lost in a combination of revenues and expenses," Kennedy said in an interview. "Freeport is the second largest village in New York State and we’re bigger than 50 cities. And we never received a penny from this cash grant so far."

$1 billion to county, town and municipal governments in Nassau and Suffolk counties.

Hundreds of millions of dollars in $1,400 economic impact checks to individuals and families in Nassau and Suffolk.

An estimated $397.7 million for Nassau County.

Source: Estimates of allocations by the office of Sen. Chuck Schumer (D-N.Y.)

White House: Stimulus checks to be disbursed by month's endThe House will vote this week on a relief package that includes $1,400 direct cash payments to individuals earning $75,000 or less and married couples who make up to $150,000.