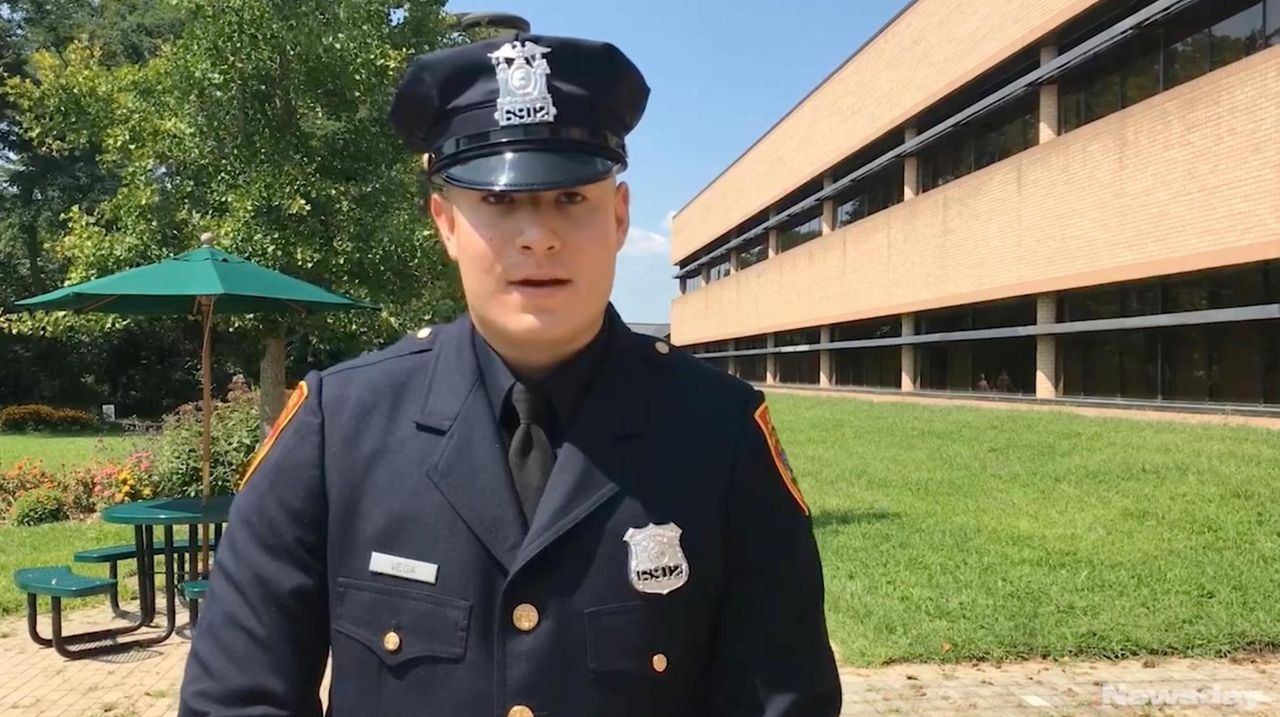 New Suffolk County Police Officer Kevin Vega talked about his inspiration for joining the force after graduating from the police academy on Friday. Credit: Stefanie Dazio

Thirty-three Suffolk County police recruits graduated from the academy Friday, including a new officer who said he felt safer growing up in Brentwood and Central Islip when he saw a marked cruiser nearby.

A marked Suffolk police cruiser’s presence, however, reassured him, he said.

"As I walked home at the end of the day, I felt a lot more comfortable, a lot more relaxed and a lot more safe with just the presence of that officer in that car being there," he said in an interview. "So now, I became a police officer because I want to be that officer, sitting in that car, inspiring others, helping others and making others feel safe."

Vega, a 2012 Central Islip High School graduate who is studying criminal justice at Farmingdale State College, will begin his career in the First Precinct in West Babylon. He also is a department-certified Spanish interpreter.

"Now he's one of us," Police Commissioner Geraldine Hart said at the graduation ceremony at Suffolk County Community College in Brentwood.

The class — the department’s 174th — includes three officers who came from the NYPD and 10 who are military veterans, officials said. Twenty-five recruits are from Suffolk County, five are from Nassau and three hail from New York City.  Twenty-eight recruits are white, four are Hispanic and one is Asian. Five of the new officers are women.

Thirty-six percent of the class, including Vega, are fluent in Spanish.

"Having organic, native Spanish speakers helps us better serve our communities," Chief of Department Stuart Cameron said in an interview.

After a 30-week academy and more than 1,000 hours of training — a week longer than previously because it included additional training — the new officers will now go to the force’s precincts for field training.

“We expected and demanded the best and you delivered,” Hart said.

Recruit Class President Officer Craig Capobianco Jr., a Marine, said recruits had to go home and iron their uniforms, shine their shoes — which were never shiny enough for their instructors' standards — and study for the next day. He congratulated his fellow classmates and told them to be safe out in the streets.

“Wear that shield with pride and integrity, and know that it can easily be tarnished,” he said.

“This department has been in the forefront of confronting and overcoming the challenge of MS-13,” he added, and has “put that gang, that criminal organization, on the run.”