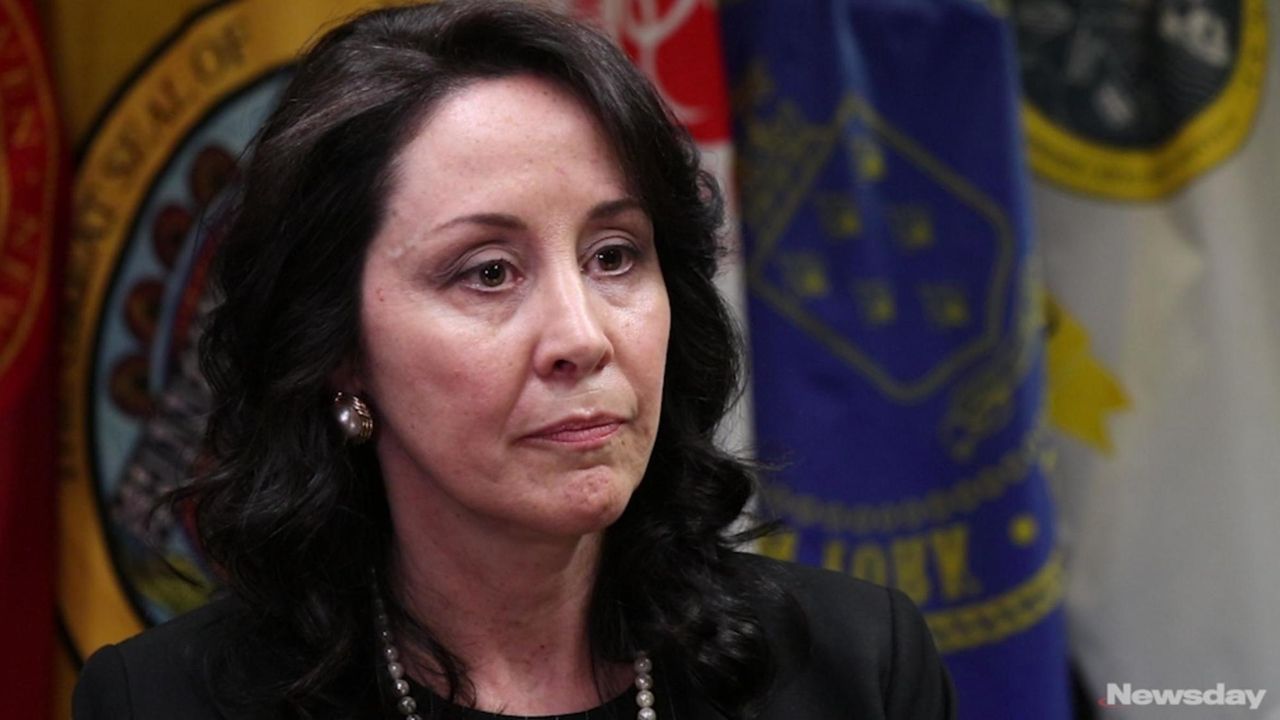 Hart, a 21-year-veteran of the FBI, would be the first woman to hold the commissioner post in the department’s 58-year history if approved by lawmakers, officials said.

“My main mission is to keep Suffolk County as safe as it can be to raise a family here, and to keep the priorities that are in place, which are stemming the tides of opioids, gangs, particularly MS-13 and of course any sort of active shooter, terrorist situation,” Hart said in an interview Wednesday.

Hart, 50, a Sea Cliff resident, will transition out of the FBI over the next two months and is expected to begin as acting police commissioner in mid-April when Bellone will forward her nomination to the Suffolk County Legislature.

Bellone said he chose Hart because of her long law enforcement career — specifically her experience heading the Long Island Gang Task Force, with its concentration on MS-13 — and the outsider perspective she’ll bring.

“Despite the fact that she’s worked closely with the Suffolk County Police Department, with our leadership team here, Chief of Department Stu Cameron, she still brings that outsider perspective to the department,” said Bellone. “She still brings a different take on things. And when you’re in the mix and you’re developing these crime-fighting strategies and policies — that perspective, I think, is a helpful thing.”

Hart’s salary will be $171,007, said Bellone spokesman Jason Elan. She was selected from a pool of more than 100 applicants, which Bellone said spanned the region, as well as the South and Midwest.

Bellone said he personally conducted more than 30 interviews of more than a dozen candidates — some in his office and others by phone and Skype.

Hart would take hold of the approximately 2,500-sworn officer department at a pivotal time. Though the county has experienced record crime lows, the MS-13 street gang has killed some 25 people on Long Island in the last two years, the majority in Suffolk. And the county is contending with an ever-deepening opioid crisis, which is projected to lead to more than 400 deaths in Suffolk last year.

DuWayne Gregory, presiding officer of the Suffolk Legislature, said he wasn’t familiar with Hart but was “excited” to get to know her and hear her vision for the department.

“It’s a new name to me but she seems to have an extensive career in law enforcement and certainly a bold pick in that it’s someone from the FBI,” said Gregory.

Legis. Robert Trotta (R-Fort Salonga) a fervent Bellone critic, said he worked with Hart when he was a police officer.

Hart, who joined the FBI in 1996, moved to the Long Island office in 2014, and worked on health-care fraud cases and organized crime, succeeds Timothy Sini, who was commissioner for about two years before being elected Suffolk County district attorney.

Hart said she applied for the commissioner’s job because she wanted to have a more direct impact on public safety on Long Island, saying, “On this level, I think you have a very strong impact on the day-to-day operations of people’s lives, to be frank. In the FBI, we have policy that’s pushed to us and we implement it. Here you are one on one with the community and you are in a position to do some very impactful things.”

Despite her more than two decades in the FBI, heading the Suffolk Police Department will bring her new challenges such as dealing with the powerful police labor unions, specifically the Police Benevolent Association, whose contract is up in 2019.

When Hart was asked how she would deal with the union, Bellone interrupted and said commissioners don’t typically get involved in labor contract negotiations.

But Hart did say: “As in all my relationships, I look for a healthy, open dialogue, and I intend to pursue that.”

Noel DiGerolamo, president of the Suffolk PBA, said: “I think that she brings a skill set to the organization that will be beneficial to not only the public but to our department. I look forward working with her in a collaborative manner.”

Bellone said Chief of Department Stuart Cameron, a 33-year-department veteran who has a working relationship with Hart, will stay on as the top uniformed member of the department. In the coming days, acting Commissioner John Barry, will transition to his job as the lead investigator in the district attorney’s office and Cameron will be acting commissioner until Hart arrives.

“She has a network of people and resources that is incredible,” said Bellone. “She can pick up the phone and call any law enforcement agency in this region and beyond and be able to talk to people she’s already worked with, that she knows, that she’s helped lead, and has done great work with. That is an incredible thing for us in the Suffolk County Police Department.

Hart headed the local FBI office during the investigation and prosecution of former Chief of Department James Burke on corruption charges. He is serving a 46-month term in federal prison for beating a suspect and covering it up. The county recently agreed to a $1.5 million civil settlement in connection with the beating.

Bellone said he didn’t only choose Hart because of her experience with the Burke case and other corruption cases, such as the probe into former Nassau County Executive Edward Mangano.

“The message here is Gerry Hart is an incredibly accomplished law enforcement professional, said Bellone. “If people get the message that we do not tolerate corruption as part of this selection, then I have no problem with that.”

Hart said she sought out the cooperation of Cameron and others despite how Burke shut down the department’s partnerships with the FBI and other federal law enforcement.

Bellone said Hart’s gender was “wasn’t at all” a factor in the history-making choice — she would be the first female commissioner since the department was established in 1960 — but instead her “breadth and depth of experience” impressed him.

Hart, a Northport native, said it was her lifelong dream to be an FBI agent.

“It sounds hokey but it was a fifth-grade field trip down to the FBI headquarters and I was hooked,” she said.

Hart said being the first woman commissioner wasn’t something she wanted to stress. “I just feel like I’m doing what I’ve always done, which is kind of to be myself and lead the way that comes naturally to me.”