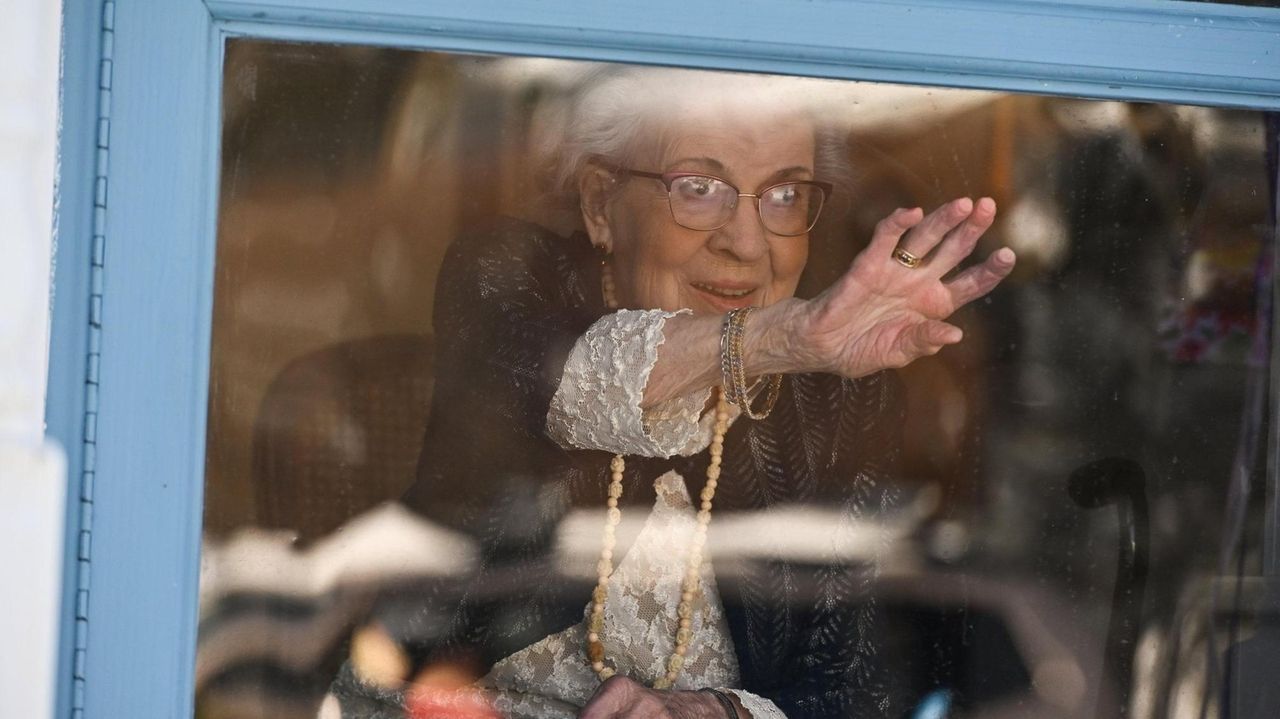 Friends, family and neighbors gathered outside in a drive-by parade to celebrate the 100th birthday of Alice Link of Huntington. Credit: Newsday / Steve Pfost

"I’m aiming for 118," Link said outside her Huntington home just before a line of vehicles festooned with ribbons, balloons and signs, some in English and Spanish, cruised past her home. "Because the oldest person who died in Japan was 117, so I figure I’ll aim for one more."

The drive-by tribute was a community affair featuring members of the Huntington Historical Society, retired teachers from the South Huntington School District, friends, neighbors and of course cake.

Town Supervisor Chad Lupinacci declared it was Alice Link Day in honor of the former foreign language teacher who worked in the South Huntington School District teaching Spanish and French for 20 years.

"We're very happy to celebrate Alice today " Lupinacci said. "We want to thank her for her contributions to the community."

Link was born in Boston in 1921, raised in France and returned to the U.S. with her parents due to the onset of World War II.

She moved to Huntington in 1946 where she and her husband had five children. The feisty centenarian attributes her longevity to an old adage.

"The old Greek saying, moderation in all things," Link said. "I love my drink, but I’m not going to give a whole bottle at a time."

Link studied interior design at the Parsons School of Interior Design in Manhattan but took a break to raise her family.

She returned to college when she was in her 40s, and received her bachelor’s degree, teaching certificate and Masters of Humanities degree from Hofstra University.

Justine Hughes of Greenlawn described her grandmother as a strong, loyal and amazing woman who has lived by her own motto: "never say I can’t because you can."

"She just keeps going and that’s her secret. She doesn’t want to stop," Hughes said.

Link was adopted, Hughes said, and was an only child so she always made her children a priority, returning to school at night and working by day after her divorce.

"She took a lot of people in, not just me. She just likes having people and family around. She just has a good heart, a giving soul."

After Link retired she tutored students in foreign languages, traveled extensively and volunteered as a docent for the Huntington Historical Society for over 30 years.