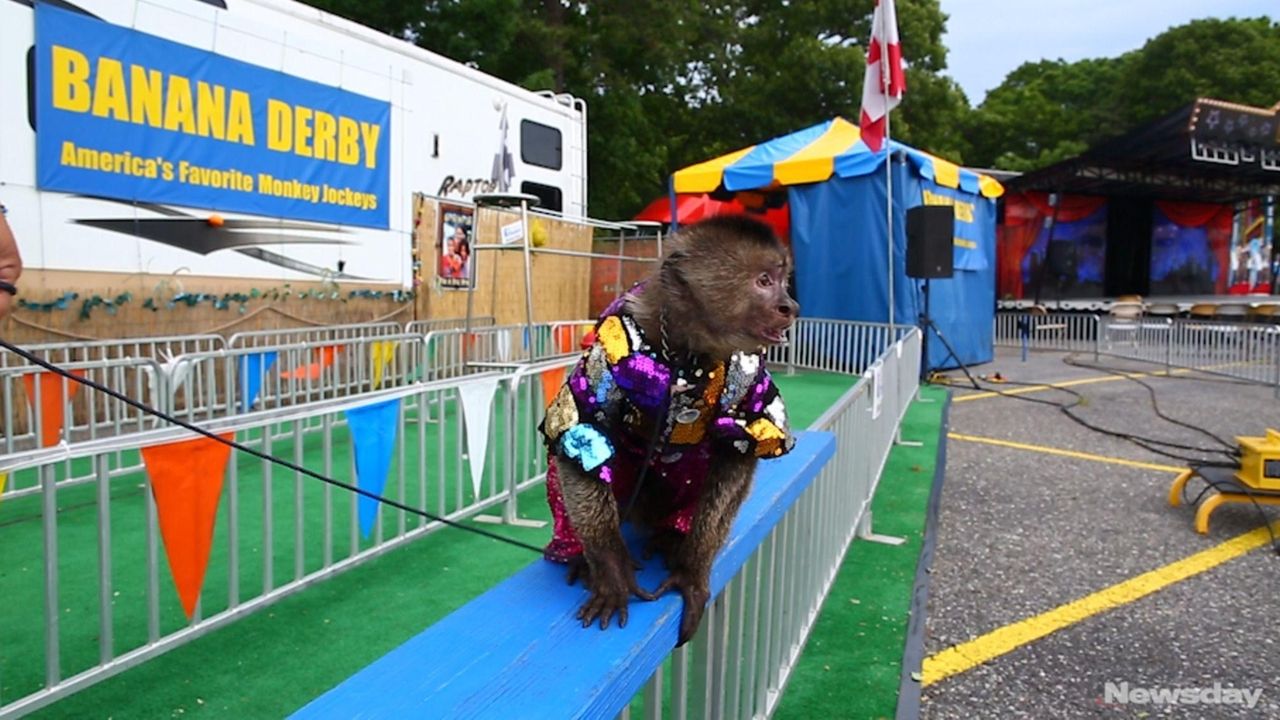 Protesters spoke out Wednesday, July 12, 2017 at the Northport Firemen's Fair which featured a carnival attraction known as the "Banana Derby," featuring capuchin monkeys dressed as jockeys secured to the backs of the dogs who race around a track.  Credit: Newsday / Christopher Ware

A carnival attraction featuring monkeys at the Northport Firemen’s Fair has drawn criticism from animal-rights activists, even as the proprietor of the act defends his treatment of the animals.

This year’s fair, running this week through Saturday, includes an act called the Banana Derby, a South Carolina-based show featuring trained dogs and monkeys that travel and perform at carnivals across the country.

A controversial portion of the show includes capuchin monkeys — dressed as jockeys — secured to the backs of the dogs, which then race around the track. The inclusion of the show in the fair has upset some members of the community and a group of protesters.

“We were not looking to upset anybody,” a fire department spokesman said. “Within the department, we decided we’re no longer going to hire any more animal acts.”

The Banana Derby show will go forward, however, for the rest of the fair.

Banana Derby’s owner and proprietor, Phil Hendricks, said in an interview his animals are happy and well cared for. He said his relationships with his monkeys in particular are just like any other pet and that protesters are part of a “vocal minority.”

Critics “should see it for themselves, they’re like our family members,” said Hendricks, 54, a former lawyer.

Banana Derby has faced backlash from animal-welfare groups at a number of fairs across the country, including at the Brookhaven Fair in June.

“While we support the fire department, we don’t support the barbaric animal acts they’re hosting,” said John Di Leonardo, president of activist group Long Island Orchestrating for Nature. “There are more humane ways to raise money than tethering monkeys to dogs.” Di Leonardo and other LION members have reached out to the fire department and protested with signs at the fair each night.

The fire department said it contracted a ride company to provide rides and entertainment. The department had previously been provided with acts like magicians and was unaware of the nature of Banana Derby until it was too late to change the lineup, it said.

The ride company did not respond to multiple requests for comment.

Erika Fleury, program director for the North American Primate Sanctuary Alliance, which has previously attempted to dissuade fairs from working with Banana Derby and similar acts, said such attractions present safety issues, especially because children and audience members often pose with the monkeys.

“These are wild animals that cannot be domesticated,” she said. “They can bite, they can scratch, they can pull hair.”

Tuesday night’s 7:30 p.m. show was interrupted by rain, but some fair spectators said they weren’t bothered by the Banana Derby.

“You don’t know what’s going on behind the scenes,” said Danielle Wood, 35, of Wading River. “These kind of acts, they can take care of their animals.”