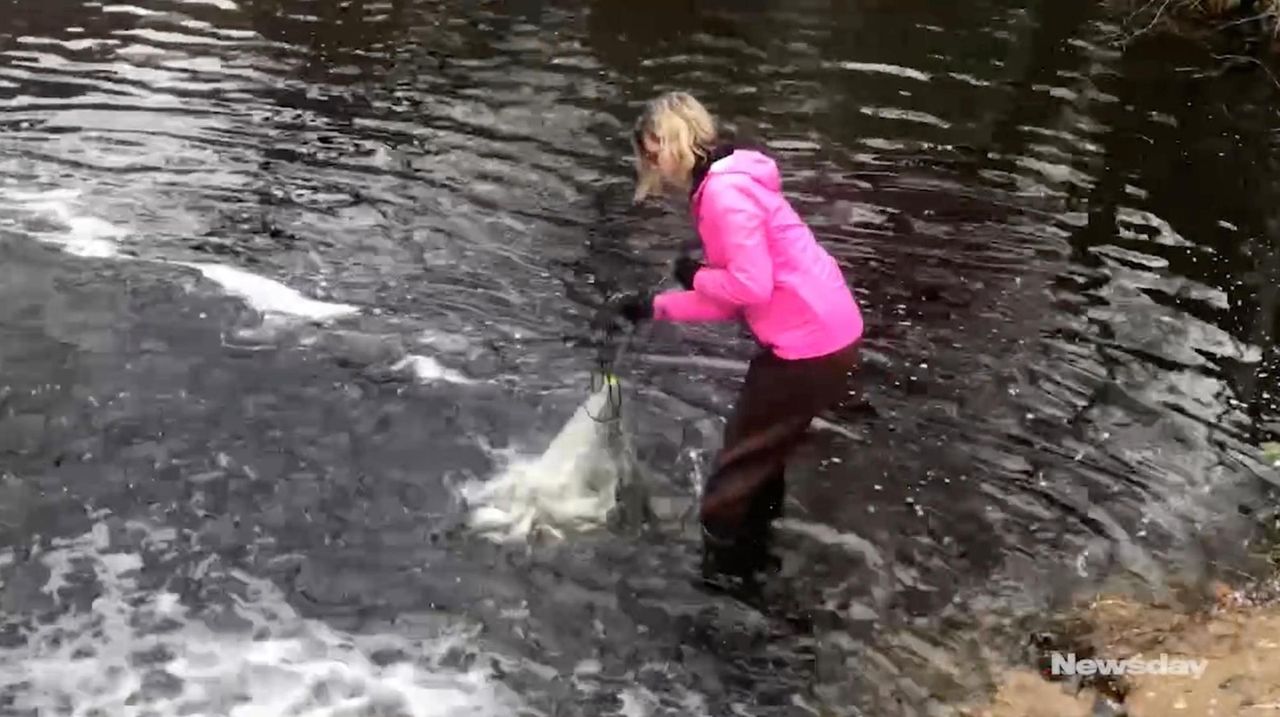 Conservationists helping alewives over Woodhull Dam in Riverhead on Thursday prepared for a new fish ladder for the 2020 season. Credit: Newsday / Mark Harrington

Conservationist Byron Young’s days as biological matchmaker for alewives in the Cranberry Bog preserve in Riverhead may come to a welcome conclusion this spring as Suffolk County and the state prepare to build a fish ladder at a man-made dam that has kept the baitfish from their natural spawning grounds.

For the past decade, Young, a retired Department of Environmental Conservation biologist, has spent several days each week from March to May netting thousands of alewives from a pool below the dam, to measure and count the vital baitfish before physically carrying them over Woodhull Dam and into an adjacent pond. From there they can travel south as far as Wildwood Lake, less than a mile away.

This spring is expected to mark the last time Young, 73, of Ridge, will need to give an assist to these fish. The state DEC and Suffolk County, working with the Peconic Estuary Program, have approved and funded a $400,000 plan to build the fish ladder at a northern section of Cranberry Bog Preserve. It will allow the fish to reach the spawning grounds on their own. "This should be the last herring toss over the dam," Young said.

Despite the impediment of Woodhull Dam, Young said the alewife population is thriving.

On a cloudy morning last week, Young worked with Peconic Estuary interns Ali Andrescavage and Stephen Havens to net and catalog the fish. The alewives gather by the thousands in the pool below the dam, where they are easy prey for osprey, herons and egrets. The weighted net descends a few feet into the pool, gathers at its base as it’s hauled in, and is retrieved with a few dozen fish around seven inches long.

Sarah Schaefer, environmental analyst for Suffolk Country and Peconic Estuary Program coordinator, said augmenting the Woodhull dam with a fish ladder is one of several remaining projects aimed at removing impediments to spawning alewives and help the species flourish.

“They will have access to 95 acres of fresh water habitat, up to Wildwood Lake,” Schaefer said of the immediate project. In coming months and years, the plan is to restore up to 300 acres of fresh water habitat, including another fish passage on the Peconic River west of a fish ladder that was installed beside a main roadway in Riverhead a decade ago.

Another project will involve clearing impediments in and around the Upper Mills Dam, across from the Snowflake Ice Cream shop in Riverhead and another at the Forge Road Dam.

“It’s taken years, decades almost, to get where we are now,” Schaefer said.