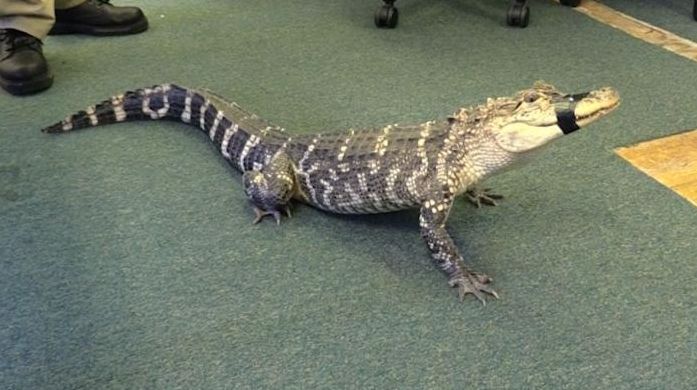 The Suffolk County SPCA said on Monday Dec. 4, 2017, it has seized a 4-foot-long alligator from a Ronkonkoma home. The alligator will be placed with a sanctuary in Massachusetts, SPCA officials said. Credit: James Carbone

The Suffolk County SPCA said Monday it has seized a 4-foot-long alligator from a Ronkonkoma home.

The seizure on Friday serves as a reminder that owning an exotic reptile might make for a good children’s book, like “The House on East 88th Street” about Lyle the crocodile living in a bathtub, but in reality it is not a good idea.

“In real life it’s an accident waiting to happen,” said Suffolk County SPCA chief Roy Gross. “Alligators do not make good pets and are illegal to own without a license.”

And yes, it not only is illegal and unsafe to own an alligator, but crocodiles, too.

“There’s a reason why they’re illegal,” Gross said. “They’re dangerous. Not only could you be bitten, harmed or killed. But, there’s also disease, like salmonella.”

The SPCA said the seizure, which also involved the state Department of Environmental Conservation, occurred after officers were called to the scene by Suffolk County police, who were there on what Gross called “an unrelated matter.” Authorities did not identify the owner or release the location of the home.

The alligator will be placed with a sanctuary in Massachusetts, Gross said.

Gross said the SCPA has held two amnesty day surrender drives within the past year and reminded anyone who owns an illegal reptile that both the SPCA and DEC have a policy that provides amnesty to anyone who calls them proactively to arrange to surrender that illegal pet.

Unfortunately, though, he said, not many owners do that.

In fact, he said, just last year authorities confiscated a 6-foot-long alligator from a yard in Medford.