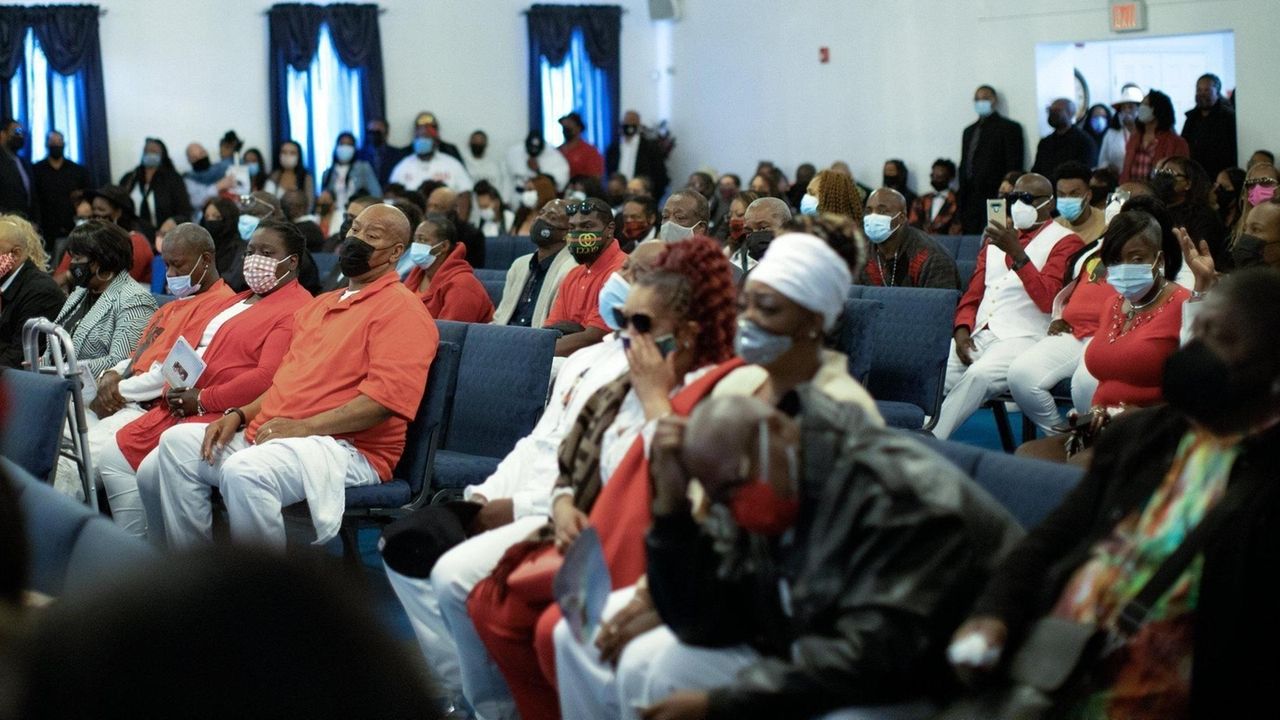 Friends and family of Alvin Toney, a well-known music producer and youth football coach, honored and remembered him at his funeral at a West Babylon church on Saturday. Newsday's Steve Langford reports. Credit: Kendall Rodriguez

As mourners laughed, cried and hugged each other outside a West Babylon church, friends and family of Alvin Toney said Saturday after his funeral that the well-known music producer and youth football coach had a big heart and touched many lives for the better.

More than 100 cars were parked around the In the Word Ministries church on Gordon Avenue just before 10 a.m. as mourners at Toney’s funeral trickled into the building, which was closed at times to allow for spacing between groups due to COVID-19 concerns.

Toney died unexpectedly April 8 at his home in Wyandanch. He was 54.

Toney’s obituary, read by Jordyn Evans-Toney, one of Toney’s nine children, remembered him as a hometown hero whose love of music was matched only by his love of youth sports.

"He was a master at coaching people to greatness. He saw greatness in all and made each person feel that their existence mattered," Evans-Toney said during the service.

Marvin Toney, a cousin of Alvin Toney, said Alvin loved his family and community and wanted to see local youths do well, which was a driving force when Toney coached youth sports and introduced them to successful athletes as inspiration.

"He guided a lot of us off the streets into sports and kept us busy. He didn’t care about the fame of the sports, he just wanted us to know that there’s a way out, and you can play sports, but you have to also be smart to be a college athlete," Marvin Toney said after service.

Joseph Charles Amendola, 49, of Uniondale, aka "Charlie Hustle," who cofounded Prime Time Music with Toney, credited Toney for getting him into the music business years ago.

"He invited me to start the label. It was the biggest honor of my life working with him on the music and getting to know his whole family," Amendola said.

Toney is credited with discovering the late Long Island rapper Craig Mack. Toney produced Mack's 1994 platinum hit "Flava In Ya Ear," which was nominated for a Grammy Award.

Barry L. Baker Jr., 40, of Wyandanch, first met Toney in his childhood through youth football and had known him for roughly 30 years. Baker said Toney was a "great role model, great mentor and a good man" who was a father figure for kids who needed one.

Baker smiled as he recalled receiving the Hansen Award for outstanding football player in Suffolk County in 1998 during a ceremony when he played for North Babylon High School. Toney was in attendance and shed tears of joy over Baker’s accolade.

"He was that kind of person. He had all the love in the world, that’s what he was about. He had the biggest heart ever. That was his forte," Baker said.

Alvin Toney, music producer and youth football coach, dies at 54Toney was remembered for his generosity in mentoring hip-hop recording artists and also for working with young athletes as a longtime youth football coach in his Wyandanch hometown and beyond.