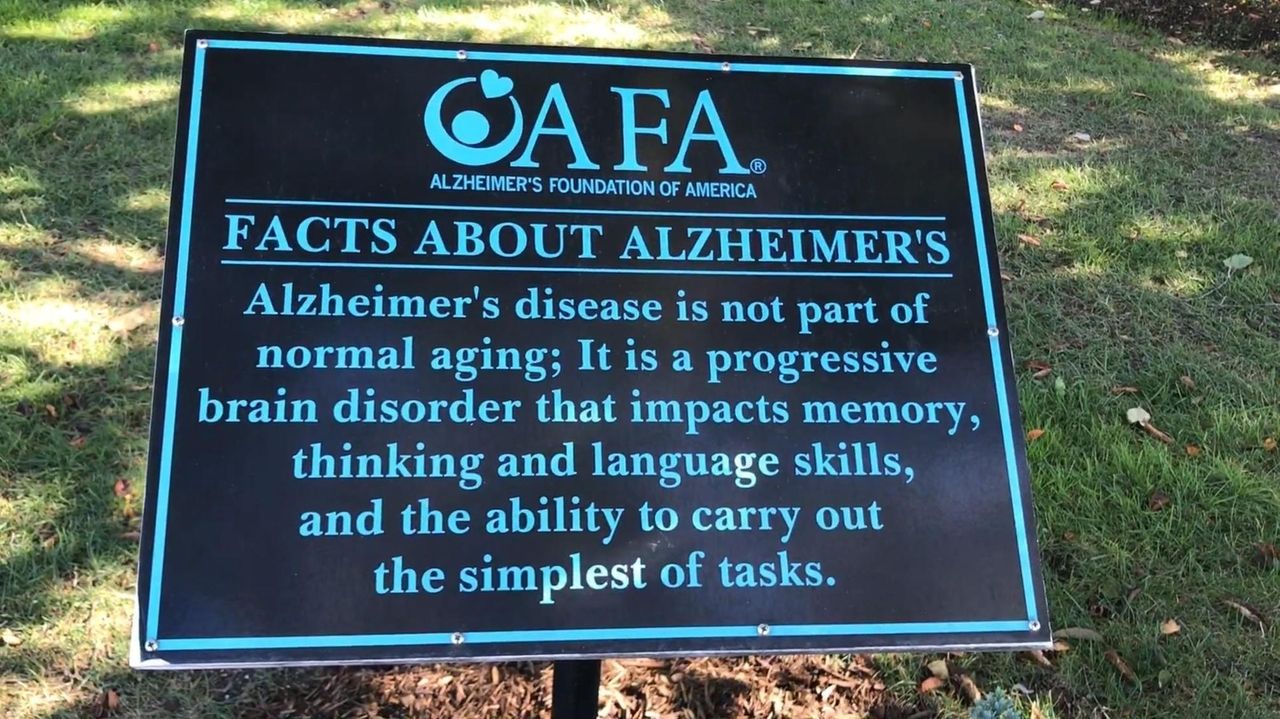 A fundraising walk for the Alzheimer’s Foundation of America in Lindenhurst on Oct. 19, 2019 took place at what AFA officials said was the nation’s first park for people with Alzheimer’s and their caregivers. It opened Nov. 2, 2017.  Credit: Newsday / David Olson

Like many people with Alzheimer’s disease, the late Yolanda Arredondo regularly became agitated or anxious.

Not when she visited a Lindenhurst park designed for people with Alzheimer’s and their caregivers, said Arredondo’s daughter, Gloria Padilla.

“She was very happy,” Padilla said in Spanish. “She really liked the tranquility.”

Padilla, 61, of Lindenhurst, was one of more than 100 people Saturday who participated in a “Walk in the Park” to raise money for the Manhattan-based Alzheimer’s Foundation of America, which opened the park nearly two years ago with the Town of Babylon. The quarter-acre Respite Care Relief Park sits within Babylon Town Hall Park.

It is the first in the country and serves as a model for parks being planned for Sunset Park in Port Washington, Manhattan, Westchester County, Rochester and Nashville, said foundation president and CEO Charles Fuschillo Jr. The foundation paid for the Babylon park; town employees built it and maintain it.

“The whole purpose of the park is for individuals to come here and relax, whether it’s a caregiver to take a moment to de-stress — it’s so critically important they avoid caregiver burnout — but also for the individual with the disease,” Fuschillo said. “We want them to come here and have a calm setting.”

The park features a winding brick walkway lined with flowers, evergreens and herbs leading to a white gazebo.

The flowers provide a calming influence and stimulate memories, as can the scent of the mint, oregano and other herbs, said Fuschillo, a former state senator from the South Shore.

USB ports inside the gazebo allow caregivers to connect smartphones and MP3 players to play music, which also can stimulate memories. Key areas of the brain associated with memory of music are relatively undamaged by Alzheimer’s, according to the Mayo Clinic.

Dotted throughout the park are signs that have tips for managing caregiver stress, a list of therapeutic activities for people with Alzheimer’s and other facts about the disease, along with a phone number to connect with resources.

About 5.8 million Americans are living with Alzheimer’s disease, and one in three seniors dies of Alzheimer’s or another dementia, according to the Chicago-based Alzheimer’s Association.

The park is next to a fenced-in playground, so caregivers can bring extended families, and to a veterans memorial, which resonates with people with Alzheimer’s who are veterans, said Town Clerk Geraldine Compitello, who oversaw planning and construction of the park. It sits beside a large pond.

Padilla recalled how her mother, of Valley Stream, who died at age 80 on April 24, enjoyed watching the water and the geese that sometimes glided along the surface.

“We saw how relaxed she was,” Padilla said.

That was a contrast to the aggressiveness and anxiousness her mom had sometimes started exhibiting about 10 years ago, when Padilla and her sisters noticed the sharp mood changes and extreme forgetfulness that are classic signs of Alzheimer’s and other forms of dementia. Padilla said her mother had never been aggressive until the disease began taking its toll.

Especially difficult was when her mother forgot who she was, Padilla said. Sometimes she would have moments when she would remember details about her family, but that was agonizing in its own way, because she had a flash of recognition that something was wrong with her mind.

“She would ask what was happening to her,” Padilla said, her eyes tearing up. “It’s a very cruel disease.”

Susan Esposito, 66, of Lindenhurst, recalled similar mood and memory changes with her mother, Angelina Zippilli, who died in September 2017 at age 89.

She had been a beautiful, vibrant woman who always offered to help others and “she turned into this little old lady who didn’t even know who she was,” Esposito said. “To see that happen to her — it’s heartbreaking, absolutely heartbreaking.”

Zippilli enjoyed the water and greenery of Town Hall Park but died before the Alzheimer’s section opened.

“She would have loved it here,” Esposito said — especially the flowers, because she had been an avid gardener.

Lynn Hansen, 60, of West Babylon, visits the park two or three times a week. Her mother, Nancy Marchese, 85, has advanced Alzheimer’s and cannot leave her West Babylon nursing and rehabilitation center because of mobility problems.

Hansen said the park is a quiet oasis where she has time alone to reflect.

“Sometimes it just becomes so overwhelming, just the thought of what she’s going through, what I can’t do for her, what I try to do for her,” she said. “You need a calming space that’s away from your normal existence, away from it all.”