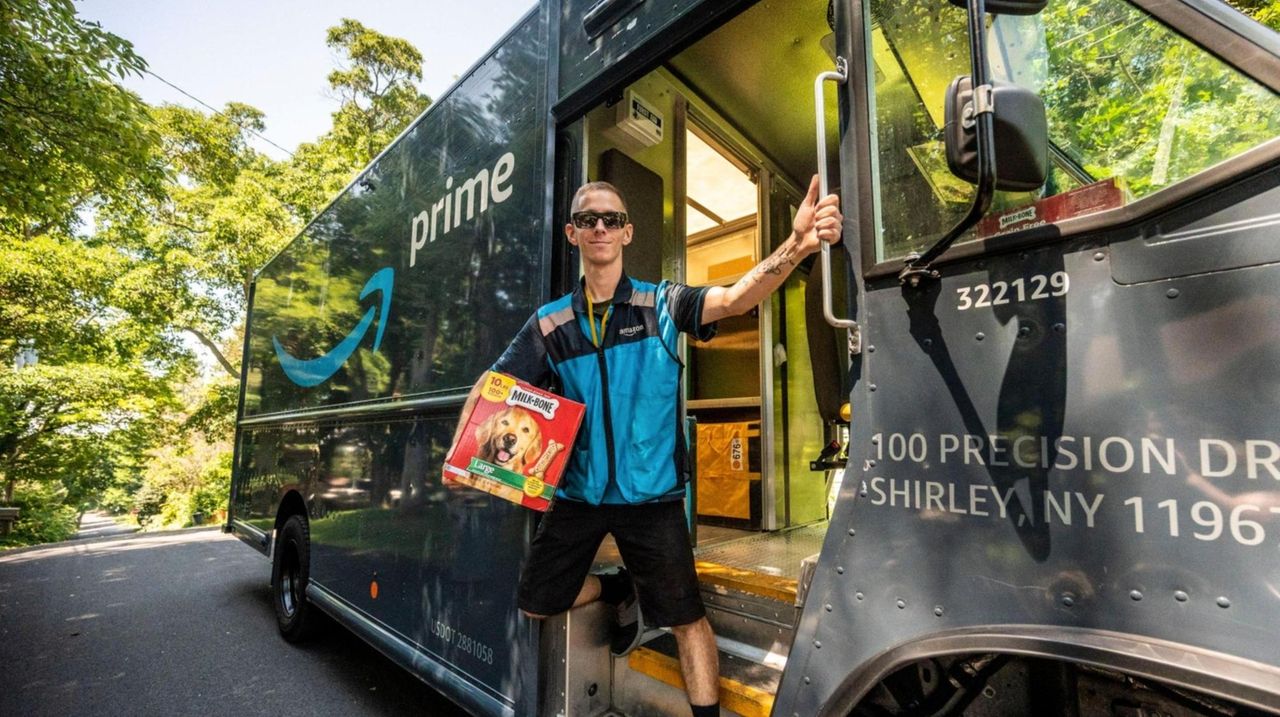 Joseph Sammarco, 22, of Mastic Beach, delivers treats along with the packages to his Amazon customers who have dogs.  Credit: Newsday / Alejandra Villa Loarca

The mystery of the Ronkonkoma dog-bone Santa has been solved.

For months, pet owners in the community have been finding Milk-Bones on top of the packages delivered to their homes.

Some people have glimpsed the benefactor on their front-door video cameras, but he’s gone too fast to thank him. "He’s like a phantom," said Maria Bolkas, 53, a fertility specialist who has two English springer spaniels, Jackie and Mitso.

But this week, he was nabbed.

"It became a mission," joked Christine Naccarato-Haynes, 51. "The whole neighborhood is stalking him. Finally, I see him, I jump outside. I’m like ‘You’re the bone guy!' "

Turns out that "bone guy" is Joseph Sammarco, 22, of Mastic Beach, who is often assigned the Ronkonkoma delivery route for Amazon. Naccarato-Haynes, who has a rescue dog named Josie, posted a photo on Thursday of Sammarco holding a dog biscuit on a Ronkonkoma Facebook page, and it’s gotten more than 300 likes and 160 comments.

"I’ve been dying to know who it was," wrote one. "My dog loves him, but he’s always gone by the time I get to the door," wrote another. "Omg, I was like am I going crazy?! Where are these coming from," wrote a third.

Sammarco has been working for Let’s Talk Logistics, which delivers for Amazon, for about six months, and said he’s "kind of overwhelmed" by the attention he’s getting. He confessed his handouts began with a degree of self-interest.

"The bones kind of started with the inherent danger of the job with dogs," he said. He added he thought if the dogs, who see his arrival through the windows or doors of the house, associated him with the bones he sets on top of the packages, they would learn to like him. "After a few weeks, instead of the dog going to the door with an ‘I’m going to kill you’ in their bark, they say, ‘Hey, I’m getting a treat.’ Six months later they’re wagging their tails so hard."

But the caper turned into something that makes Sammarco feel good, too. "I wanted to be as mysterious as possible doing this random act of kindness," he said.

He keeps the red box of Milk-Bones in the window of his blue Amazon delivery truck, puts a few in his pocket, and leaves one at any house where he hears a barking dog. He does this on other routes as well, though Ronkonkoma has been his most consistent target. Once in a while, Sammarco will also buy a rawhide bone and hand it out to one dog as a bonus.

Maria Gillen, 27, a Ronkonkoma nurse, said she was initially concerned about feeding her pet a dog biscuit left on her doorstep. "At first you get a little worried because you think, ‘What is this?’" she said. But Harley, her boxer-shepherd mix, has received about eight or nine more biscuits since.

"I think all the dogs now know him and get excited when a package is arriving because they get their own special little treat too," said Jaimee Martin, 32, who works with disabled adults and has a poodle-shih tzu mix named Maddie.

"Does he even realize the impact he is having just with something so simple, I wonder?" Bolkas said. "I know he probably doesn’t see us smiling, but it’s kind of like when people pay it forward for you at 7-Eleven. I just see the doggy treat and I know someone who actually cares about humanity is delivering my packages."