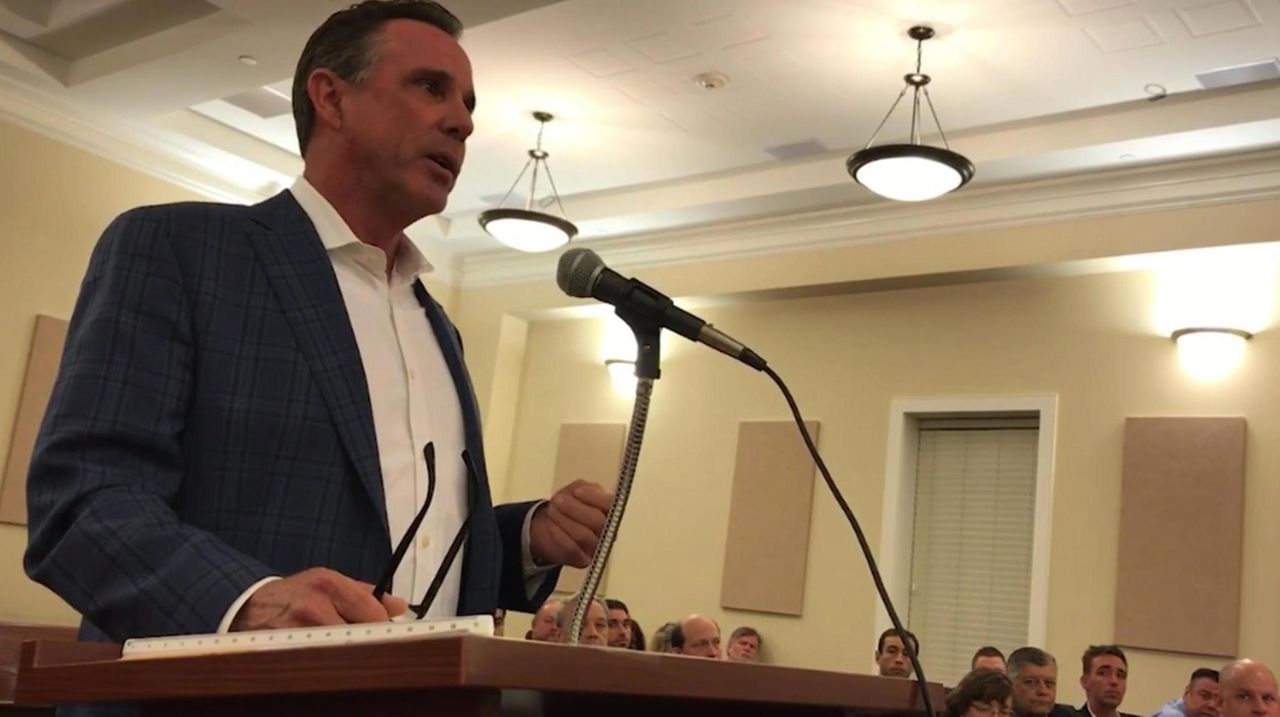 The Village of Amityville held three back-to-back public hearings on Monday, all related to a proposal to create a transit-oriented zone.

The hearings were on the zone, a draft generic environmental impact statement on the zone and a proposed complex of 115 luxury rental units, and a request for rezoning by complex developer GreenTek/R & S Realty Corp.

At the hearings, several commenters spoke passionately on various aspects of the proposed zone and apartments.

Some neighbors of the proposed zone said they had only learned of the hearings from a Newsday article and were upset they hadn’t received notices from the village. Mayor Dennis Siry said anyone within 200 feet of the zone should have received notice.

“I’m just concerned about the proliferation of very high, very dense buildings,” said Bay Village Civic Association president Joan Donnison. Like several others at the meeting, Donnison was troubled by the proposed parking: 138 spaces for 38 studios, 65 one-bedrooms and 12 two-bedrooms.

The draft environmental impact statement notes transit-oriented developments often use low parking ratios because many residents forgo owning a vehicle when they have convenient access to transit.

“I just don’t buy it,” said resident Janet Colletti. “Not everybody rides a bicycle, not everybody takes the bus.”

Tom Howard, co-chair of the village’s downtown revitalization committee, said he used to have similar beliefs.

“It’s taken me five years of listening to all the experts tell me that in reality most of the young people today are not using cars anymore,” he said. “They use their Ubers, they use all the other things that we don’t use. We don’t use that stuff and we don’t comprehend it, but that’s exactly what’s happening right now.”

GreenTek meets the requirements of the proposed zone: its property is within the parameters, is zoned for industrial use and exceeds 1.5 acres. Under zone requirements, buildings constructed cannot be more than 38 feet tall, and the maximum density for units would be 35 per acre.

For certain incentives from the developer, the proposed zone permits the board of trustees to allow building heights up to 48 feet and a density up to 48 units per acre. GreenTek is seeking both, offering more than a half dozen incentives, including preserving a 19th century building on site, creating a pedestrian path from the train station to the downtown and giving the village a 20-year annual payment of $36,000.

Comments on the zone and complex can be submitted through April 19 to Village Clerk-Treasurer Catherine Murdock by email or letter.