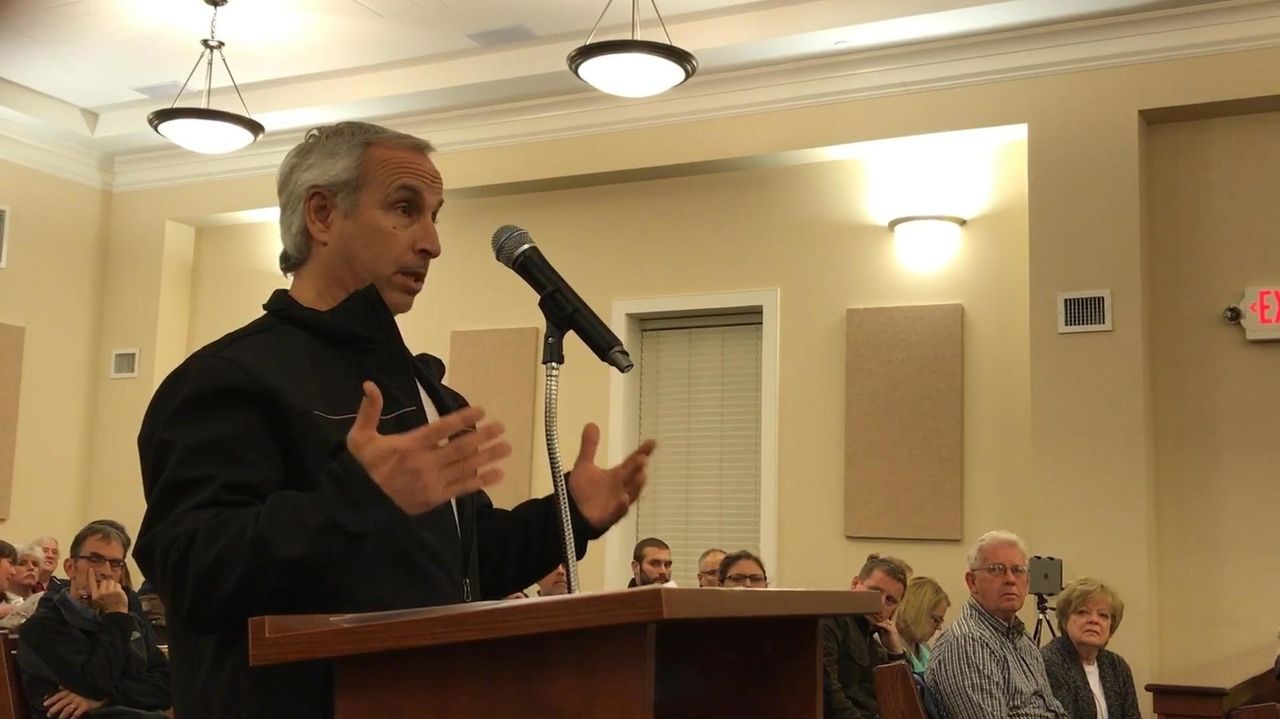 Robert Glaser talked at an Amityville Village public hearing about being denied a use variance for a two-family home in the village. Credit: Newsday / Denise M. Bonilla

The Amityville Village board of trustees on Monday night voted to amend the village’s two-family house code, reversing a change it made three years ago about owner-occupancy.

Amityville has dozens of homes with a certificate of occupancy specific to being two-family that predates the village code and are not subject to renewal. Other two-family homes are renewed by special exceptions, which carry expiration dates ranging from one to three years. Upon expiration, the properties are reviewed by the village’s zoning board of appeals and a public hearing is held. Village officials estimate there are 48 two-family homes with those special exceptions.

The 2015 code required that the special exception end upon the sale of the house and that the new owner obtain a use variance, which officials said has strict requirements that are difficult to meet.

Babylon Town’s other villages have different methods of dealing with houses that do not have a two-family certificate of occupancy. Lindenhurst, which has about 1,300 such houses, requires the two-family homes be owner-occupied. A review board inspects and reviews the houses every four years, including holding a public hearing. Babylon Village, with 18 two-family homes, does not require owner occupancy but applicants must prove hardship requiring separate units. Its three-year permits are subject to review and public hearing.

The Amityville 3-2 vote came after a public hearing that lasted more than an hour. Much of the hearing’s discussion revolved around village officials’ acknowledged difficulty enforcing the property maintenance code with absentee landlords.

“These landlords collect rent and they make zero improvements,” said resident Janet Colletti. “They are taking my property values down.”

Amityville real estate broker Jerry O’Neill told the board that two-family homes do not hurt property values if they are well-maintained, just as with one-family homes. Houses that were two-family dwellings that under the 2015 law would have to be sold as one-family could lose 25 percent of their value, he said.

Village attorney Bruce Kennedy said he was concerned the 2015 amendment left the village vulnerable to litigation over two-family homeowners’ adversely impacted property values and said the village has already received a letter threatening a lawsuit.

Trustee Nick LaLota said he agreed that the 2015 amendment is “unfair to law abiding property owners,” but asked to delay the vote on the amendment “to see if we could implement some stronger enforcement laws.”

Mayor Dennis Siry pushed forward, saying that the village has “a lot of mechanisms that we actually can use, it’s just a matter of getting out there and enforcing them.”