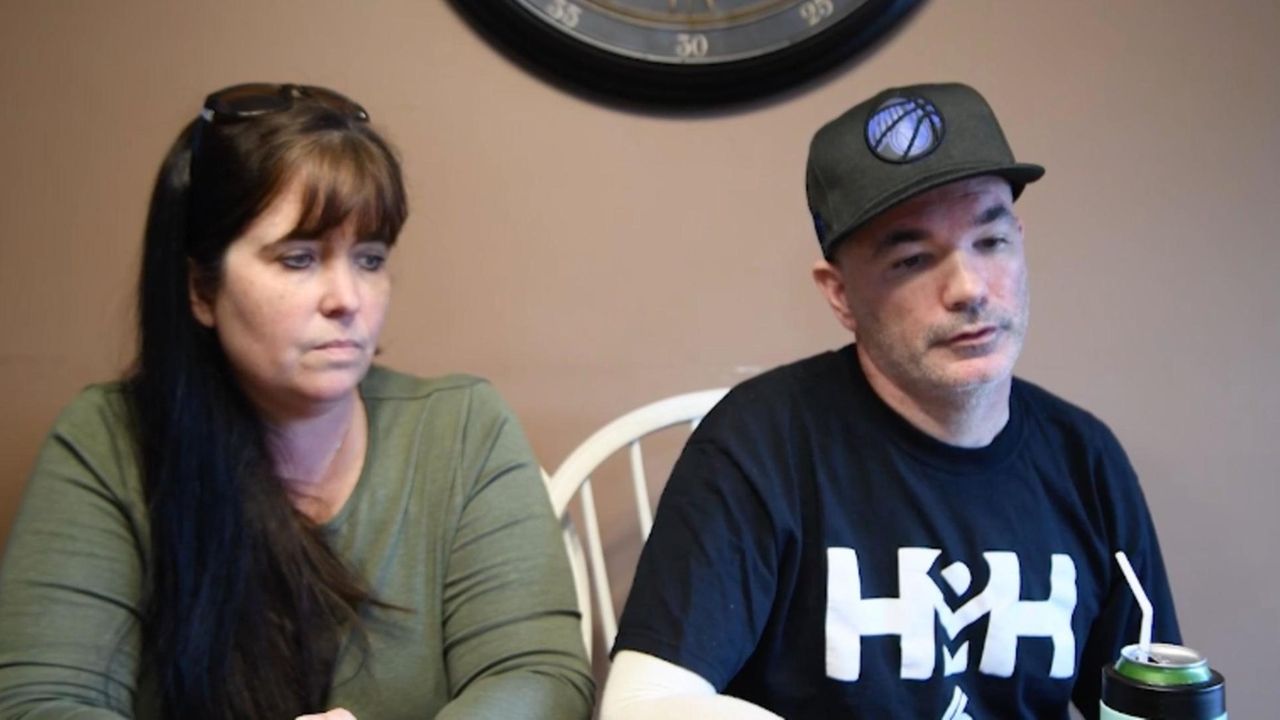 Former Amtrak worker Robert Zimmerman, of Ronkonkoma, talks on Friday about his recovery from a devastating accident: He had been making repairs near Track 12 at Penn Station on Jan. 11 when he came into contact with a live wire that blasted him with 12,000 volts. He was released from hospital  after 12 surgeries -- both hands were amputated, as was most of his left arm. And a toe. "I was just thankful to be alive," he said. Credit: Newsday / J. Conrad Williams

Robert Zimmerman came to his senses screaming. His arms felt locked in place and he remembers that the pain coursing throughout his body was unbearable.

The Amtrak worker had been making repairs near Track 12 at Penn Station on Jan. 11 when he came into contact with a live wire that blasted him with 12,000 volts. He recalls the sight of his foreman desperately shaking him.

The next two months were a painkiller-infused blur of 12 surgeries, many to remove more and more tissue damaged beyond repair. Both hands were amputated, as was most of his left arm. And a toe.

“I was just thankful to be alive,” said Zimmerman, speaking in an interview Friday, recalling his ordeal, taking stock of his life ahead and of the support he’s received from family and friends.

“I’m starting to eat a little bit better now, and starting to sleep, although that’s hard for me.”

Zimmerman, 45, is back in his tan ranch-style home in Ronkonkoma. That, in itself, is a huge step forward for a man who’s survived the type of accident that often kills.

Now, the daily battles he had fought in the hospital — beating back infection, keeping his blood pressure down, controlling the pain — are taking a back seat to more everyday issues of taking a shower, changing the television channel, or even just opening the refrigerator door.

“I have to rely on other people, to humble myself and be patient,” Zimmerman said.

That’s not easy for a man described by friends and family as proud, tough and far more comfortable giving help than receiving it.

His wife, Christine, and their three sons have rallied to his side. And the man who has given so much to the Ronkonkoma community — serving as a volunteer firefighter and coaching boys baseball, football and basketball — is now seeing that community come through for him. People provide the Zimmermans a dinner almost every night.

When Zimmerman was in the hospital, there were weeks when each day seemed like a miracle: The day he went into kidney failure. The day his blood pressure went up to 224 over 209, miles above the standard of 120/80.

Christine Zimmerman recalled the day she had to sign the papers allowing surgeons to remove her husband’s hands.

“No, you can’t have them,” she remembered telling the medical team, and proceeded to throw a fit. When the doctors told her that her husband’s hands were so damaged that they were poisoning his body, she acquiesced.

When Zimmerman regained consciousness after that surgery, he had the strength to mouth only a few words to his wife.

Then there was the day Zimmerman’s heart stopped, right in front of his teenage son, Joseph. His mother threw Joseph out of the room and started screaming and banging on her husband’s chest, until the doctors and nurses removed her and brought him back.

Make no mistake, these are still rough days for the Navy veteran. One of his doctors explained some of the damage and challenges he faces. When Zimmerman came in contact with the high voltage wire, the force of it virtually destroyed his hands and left severe wounds where the electricity exited his side and foot, said Dr. Palmer Bessey, a surgeon at the burn center at NewYork-Presbyterian/Weill Cornell Medical Center in Manhattan, where Zimmerman stayed.

Now that Zimmerman has come to understand he will not die, he is beginning to comprehend what his injuries mean to the rest of his life, the doctor said.

“He’s a little down,” Bessey said. “He has to relearn everything, how to live again.”

How can I hug my wife?

How can I play catch with my son?

Before his injury, Zimmerman was a husky, robust man of 200 pounds who swam a mile almost every day. He loved to play sports with his sons. Now, he’s lost 30 pounds and, sitting at his dining room table Friday, his voice sounded thin and he looked fatigued.

His volunteer firefighter buddies from the Lakeland department are lending a helping hand — and a good dose of optimism.

Garrett Hallock, who served with Zimmerman on the fire department until about a year ago, said his friend’s history in the military and firefighting has prepared him for the struggles ahead.

“He’s one of the strongest people I know,” said Hallock, 48. “In my opinion, he’s taking every day as a challenge. Everything you take for granted, like brushing your teeth, is a new challenge for him.”

A few days ago Hallock, along with firefighter Eric Collazo, installed an Amazon Echo in the house, so that Zimmerman can now make phone calls, change the TV channel and control the temperature just using his voice.

Collazo also fashioned a device that helps Zimmerman open doors and eat his food. The Zimmermans have only started looking into obtaining prosthetics.

The family has health insurance and the community has started a GoFundMe page that has raised m more than $47,000. That will help the family redo their bathroom and kitchen to accommodate him.

Still, as one would imagine, this has all been very tough on the household. Christine Zimmerman has remained the rock of the family, but she acknowledges her anxieties.

“I’m afraid all the time to leave the house, afraid to leave him,” she said.

Anthony acknowledged that he and his father had strained relations before the accident.

Andrew, the eldest, helps in a very specific way. His father often feels phantom pain in his missing hands. He feels as if his fists are tightly clenched.

So Andrew stands in front of him holding something, like a TV remote. His father imagines that his hands are reaching out for the remote and taking them. And that seems to bring him a measure of relief.

Zimmerman, for his part, says he will find a way.

“If I can get prosthetics and get to use them as normal hands, that’s what I’m looking for,” he said. “I’m determined to get to that next step and do things myself. Day by day, I’m going to keep figuring it out.”

Amtrak worker who lost hands fights to go homeA Ronkonkoma volunteer firefighter and Navy veteran is fighting life-threatening injuries, including the amputation of ...