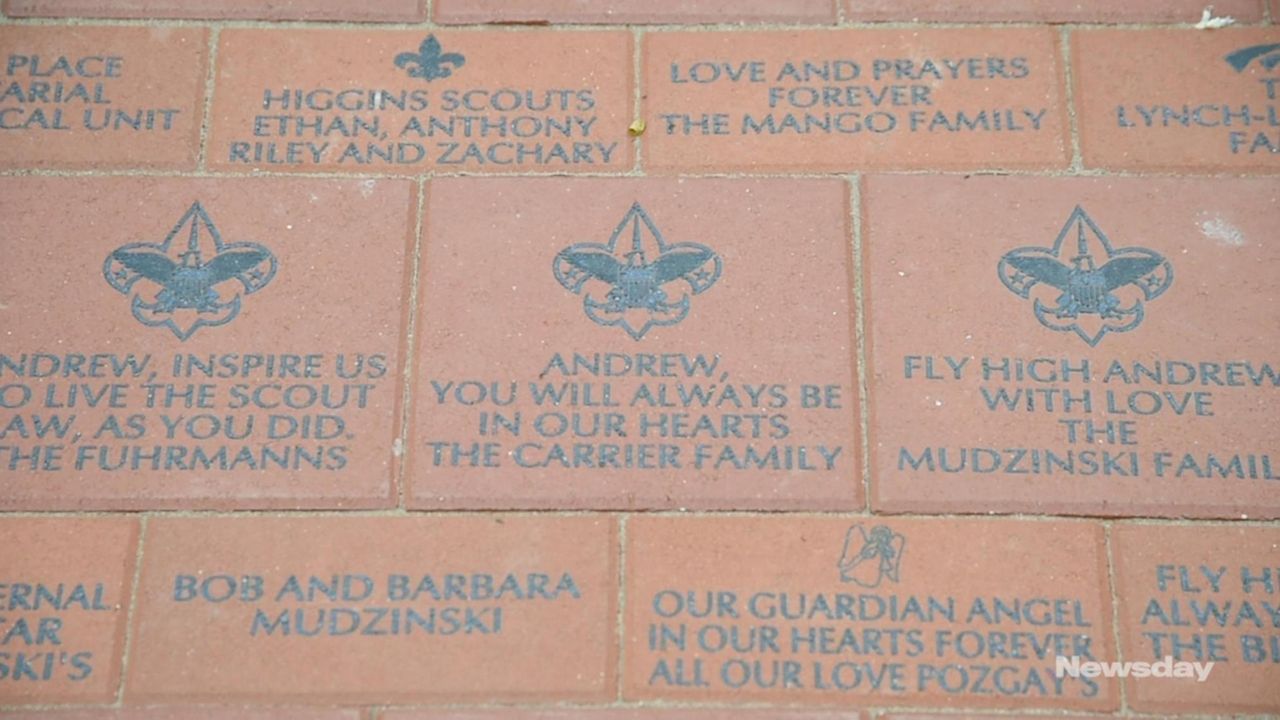 For his Eagle Scout project, Joe Pozgay, 16, decided to create a brick garden in Shoreham to honor Andrew McMorris, a fellow Boy Scout who was struck and killed by an alleged drunken driver. The garden was dedicated on Wednesday. Credit: Newsday / Thomas A. Ferrara

John McMorris, his voice cracking at times, spoke Wednesday of the lifting of grief as he dedicated a rock garden in memory of his son, 12-year-old Andrew, killed when an accused drunken driver plowed into him and his troop of Boy Scouts.

"When my family and I saw it for the first time, our breath was taken away," he told friends and Boy Scouts at the Robert E. Reid Sr. Recreation Center in Shoreham, Troop 161's home. "For the first time in a long time, our hearts smiled."

Then as a Scout bugler played taps, Andrew's mother pointed upward with a quick smile.

There was the sign Alisa McMorris had been looking for — a jetliner flying through the clouds — and attendees at the ceremony started videotaping because they all knew Andrew had wanted to be a pilot. Not long before he died, the seventh-grader from Wading River had learned how to fly a Cessna, going from MacArthur Airport in Islip to Hartford, Connecticut.

"I was saying, 'Where's my plane? Come on Andrew, you always give me a plane,' " the boy's mother said to a friend at the dedication.

About 150 people attended Wednesday evening, along with officials, including Brookhaven Town Supervisor Edward P. Romaine. They laid rocks bearing messages and painted the color of a red Ferrari — Andrew's favorite car — inside the outline of a ribbon, the symbol of Mothers Against Drunk Driving. Bricks on the walkway also contained messages and the likeness of Andrew in the cockpit of a Cessna.

Andrew's garden was his troop's project, the idea of fellow Scout Joe Pozgay, 16, of Wading River.

"I think people should really know who he was," Pozgay said.

Andrew, as family and friends said, persevered in all that he was interested in during his young life: trips around the world, skiing, painting, aviation camp. Practically every night, he'd summon his parents to his bedroom so they could discuss a deep thought he had, or have them explain things, or ask details about where they were going to book the next vacation, his mother recalled with a laugh.

A few months ago, in a 12-hour day, Andrew's fellow troopers rolled up their sleeves, dug up the earth and planted the flowering bushes.

John McMorris, also a Scout leader, thought it was a much-needed project for the troop, ever since his son was struck in late September in Manorville as the troop was heading back from a hike through the woods. The driver , Thomas Murphy, 60, of Holbrook, has pleaded not guilty to aggravated vehicular homicide and other charges in the crash that also injured four other scouts.

"I think this project represented grief in action," the father said.

At the center of the garden is a young dogwood tree, donated by a local Girl Scout unit. Andrew's sister, Arianna, is a Girl Scout, and her mother is a leader.

Alisa McMorris chuckled about the donated tree in remembering how her two children debated about who was best, the Girl Scouts or the Boy Scouts.

But as she stood on the brick walkway and looked down on the red rocks that she and her husband laid by the tree, with the bushes fanning out, she thought her son would also have enjoyed the garden's symmetry.

"He would've really liked the order of the garden," the mother said.

Nowadays, the two Scout leaders and their Girl Scout daughter have had to find what the father calls "a new way of symmetry" without their Boy Scout son. They are working with parents of drunken driving victims across the country and lobbying the State Legislature to lower the drunken driving limit from .08 percent to .05. They're working with sponsors of the bill and other initiatives to stop drunken driving.

They know that despite what they call "the Andrew effect" — signs seemingly from the boy — they'll never get him back.

"You don't want his death to mean nothing," Alisa McMorris said. "We don't want people to forget him and any other victims. It's high time we grounded all drunken drivers."