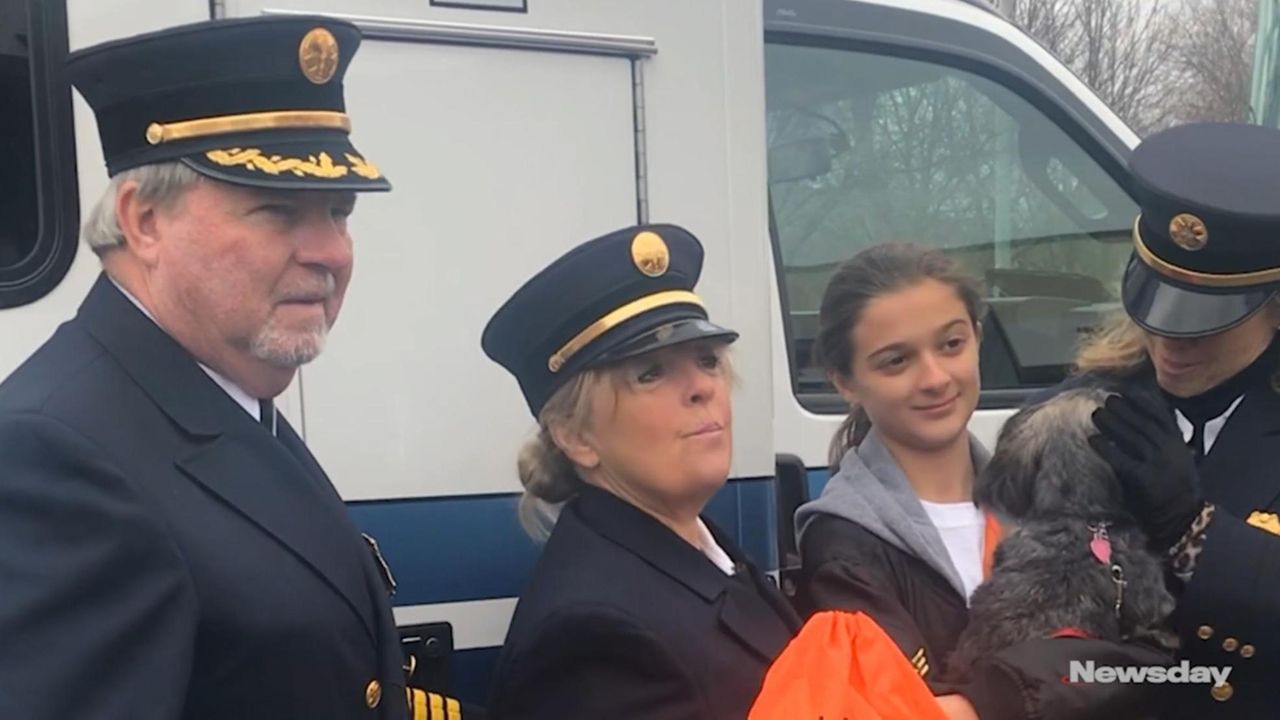 Victoria Glass of Lake Grove gave oxygen masks for use by animals trapped in structure fires to the Bay Shore Fire Department and the Bay Shore Brightwaters Rescue Ambulance on Saturday. Victoria, 13, raised part of the money for the masks through her charity, “Lucy’s Legacy and Hope for Animals,” which helps animals in need. Credit: Newsday / Jean-Paul Salamanca

The efforts of a Lake Grove teenager may help save animals from life-threatening smoke inhalation during fires, Bay Shore emergency responders said.

Victoria Glass, 13, and her mother, Joyce Glass, on Saturday presented two oxygen masks for use on animals trapped inside burning structures to the Bay Shore Fire Department and Bay Shore Brightwaters Rescue Ambulance.

Victoria said she wanted the fire department to have the proper equipment to save animals trapped in fires in homes or commercial buildings.

“I figured that if there are oxygen masks for people, there have to be some for dogs, and that it was just as important to help them,” Victoria said. “The need was just as great for animals as there is with people.”

An eighth-grader at The Stony Brook School, Victoria said her classmates raised $450 for the Bay Shore masks by making and selling 400 bracelets. The proceeds benefited Victoria’s charity “Lucy’s Legacy and Hope for Animals,” which she started when she was 8 to help animals in need.

Victoria has previously raised $850 through door-to-door donations to her charity that she used to buy 10 animal oxygen masks that were donated to fire departments in Brentwood, Stony Brook and Centereach, as well as the Long Beach Animal Shelter.

Roy Ekelund Jr., second assistant fire chief of the Bay Shore Fire Department, said the department had saved several cats and dogs from fires in 2018, and the masks would help to protect such pets.

“This is a very useful tool because animals tend to hide and get scared whenever they hear the sirens, the yelling, the fire, the commotion,” Ekelund Jr. said. “Now that we have actual masks set up when we bring them out and be able to do this job, it’s very useful.”

Dana DeQuatro  and Monica Attisani, who serve on the board of directors for the Bay Shore Brightwaters Rescue Ambulance, said their volunteer ambulance service had treated animals for smoke inhalation during emergency calls. Victoria's mask will be placed in one of their ambulances.

“We’re very impressed by Victoria. She inspired us,” Attisani said. “Anything we can do to help her cause, we’re on it.”