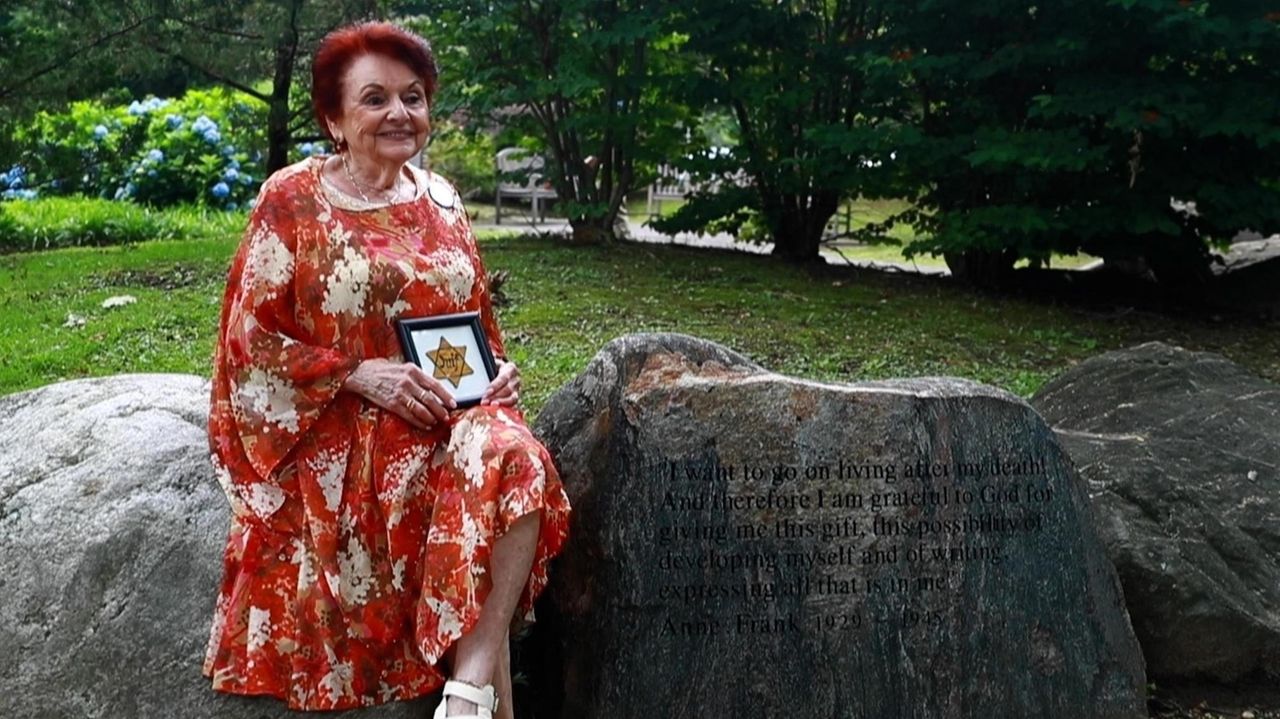 Rachel Epstein, 89, of Roslyn, is a survivor of Nazi-controlled France whose parents were murdered in the Auschwitz concentration camp, on Sunday delivered her powerful survival at the 10th Annual Anne Frank Memorial Ceremony in Melville. Newsday's Steve Langford reports. Credit: Newsday / Raychel Brightman

On Sunday, Epstein, who lives in Roslyn, stood next to the memorial garden in Melville named for Frank and recounted how they were both young Jewish girls hiding from the Nazis during World War II, living in fear and depending on the brave actions of the families sheltering them.

Frank died at 16 in the brutal concentration camp at Bergen-Belsen in Germany, but her legacy has remained vital with her posthumously published diaries.

Epstein has spent years telling her harrowing story of survival in France — but it hasn’t been an easy task.

"It has been difficult for me to discuss my childhood for all those years because the memory of the Holocaust hurts my heart," Epstein said. "I have been telling my story because I realize how important it is to keep the memory alive for future generations."

The annual Anne Frank Memorial Garden Ceremony at Arboretum Park is designed to celebrate the life of the brave girl whose writings showed the hope she had, even in the darkest of times, while reminding people of the horrors of the Holocaust and ongoing need for tolerance among all groups — ethnic, religious and racial.

Passages from her diary are inscribed in stone markers around the garden. One reads: "I want to go on living even after my death! And therefore I am grateful to God for this gift, this possibility of developing myself and of writing, of expressing all that is in me. "

The circular path represents different stages of Frank’s life and the centerpiece is a sculpture of a young girl’s dress.

Suffolk County Legis. Susan A. Berland said Frank had a "genuine belief in the goodness of mankind despite the ugliness of war and discrimination."

"We are here to celebrate what would have been Anne’s 92nd birthday on June 12," Berland said. "May her words and her insight continue to teach and inspire us all."

The crowd listened intently to Epstein as she recounted her experiences during the war. She and her younger brother had a happy life with their parents in France until July 19, 1942, when police came and took her parents in for questioning. They returned to pack a bag for a ‘trip.’

She and her brother never saw them again. She later learned they died at Auschwitz.

"So began our new lives as Jewish children being saved and hidden by a Christian family who put their lives on the line every day for the next three years," she said of neighbors Henri and Suzanne Ribouleau.

She remained in close touch with the Ribouleau family after the war when she was sent to the United States by relatives. She met her husband, Izzy, in Brooklyn. The two are still together 70 years later, with two daughters, four grandchildren and one great grandchild.

Epstein ended her emotional speech with Frank’s own words: "In the long run, the sharpest weapon of all is a kind and gentle spirit."