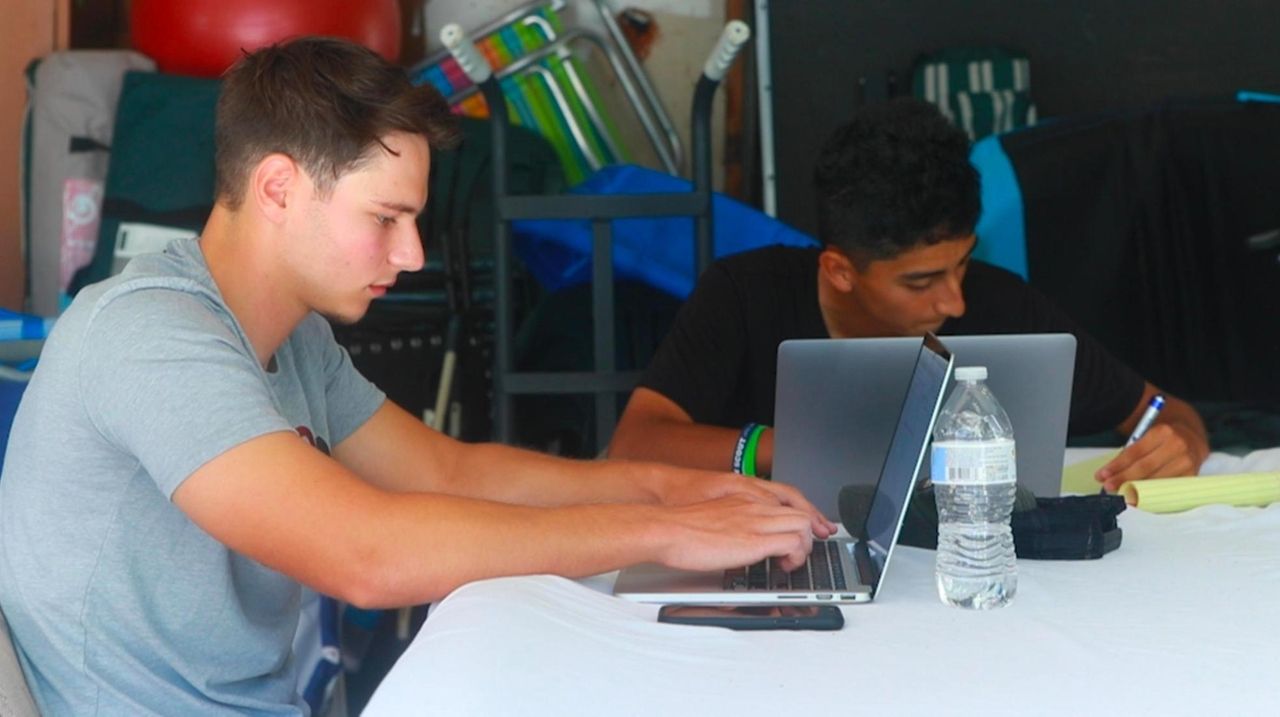 Two college students from Bellmore used their socially distanced home time during the pandemic to create an app that aims to help businesses with the growing trend of giveaways. Credit: Newsday / Raychel Brightman

Being stuck at home during the COVID-19 pandemic proved to be fruitful for two college students from Bellmore who are about to unveil a new app that they created together while staying apart.

Alex Cifuentes and Ethan Silver, both 19, this month will launch Kalab, an app that aims to help businesses and influencers better organize the social media phenomenon known as giveaways.

The Mepham High School graduates, who have been friends since they were 6 years old, had long shared a desire to start their own businesses, Silver said. In April the pair began discussing the rise in social media giveaways, which can range from a free Facetime session with an influencer to a taco from a restaurant.

But Cifuentes said he also began noticing how the giveaways — usually on Twitter and Instagram — were not as impactful as their potential.

“I viewed it as kind of boring, not engaging,” said Cifuentes, a sophomore at Penn State majoring in mechanical engineering. “Most people enter and then forget about it.”

One night the budding entrepreneurs came up with a way for giveaways to be better organized and marketed, and Kalab was born.

The free app has a template with questions that the business or influencer fills out that are then formatted. Submissions for the giveaway get voted on by the public and an algorithm sorts and filters the submissions for quality, pushing the more “liked” and “viewed” submissions to the top.

Giveaways are often limited to followers or subscribers on a particular social media site, Cifuentes said. With the app, giveaways are shown to all of Kalab’s users, providing a wider platform to advertise the contests. The app can also help college clubs, he said, allowing members to recruit and interact now that meeting on campus is a challenge.

Cifuentes and Silver also had that challenge. They at first developed the app by talking over Zoom. Then Silver would come over to Cifuentes’ house and they would sit in separate cars and share documents on their devices or socially distance in the backyard or garage.

“They’ve worked tirelessly on this app, day and night,” said Cifuentes’ mother, Vivian Martinez, 44. “They’ve done so much research, they’ve done PowerPoint presentations, contracts, set up an LLC, all on their own. I always tell him, even if this doesn’t get big, he and Ethan have learned so much.”

The pair have invested about $15,000 into the business, and a Kickstarter campaign has netted $7,600. Cifuentes said the business — which also has 15 interns — has gotten commitments from 150 companies and influencers to use the app.

One of those is Kevin Carman, 24, owner of Locals Only LI, a Malverne-based apparel company that does regular giveaways.

“I’ve never heard of anyone else doing this,” he said of the app. “I run these giveaways so why wouldn’t I want a service that can provide more organization for me and help?”

The most-downloaded apps for 2020