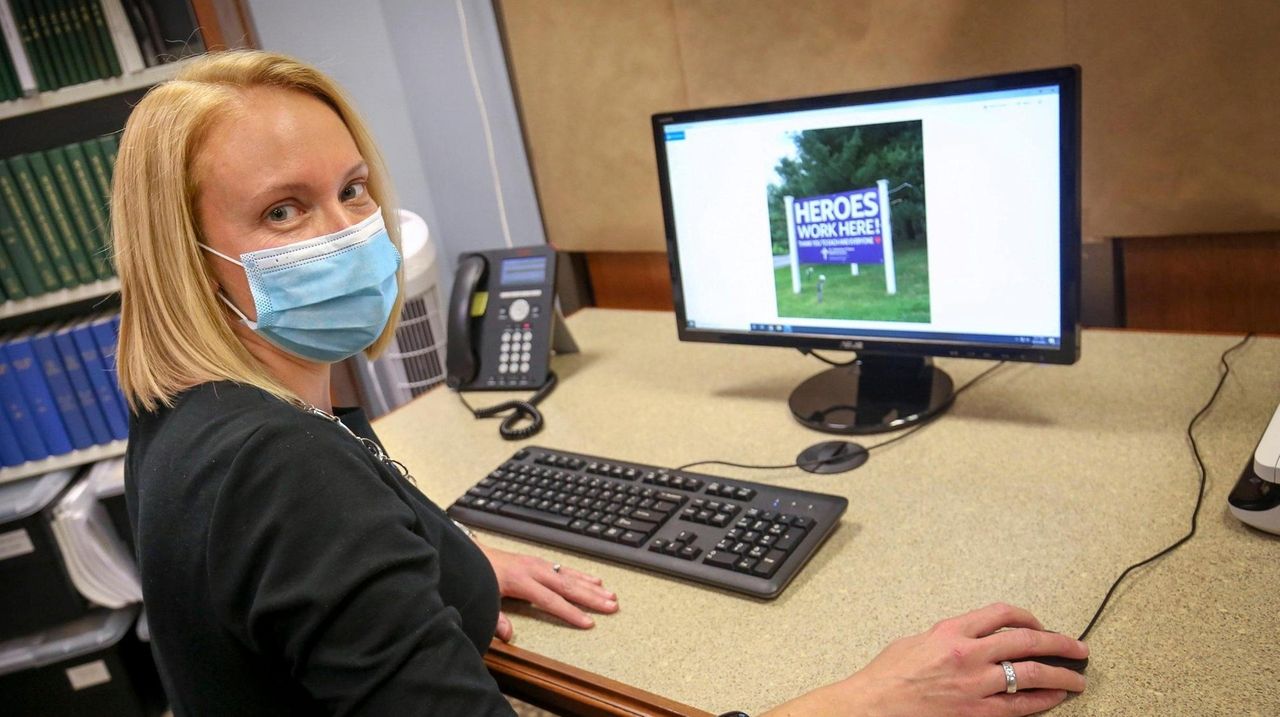 Head of the Richard H. Handley Collection of Long Island Americana, Caren Zatyk, understands the importance of recording history. She spoke to Newsday about how she has been documenting this unprecedented time. Credit: Newsday / John Paraskevas

A college graduate tosses her cap into the air outside St. Joseph’s College in Patchogue, celebrating alone because the formal ceremony was postponed. A Smithtown family unable to gather in person celebrates Passover Seder in separate Zoom boxes. A nurse from Valley Stream dons ski goggles for on-the-job protection.

These are images from archives of the pandemic being curated by a number of Long Island libraries and cultural institutions. Along with written and oral accounts and objects like PPE, yard signs and artworks, they form a growing record of Long Island life in an unsettled age.

"We have never tried to collect history as it’s happening," said Caren Zatyk, head of Smithtown Library’s Long Island Room, where the collection of maps and documents extends back to the 17th century. "We realized this is a historic and significant event… We want to show future generations what things were like."

Most of these projects are open-ended, assembling dozens or hundreds of digital and physical artifacts that may be used in the future for exhibits or research; some are already accessible online.

In Smithtown, Zatyk and two colleagues, Kelly Filippone and Kelsey Renz, fanned out across the town’s hamlets starting last spring, photographing and collecting at schools, businesses, homes and places of worship. The collection includes government health advisory mailers and newspaper covers about the virus death toll. There are happier items too, and ones that may bear explaining to anyone who did not live through 2020, like banners from the ritual of the birthday car parade.

They are asking town residents to submit their own material: digital-only now, though they may also accept objects in the future. Maureen Smilow, 70, a retired Smithtown School District social studies teacher who lives in Village of the Branch, submitted the Seder photographs. One shot shows her computer monitor with six Zoom boxes: one for her and her husband and five for their children scattered across the world. It was the first time in years the family had not gathered for Passover. "It was the novelty of it, of something so different, and in a sense I wanted to remember this," Smilow said. In the moment she snapped that photograph, "I felt very sad. We missed the kids so much. We hadn’t seen them in a long time and we knew this thing could go on for a long time."

The work is in some ways a continuation of what Long Island's public libraries — many with staff and repositories dedicated to local history — were doing before the pandemic, said Keith Klang, director of the Port Washington library. The public library "serves the very community it resides in," he said. "We are showing now at a local, micro level, how did our community deal with this crisis."

Items Port Washington archivist Vanessa Nastro has assembled include a face shield from a batch the library's 3-D printer churned out for St. Francis Hospital and journal entries about life during the pandemic from the library's English For Speakers of Other Languages classes.

She realized early on that "I couldn't save everything," she said, and so limited herself to the hyperlocal, with an eye toward potential users: people doing school or family research, or artists looking for inspiration. An emerging theme of her material, she said, is the miniboom that occurred when the hamlet's wealthy second-home owners arrived months ahead of schedule last spring. Their coronavirus experiences differ markedly from those of less wealthy year-round residents, some of whom turned to food pantries for the first time in their lives, or came to the library for free WiFi. Sag Harbor is "thought of as this wealth center," she said, but "there is a working class year-round economy of people who are struggling to make it and now even more so...These are primary source documents for this economic disparity."

Lauren Brincat, Preservation Long Island curator, also collected deliberately, buying a quilt and a print from "A Wishful Gesture," a weeklong outdoor installation in June at Gallery North in Setauket. The pieces were intended to show the community's support for Black lives, and accompanying photographs of attendees at the installation in the Preserve collection give important context: they show "people coming in very small groups, all wearing masks to take a moment to reflect on history as it's happening," Brincat said.

Brincat said she'd had to work fast to preserve material that might have deteriorated in the outdoors. Archivists are facing other challenges, too: Some of their organizations closed last spring and have reopened with safety protocols that can make collecting difficult. "Normally we’d go to someone’s house" to evaluate material, said Long Island Museum curator Jonathan Olly. They're not doing that now. Nor are they taking objects — for example, signs thanking healthcare workers — that are still in use.

Another problem is that "in the past, say, for an election or a hurricane, we’ve had known start and stop dates," he said. Does the period of interest in this case close when a vaccine is released, or the New York State mask mandate ends? he asked. He had no good answer.

"I don’t know how you declare this over," he said. "When does life return to normal?"

Doctors on alert for condition that develops in kids after COVID-19
Hochul seeking to speed casino licensing with eye on downstate
1:45
Forecast: Up to 17 inches of snow expected as massive storm moves in
Panel: Make overtime pay easier for farmworkers
2:20
Governor extends mask mandate for indoor public places to Feb. 10
3:06
Thousands gather to honor slain NYPD Officer Jason Rivera, a 'hero' who wanted to make a difference
Didn’t find what you were looking for?