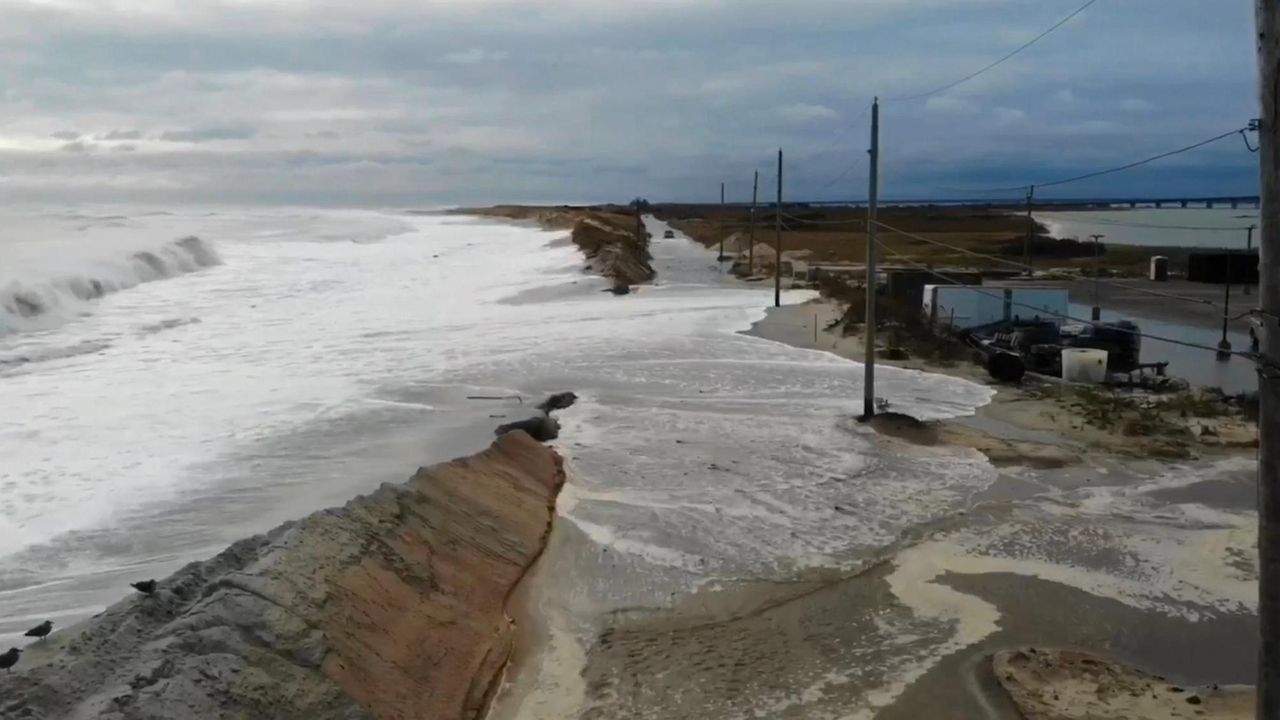 A U.S. Army Corps of Engineers project will shore up a vulnerable yet vital stretch of Dune Road. Credit: Newsday / Vera Chinese

A $10.7 million federal project to shore up the severely eroded Hampton Bays beach protecting New York’s second-largest commercial fishing port began on Monday and is expected to be completed by the end of March.

An offshore dredge will essentially vacuum sand off an ocean sand bar and deposit it back on the Dune Road beach, Col. Thomas Asbery, U.S. Army Corps New York District commander, said Monday during a news conference at the nearby restaurant Sunday’s on the Bay. The work will restore the beach to what it was when the Army Corps initially performed the West of Shinnecock Inlet project in 2005 with a 15-foot-high dune and a 140-foot-wide berm from the toe of the dune.

“To put this 600,000 cubic yards of sand into perspective, it would fill a football field approximately 285 feet high,” Asbery said.

Still, the new sand will eventually wash away and the Army Corps will look to renourish the area every three to five years, Asbery said.

The barrier island's east end had sustained several washovers since October, putting millions of dollars’ worth of infrastructure in jeopardy. The area, home to the Shinnecock Commercial Fishing Dock, a marina, three restaurants and a coastal escape route, is vulnerable to erosion because the jetties along the Shinnecock Inlet disrupt the natural flow of sand.

U.S. Rep. Lee Zeldin (R-Shirley), who along with Sen. Chuck Schumer (D-N.Y.) had pushed for the work to be fast-tracked, stressed the importance of the project that last month was awarded to Great Lakes Dredge & Dock Company of Oakbrook, Illinois. Two Southampton Town officials at the news conference, trustee Ed Warner Jr. and Councilwoman Julie Lofstad, earn their living through fishing businesses based at the dock.

“This is a $10.7 million investment in our economy and our way of life,” Zeldin said. “The cost of not doing it would have been substantially greater.”

Some environmentalists questioned whether the Army Corps’ schedule would keep pace with erosion.

“It needs to be routine to be effective,” said Kevin McAllister, president of the Sag Harbor-based group Defend H20, who has advocated for retreating from areas vulnerable to erosion. “Three to five years is not routine.”

The Army Corps can, however, act following a storm-related emergency.

Suffolk County undertook a project in November to dredge 90,000 cubic yards of sand and build a berm along the beach following the autumn storms, although much of it had been washed out by year's end, underscoring the need for federal help.

“Honestly, I didn’t know we were going to make it to April,” said Southampton Town Supervisor Jay Schneiderman. “We’ve been doing our best, but we are really at the end and we needed help on a much bigger level.”

3, 4 or 5 / Number of years before another replenishment will be needed