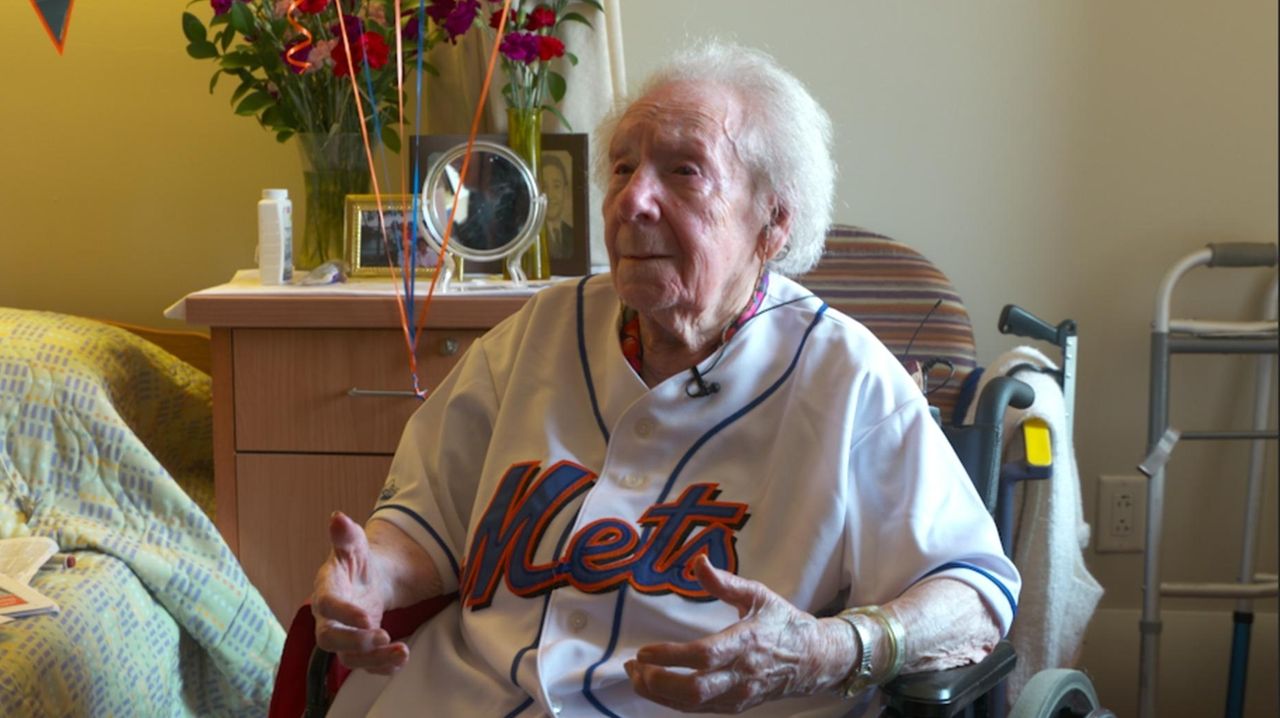 Rudal "Rudy" Ahlen, who is 101 years old, has been rooting for the New York Mets since they started playing. Originally a Brooklyn Dodgers fan, she switched allegiances when the "Bums" moved to Los Angeles. But ever since, she has remained faithful to her "Amazins." A former player herself, she was the only woman on an all-male seniors baseball team on Long Island in her earlier days. Ahlen chatted about her favorite pastime from her room at Gurwin Jewish Nursing & Rehabilitation Center in Commack while watching the game, decked out in her Mets gear on opening day, Monday, April 3, 2017. Credit: Newsday / Chuck Fadely

Rudal Ahlen has had a very long love-hate relationship with the New York Mets.

At 101, the Commack resident said she’s been cheering for and “yelling at” the Mets since they began playing at the Polo Grounds in 1962.

Before that, Ahlen was a Dodgers devotee up until the day “Dem Bums” broke her heart and those of legions of other Brooklyn faithful when they skipped town for Los Angeles after the 1957 season.

“I was so mad when they left, I found another team to root for,” said Ahlen as she intently watched Mets outfielder Curtis Granderson strike out swinging in the Mets’ opener Monday against the Atlanta Braves. Ahlen, who has 10 grandchildren, 15 great-grandchildren and 5 great-great grandchildren, swatted at the armrest of her wheelchair in frustration.

“What’s a matter with you guys?” she yelled at the television mounted in her room at the Gurwin Jewish Nursing Rehabilitation Center in Commack.

Each morning during the baseball season Ahlen, who goes by “Rudy,” scans the sports pages of Newsday and the Daily News for Mets updates with the aid of a magnifying glass about 6 inches in diameter. She clips stories and boxscores and keeps them in a neat stack by her bed.

Sometimes she sends the clippings to her friends and often writes to discuss Mets prospects with her sister, Shirley Geller, 99, a die-hard fan living in Florida.

A few years ago, Ahlen said she could rattle off statistics like the batting averages and ERAs of her favorite players. Her memory’s since slipped a bit, Ahlen said, but she can still remember clearly the last time the Mets won the World Series in 1986.

“Ron Darling was pitching, Keith Hernandez was first base and Gary Carter was catching,” said the mother of eight. “I was very happy. I remember yelling and screaming.”

Ahlen said her fascination with baseball began when she was a teenager in Brooklyn and would visit different baseball fields to watch recreational and high school teams.

She would later teach her two sons to play the game, sometimes helping coach their Little League teams. And at age 65, she was the only woman to play in an all-male league for seniors in Smithtown.

“I wasn’t much good, but I could keep a hold of the ball,” Ahlen said of her playing days.

For opening day Monday, Ahlen wore an oversized Mets jersey and staff at the rehabilitation facility decorated her room, hanging blue and orange balloons beside Ahlen’s signed picture of former Met second baseman Daniel Murphy, which she received as a gift from her children for her 100th birthday.

Ahlen cheered as the Mets took the lead in the bottom of the seventh, scoring six runs to secure their first win of 2017.

After the final Brave grounded into a double play to secure the Mets’ victory, Ahlen said she was thrilled and hopeful it was the first of many.

“It’s a good sign for the rest of the season,” she said.