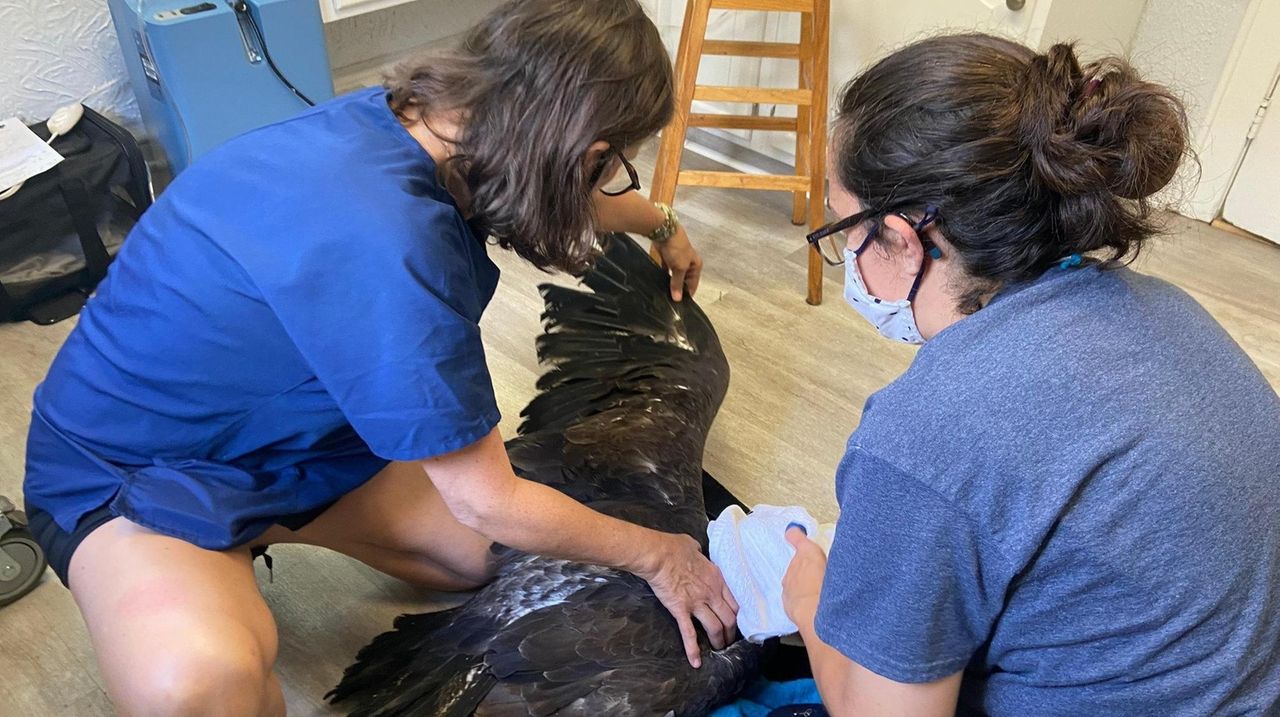 Wildlife rehabilitators rescued a baby eagle that had fallen 80 feet from its nest and was being attacked by other birds in Nissequogue Village this week. Credit: Nissequogue Golf Club

Wildlife rehabilitators made a rare rescue in Nissequogue Village this week of a baby eagle that had fallen 80 feet from its nest and was being attacked by other birds.

Janine Bendicksen, director of wildlife rehabilitation at the Sweetbriar Nature Center in Smithtown, said she used a towel, warm fluids and a borrowed bucket truck to secure, treat and return the bird to its nest at the Nissequogue Golf Club on Tuesday after a tip from the club groundskeeper.

Bald eagles were once virtually eliminated from New York State. They rebounded in recent years, with at least 15 active nests on Long Island. For the past several years, people have reported seeing bald eagles around Stony Brook Harbor, said a spokeswoman for the state Department of Environmental Conservation.

Sweetbriar, an independent not-for-profit, uses grants and donations to fund its rescue work. Many of the calls its rehabilitators get about downed eagles turn out to involve "pigeons or hawks," Bendicksen said. But she knew, pulling up in a golf cart with club employees shortly after 11 a.m. Tuesday, that the tip had been good: In front of her was a young eagle with a 6-foot wingspan being attacked by robins and red-winged blackbirds who saw it as a threat.

The eagle, which she said was likely female and about a month and a half old, was too young to fly and had probably "misstepped" during a learning stage where young eagles "grip and jump, go from branch to branch," Bendicksen said.

Rehabilitators netted the eagle, which struggled until Bendicksen draped a towel over its head. She then carried it "kind of like you’d hold a football under your arm," securing its wings and talons that could have sliced her flesh to shreds.

At Sweetbriar, Bendicksen and colleagues intubated the eagle to feed it a solution of salts. Their physical examination showed no injuries.

That afternoon, they returned to the nest, hitching a ride in the bucket of a tree-service truck that had been working at a private property near the golf course.

Eagle nests may weigh more than a ton. This one — in the upper branches of an old-growth oak — was more than 5 feet in diameter. Bendicksen spotted another sibling eagle on a nearby branch and deposited her charge in the nest. "I think I was walking on a cloud," she said. "I think everybody was."

The rescue came as officials in neighboring Head of the Harbor asked residents in a municipal website post to be cautious using fireworks this summer because of the eagle population.

"Tone it down a bit when you’re near the shoreline," said village Mayor Douglas Dahlgard. "You don’t know where the eagles’ nests are, so just be careful."

DEC spokeswoman Aphrodite Montalvo said in an email that bald eagles were sensitive to a variety of human activities, including fireworks detonation. Agitated "eagles may inadequately construct or repair their nest, may spend too much time defending the nest instead of caring for their young" or even abandon their nest, she said.