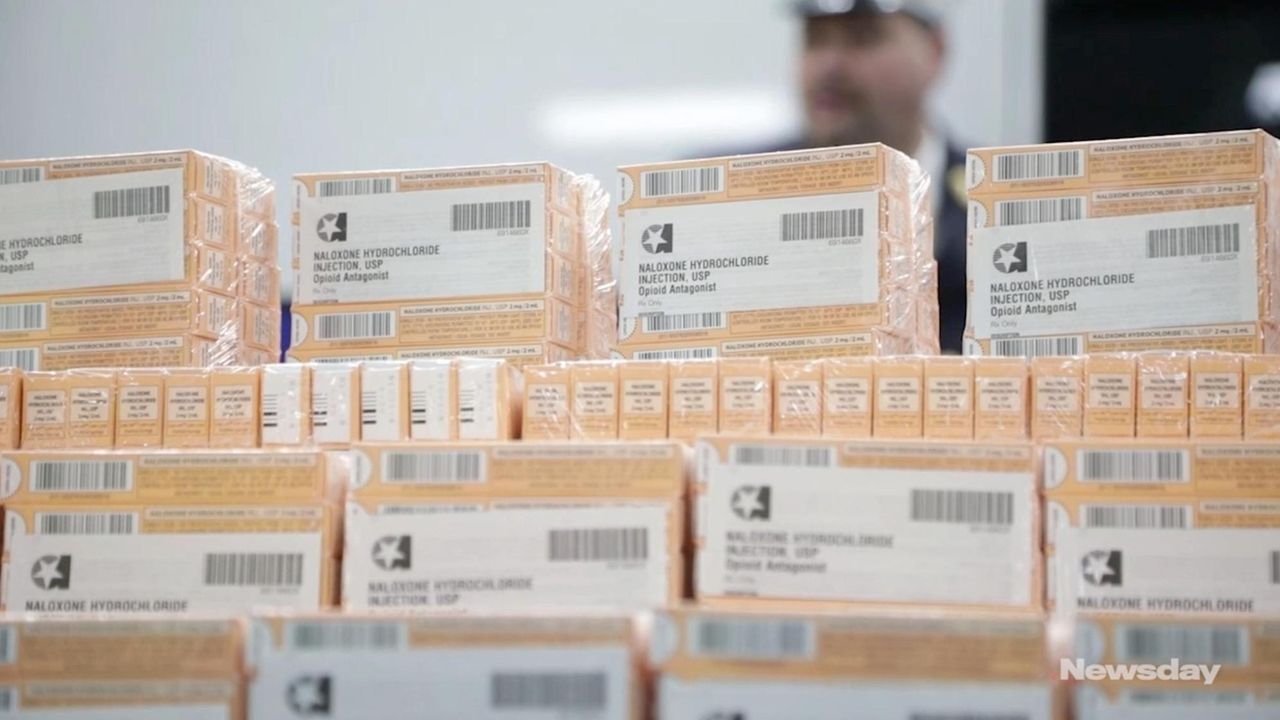 Tom Dolan, the CEO of the Babylon Industrial Development Agency, announced the donation of more than 800 naloxone kits to EMS and fire departments within the Town of Babylon to help treat victims of opioid overdoses.  Credit: Yeong-Ung Yang

The Babylon Industrial Development Agency has donated 847 overdose-reversal drug kits to town fire and emergency service departments as the price of the drug continues to climb.

The drug, naloxone hydrochloride, stops an opioid overdose in its tracks, saving countless lives, and is used by first responders, and handed out to the public by community organizations and hospitals and can also be purchased at pharmacies.

Often referred to as Narcan, one of the well-known brand names, the drug’s cost has shot up in recent years.

David Roth, EMS supervisor for Copiague Fire Department, said in past years, they have paid $9 or $10 per single dose, a 2 mg vial. Currently, it’s $35 per dose in injectable form. In the form of nasal spray, which is easier for the public to use, it cost about $45.

“I have been on numerous overdose calls, as I am sure every firefighter here has, and I have seen the effects of Narcan firsthand,” town Councilman Terry McSweeney, a member of the FDNY, said Tuesday morning at the Copiague Fire Department building on Great Neck Road.

According to a November 2018 study from researchers with the Food and Drug Administration Center for Drug Evaluation and Research, between January 2006 and February 2017, all forms of naloxone increased in price except Narcan nasal spray.

They cite increased demand before 2012, and a drug shortage since 2012 as possibly causing increases.

The donation helps reduce the financial burden on the 10 fire departments and Wyandanch Wheatley Heights Ambulance Corporation. The stacks of vials will last the town about a year, officials said.

“Unfortunately, this may go a little faster than we would like,” Copiague Fire Department 1st Assistant Chief Dominick Nuzzi said.

First responders in the town treated about 400 people for overdoses in 2018, McSweeney said. There have been 28 town wide so far this year.

Often, more than one dose is administered to a person overdosing, so the 847 vials will probably be used on half as many people, Nuzzi said.Terri Kroll’s son, Timothy, died of an overdose in August 2009 at age 23.

A Lindenhurst resident and president of anti-drug organization Copiague Community Cares, Kroll noted the importance of having the drug available to stop overdoses from killing people.

Her organization has started a pilot program with local hospitals, following up with people who have overdosed to offer support and help them get treatment.

Tom Dolan, CEO of the Babylon IDA, said, “We truly hope that it provides a second chance for many people struggling with addiction.”