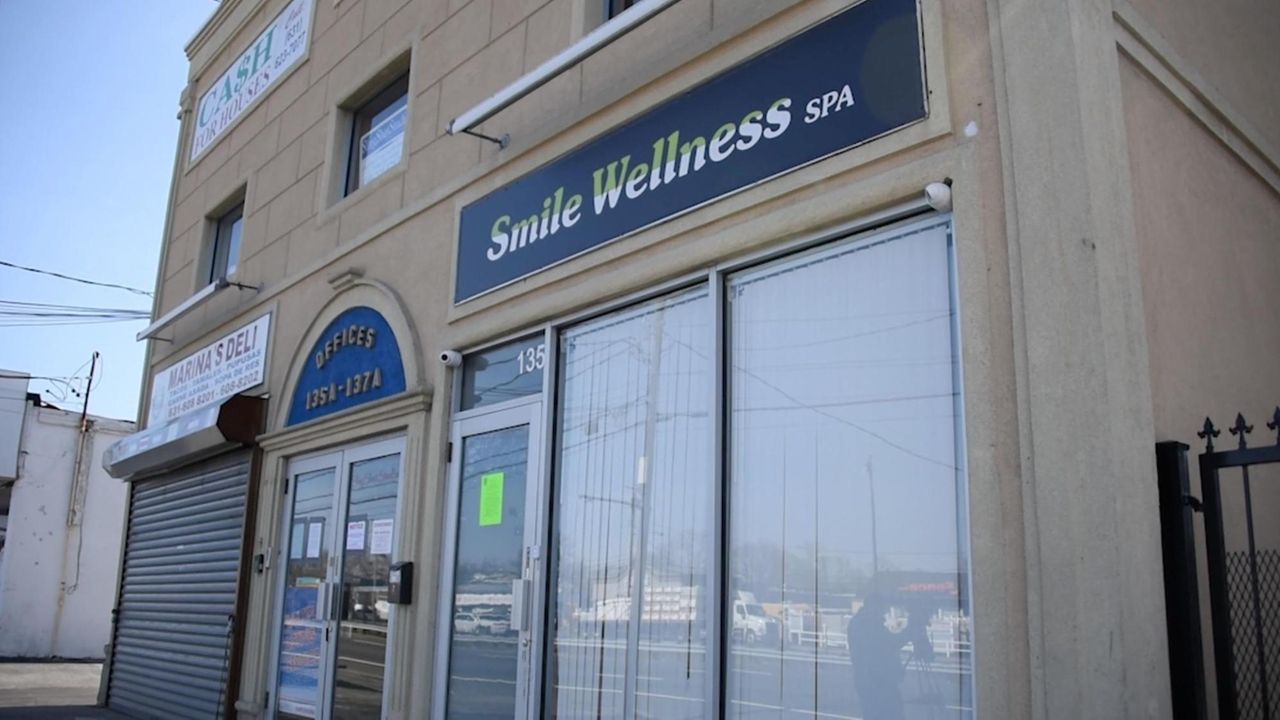 Babylon officials announced on Wednesday the closures and arrests made at four illegal massage parlors in the town as part of a crackdown. The news conference was held outside Smile Wellness Spa, one of the parlors shut down, according to officials. Credit: Danielle Silverman

Officials shut down four illegal massage parlors — including one for alleged prostitution — last week in Babylon Town as part of a crackdown.

Babylon Town Supervisor Rich Schaffer and Councilman Terry McSweeney announced the closures and arrests at a news conference outside Smile Wellness Spa on Sunrise Highway in Amityville Wednesday morning. That business was closed and two women, aged 54 and 56, both from Flushing, were arrested on prostitution charges, said Suffolk County Police Inspector Kevin Kane of the First Precinct.

Kane said the women were arrested March 7 after undercover officers got massages from the women and were “propositioned [for] a sex act for a set amount of money.”

McSweeney said the town received tips from residents and “we started the investigation and we were unpleasantly surprised with the results.”

The crackdown, led by the town’s Quality of Life Task Force, resulted in 38 violations and summonses to seven businesses, four of which were shuttered.

“This is about shutting down the bad guys who give the industry a bad name,” McSweeny said.

Marla Kaplan, a Babylon resident who owns Hands on HealthCare Massage Therapy and Wellness Day Spa in Commack, said the illegal businesses “often sabotage the legitimacy of real massage therapy centers,” like hers, where the massage therapists are licensed by the state.

Kaplan said with the prevalence of parlors that offer sex acts, clients enter her business and are aggressive, “wanting certain services.”

Smile Wellness Spa was closed for the alleged prostitution charges, as well as for not having a massage establishment license, for plumbing violations, for electrical hazards, for having no carbon monoxide detector and for lacking a certificate of occupancy, according to the town.

Kane said there’s “no overt indication that there was human trafficking involved” in the Smile Wellness Spa.

The three other shuttered establishments are Wellness Center for Life on Montauk Highway in Copiague, Hawaii Foot and Spa on Grand Boulevard in Deer Park and Minerva Nail and Foot Spa on Deer Park Avenue in Deer Park.

None of those establishments is alleged to have offered sex acts to customers. They were closed for violations including operating without massage licenses, lacking certificates of occupancy, and having serious building, plumbing and electrical safety issues, according to the town.

Three additional massage parlors in the town were issued summonses for town code violations but were not shut down, officials said.