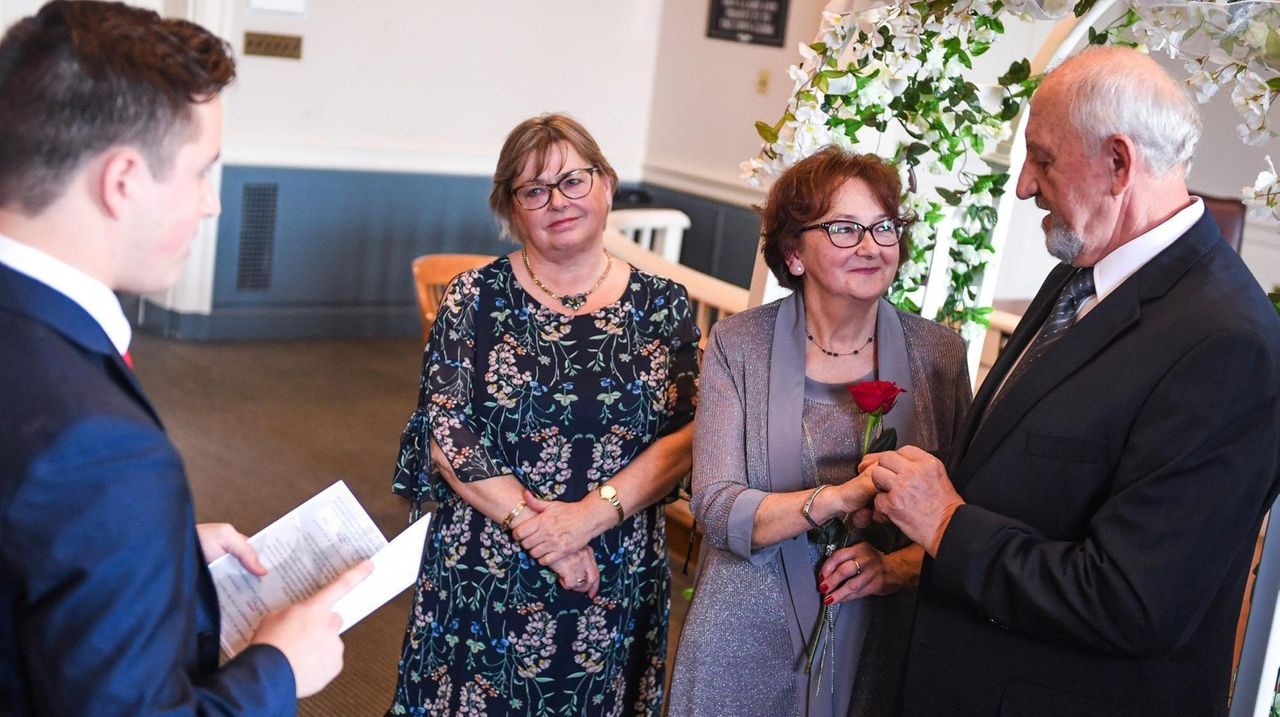 Now the Town of Babylon is hoping to make things a little clearer. The town has begun offering marriage ceremonies in Polish after a town employee who is fluent in the language, Jerzy Kruszlinski, became certified.

Last month the town had its first official Polish language ceremony for Andrzej Slodkowski, 69, and Izabela Jasinska, 62, of Lindenhurst. Slodkowski’s son, Dariusz Slodkowski, 48, of Allentown, Pennsylvania, said that though his father has lived in the country for more than 25 years, his English is limited.

“I was very surprised they offered this,” he said. “For people who just came to this country or older people who don’t know English well, it’s very helpful.”

Town Clerk Gerry Compitello said several months ago she was performing a ceremony for a Polish couple.  “As I was asking questions I realize they are saying yes and I don’t know if they know what they’re saying yes to,” she said. She ran to get Kruszlinski, 23, who is the executive assistant for Town Supervisor Rich Schaffer and is fluent in Polish, and later asked him if he'd like to become certified.

The Polish community in the town is centered in Copiague where the number of new immigrants exploded after the fall of the Soviet Union, residents said.

Walter Wesolowski, 47, came to Copiague from Poland when he was 16 years old. “I came here and I couldn’t speak a word of English,” he said. “So you go where your people are, you stick together.”

Over time, residents began opening up businesses. Now the community has not just one Polish deli, but five, Wesolowski said, along with multiple bakeries, dentists, accountants and the only Long Island branch of the Polish & Slavic Federal Credit Union. After settling in Copiague, residents said, many Polish immigrants eventually bought houses in next-door Lindenhurst, which now also has a burgeoning Polish population.

According to the U.S. Census Bureau’s 2017 American Community Survey, the Town of Babylon has 10,436 Polish residents, far surpassing even previous Polish hubs on Long Island, such as Riverhead.

Wesolowski's two teenage sons are fluent in Polish and attend Zbigniew Herbert Polish Supplementary School of Long Island Inc., which this year celebrated its 30th anniversary. When the school started, director Dorota Szczech, 44, said the school had 30 students. This year, the school had its highest enrollment ever, with more than 500 students, she said.

Szczech said she was thrilled to learn wedding ceremonies at town hall are now being done in Polish, and that it means more than just a service. This month, the town also started offering weddings in Creole.

“It’s nice to know that you don’t have to get rid of your traditions, your language, that it’s recognized as important,” Szczech said. “I think people feel like finally, we’re being recognized as a community.”

Here are 14 U.S. counties and their states with the largest populations of individuals with Polish ancestry.