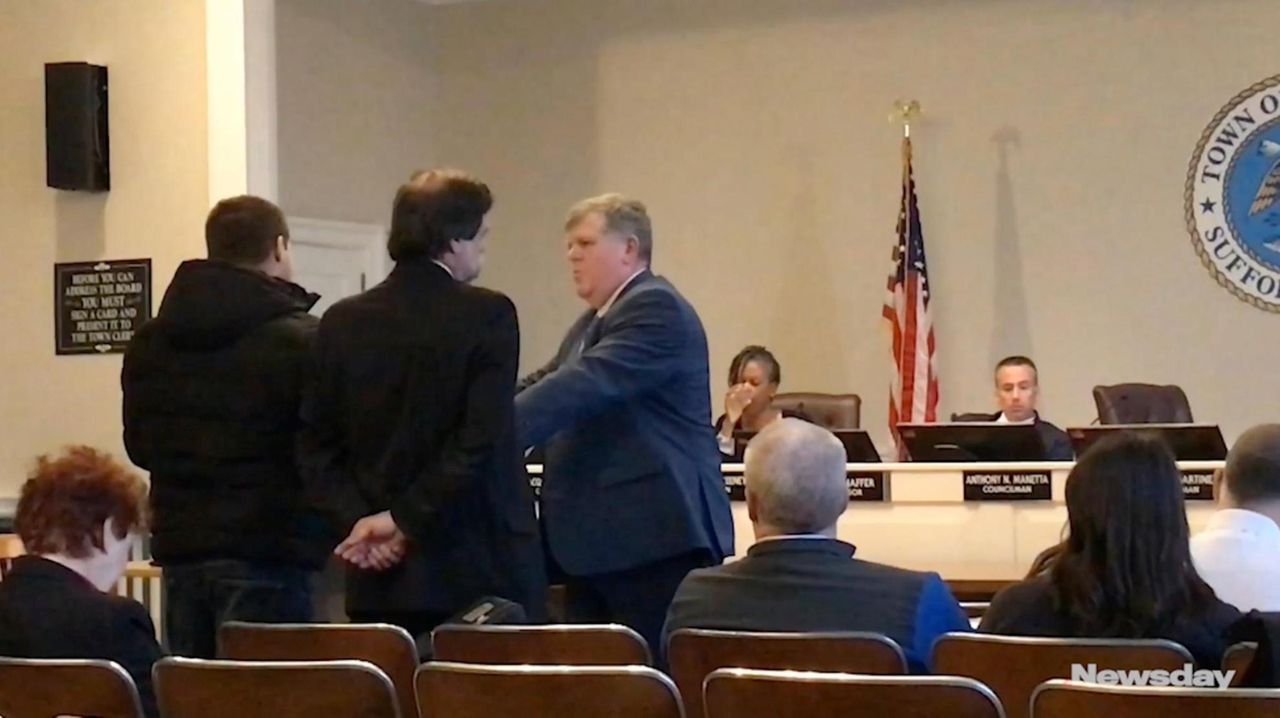 Babylon Town Supervisor Rich Schaffer spoke at a public meeting with Deer Park homeowner Louis Rosenberg and his son, Tyler Rosenberg, who will move out of the house so his father can continue to live there. Credit: Newsday / Denise Bonilla

A Deer Park homeowner agreed with Babylon town officials this week to evict from the family home his son, who has been accused of possessing illegal drugs, in an effort to prevent the town from boarding up the house.

Schaffer demanded Rosenberg and his three sons living at the home attend Wednesday’s meeting, during which Schaffer swore in all the family members who spoke. He later said he was trying to show the family the seriousness of the matter, although he apologized to Rosenberg for calling him a terrible father and said he had “lost his cool.”

Tyler’s mother, Angela Montigny, stated he was living with her in North Bellmore and Schaffer asked Rosenberg to sign an agreement that Tyler would no longer live with him. Rosenberg consented although the resolution to board up the house was tabled pending the signing of the formal paperwork.

When Tyler came to the podium, Schaffer stepped down from the dais to stand in front of him and his attorney, John Reno of Deer Park. He asked about Tyler’s life plans and offered anecdotes about successful substance abuse recovery.

“We’ve been chasing you . . . you’ve been on a good run,” he said. “But why don’t you use that for something else?” Tyler agreed to meet with a town substance abuse counselor and to meet with Schaffer to discuss his career path.

Schaffer said in an interview that he was playing “armchair therapist” in order to “get to the heart of the issue.”

“I did see something in his eyes, it was almost like a silent cry, like I can’t do this anymore,” he said. “If we can solve Tyler, a lot of people in Deer Park are going to be happy.”

Reno said he found the dialogue between Schaffer and the Rosenbergs “a bit out of the ordinary” but did not object because the family wanted to ensure they kept their house.

“We had to make a decision whether we play ball with them or go to war with them,” he said.